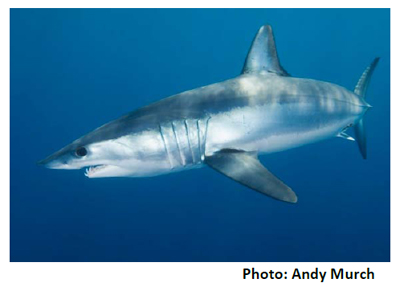 Globally, the shortfin mako (Isurus osyrinchus) is assessed as Vulnerable by the IUCN Red List of Threatened Species. The International Commission for the Conservation of Atlantic Tunas (ICCAT) ecological risk assessment of pelagic sharks caught in Atlantic longline fisheries, found shortfin makos, along with bigeye threshers, to be the most vulnerable to overexploitation. Historically, targeted commercial fisheries for shortfin makos took place in the eastern Atlantic, Mediterranean Sea, Gulf of Mexico, Caribbean, western and central Pacific, and off of Cuba and southern California.

Between 1986 and 2000, catch analysis of U.S. pelagic longline fishery logbooks report that mako sharks may have declined by 40 percent in the Northwest Atlantic. Since 1998, there have been few records of mako sharks in the central and eastern Mediterranean, an area where the species was previously considered common.

Of the pelagic sharks caught by Spanish longline fleets (targeting sharks and swordfish) in the Atlantic and Pacific Oceans between 2000 and 2004, 10 percent were shortfin makos.

Shortfin makos are regularly taken as bycatch in tuna and swordfish longline fisheries worldwide. As one of the only known predators of swordfish, they are particularly vulnerable to capture in the targeted swordfish fisheries in the Atlantic and Pacific. In addition, gillnet (drift and set) and hook-and-line fisheries throughout their range post direct threats to this species.

Despite the increasing importance of shortfin makos to pelagic fisheries worldwide, catches have been poorly reported, and catch data are incomplete. In addition, the extent to which finning of shortfin makos occurs in high seas fisheries remains unclear.

Shortfin makos are highly valued for their meat (commonly prepared for human consumption), skin, and fins, and their jaws and teeth are often sold and traded as ornaments. In addition, shortfin makos are prized by big-game sport fishers for their curiosity, speed, and their habit of leaping out of the water when hooked or in pursuit of prey. Recreational angling for mako sharks is particularly popular in New Zealand and South Africa, and recreational mako fishing has been reported in the Mediterranean.

The shortfin mako is a coastal and open ocean species. It is widespread in temperate and tropical waters of all the world's oceans. These sharks can also be found inshore where the continental shelf narrows, for example off the coasts of Southern Africa. Shortfin makos have also been sighted between 20-50° S between Australia and Chile, and to almost 60° southeast of New Zealand.

Shortfin makos are highly migratory sharks. For example, one study found that 36 percent of recaptured sharks were found further than 420 kilometers (260.97 miles) from their tagging sites.