Low reproductive capacity and high commercial value make porbeagle sharks (Lamna nasus) vulnerable to overexploitation and population depletion. According to the IUCN Red List of Threatened Species, the porbeagle is Vulnerable globally, Endangered in the Northwest Atlantic, and Critically Endangered in the Northeast Atlantic and Mediterranean Sea. Globally, catches peaked in the mid-1960's (reported catches under 10,000 tons) and since then there has been a declining trend with less substantial peaks around 1970 and 2000.

In 2000, the biomass of the porbeagle in the Northwest Atlantic was estimated between 11 and 17 percent of unexploited levels. In the Southwest Atlantic, Uruguayan longline fleets have shown over 90 percent declines in porbeagle landings between 1988 and 1998. There is not much information available on the status of porbeagle populations in the Southern Ocean. Despite the large amount of fishing activity targeting porbeagles in the Southern Hemisphere, New Zealand is the only country in that hemisphere reporting landings to the UN Food and Agriculture Organization (FAO).

Since the 1970s French and Spanish longliners have operated directed fisheries for porbeagle. Porbeagles form a large portion of the bycatch of Japanese longliners in the Southern Hemisphere, and are the second most common shark species caught as bycatch in New Zealand's longline fishery. Porbeagles are most notably targeted in the North Atlantic and Mediterranean for human consumption and as targeted bycatch across their southern distribution. In addition, the porbeagle's skin is used for leather and its organs for liver oil and fishmeal.

Porbeagles are a valuable secondary target of many fisheries, particularly longline fisheries, as well as gillnet, driftnet, pelagic, and bottom trawl fisheries. Despite the market for porbeagle meat, many boats, particularly those with limited holding space, will keep the porbeagle's fins for use in shark fin soup and discard the rest of the body.

The porbeagle shark is a wide-ranging coastal and oceanic species found globally in temperate and cold-temperate waters, most commonly on continental shelves and in concentrated numbers in the North Atlantic and in a band of temperate water in the southern Atlantic, southern Indian Ocean, southern Pacific, and Antarctic Oceans. In the Southwest Atlantic Ocean they are found below 26°S and in the Southeastern Pacific, between 23 and 37°S. 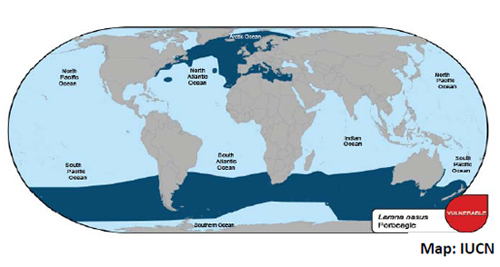 Though porbeagles have virtually disappeared from the Mediterranean, studies have found that the Mediterranean appears to be an important nursery for northern populations. Normally, the North Atlantic porbeagle population only migrates as far south as South Carolina and the Gulf of Guinea, but pregnant females from the western North Atlantic population have been known to range into the Sargasso Sea, almost as far as Hispaniola, to give birth.