This briefing published by OCEAN2012 exposes how overfishing  harms the EU's coastal communities and affects the lives of  countless Europeans.  It is the first in a series of briefings illustrating the impacts of overfishing on people or marine ecosystems caused by the excess removal of millions of tonnes of marine life every year. 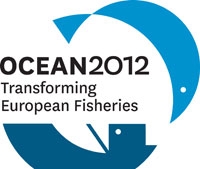 This report is avaliable in multiple languages. Download the complete document in the Downloads section above.

In 2010 jellyfish blooms (swarms) reaching plague proportions led local officials to close beaches in the Mediterranean and Black Seas during the height of their summer tourist seasons. The same year a jellyfish expert from Barcelona's Institute of Marine Sciences warned that the potentially deadly box jellyfish (Carybdea marsupialis) had been seen in swarms off the Spanish Costas (Brava, Blanca and del Sol). In early August, in just half an hour, the Red Cross treated 50 people in Denia, Costa Brava for injuries from the mauve stinger jellyfish (Pelagia noctiluca), although this appears minor compared to the 4,000 people who needed treatment there on a single summer's day in 2008, following a major infestation.

For many people, one jellyfish might cause a mild sting and rash. But for others, the box jellyfish, mauve stinger and Portuguese man o'war (Physalia physalis) can cause excruciating pain, severe allergic reactions or even death for people with respiratory or cardiac problems. If one jellyfish can do this, think of the consequences for unsuspecting swimmers encountering dense swarms, dozens of kilometres long, with around 10 mauve stinger jellyfish per cubic metre of water (about the same as the space inside a large bin bag).

Why is this happening?

For decades scientists have been studying the causes and consequences of jellyfish blooms in ecosystems. They agree that jellyfish and fisheries-based ecosystems have a complex relationship and evidence suggests that these ecosystems can reach a tipping point, shifting rapidly from being fish-dominated to jellyfish-dominated.

In simple terms, jellyfish blooms are growing – and stresses caused by human activity such as overfishing are said to be the most likely cause. Fisheries-based ecosystems are frequently overfished, and taking too many fish out of  cosystems creates ecological space for jellyfish to thrive.

The arrival of jellyfish on beaches on any given day may be caused by several factors including currents, salinity or temperature. Some scientists and politicians blame climate change for jellyfish entering more northerly waters, or pollution  or jellyfish population explosions. While these factors may be connected, researchers have demonstrated that overfishing is a significant contributory factor in almost every major jellyfish bloom they studied.

In fact, some researchers say that overfishing gives jellyfish populations an exponential boost. Research has shown that overfishing is removing so many fish from some local ecosystems that it is making way for invasion by jellyfish.

The bottom line is that the more degraded a fishery ecosystem becomes, the more likely it is that jellyfish populations will benefit. 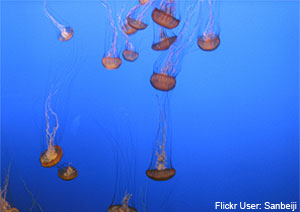 Where could this lead?

Systematically removing large predatory fish like tuna and cod, as well as overfishing crustaceans and molluscs, can lead to devastating changes. Gradually, large organisms, species diversity and structural diversity are replaced in ecosystems by more primitive species groups such as jellyfish.

The effect on the oceans – some examples

The collapse of small fish living closer to the surface, such as sardines or anchovies, can reduce predation pressure on jellyfish while increasing jellyfish food sources. In Namibian waters, sardine overfishing is believed to have caused the previously fish-rich ecosystem to become dominated by jellyfish. This shift in the ecosystem is then amplified as the sheer numbers of jellyfish outcompete the fish by preying on the same zooplankton species.

Large marine creatures such as turtles prey upon larger jellyfish, so an increase in jellyfish abundance may seem like good news for critically endangered species like the leatherback turtle. However, turtles are one of only a few predators of larger jellyfish but are themselves at risk from overfishing and so negates any corrective effect they might have on jellyfish numbers. To make matters worse jellyfish prey upon the eggs and larvae of fish species, directly impacting on fish populations.

Trawling and other methods impacting the seabed could create improved conditions for jellyfish: removing competitors and predators from the seafloor while simultaneously leaving rocky outcrops as jellyfish refuges may give the advantage to jellyfish over fish.

The cost to coastal industries

Estimates suggest that the severe jellyfish invasion of the Black Sea has cost tourism and fishing industries approximately €240 million since the 1990s.

Every year since 2000 Spanish officials on the Costas, concerned about the health and safety of millions of holiday-makers, have closed beaches because of jellyfish invasions. Over the decade swarms of mauve stingers invaded other popular Mediterranean tourist destinations from France to Greece.

Research suggests that on the French Riviera in 2004 as many as 45,000 people were treated for severe jellyfish stings12. With around two million tourists a year visiting the Costa Brava alone, regular beach closures cost local businesses and communities because beach-loving tourists are forced away from the shores to spend their holiday cash elsewhere. The cost to the public health system is incalculable.

Meanwhile, some coastal communities are spending vast sums to prevent jellyfish swarms reaching shallow water and beaches. Cannes and Monaco built floating barriers. Antibes uses a vacuum-boat to suck hundreds of jellyfish from the water at a time. Other communities use offshore nets and booms. Yet each of these costly solutions is aimed only at treating the symptom – jellyfish – not the cause.

Since 2000, Scottish and French salmon and trout farms have suffered losses of several million euro. Fishing nets become clogged with jellyfish and split, or fish quality may be significantly reduced – last year fishermen from San Sebastian, northern Spain collected more than 300 deadly Portuguese man o'war jellyfish from their nets in one day.

What can I do about it?

As we have seen, the longer-term concern is that in the battle for marine ecosystem supremacy, the current jellyfish conquests may be the result of systematic human-induced stress. This is leading to the destruction of highly evolved marine ecosystems and ultimately their reversion to a less evolved, more gelatinous state. This is called a phase shift. Some think it is not too late to prevent our fish seas from phase shifting to gelatinous seas. There is still time to avoid higher costs to communities dependent on tourism, fishing, fish farming and other industries.There is still time to prevent greater risks and costs to public health and safety.

You can help end overfishing by speaking up and taking action to achieve a far-reaching ecological vision of healthy oceans and sustainable fisheries. Visit ocean2012.eu, sign up for our action alerts, and join a member group near you, and help ensure we achieve fundamental reform of the EU's fisheries policy.

Reforming the EU's Common Fisheries Policy (the CFP) is a crucial opportunity to transform this nightmarish scenario into a secure, long-term sustainable future for marine ecosystems, fish stocks, and livelihoods for millions of Europeans.

OCEAN2012 is an alliance of organisations dedicated to transforming European Fisheries Policy to stop overfishing, end destructive fishing practices and deliver fair and equitable use of healthy fish stocks.

To learn more about the impacts of overfishing, read part two of this series, How Overfishing Impacts You: Fishy Traditions We Have Lost.