Most old fishermen talk about the big ones that got away. But old cod fishermen are different. They relive the decades when they pulled enormous loads of thick, white-fleshed bottom fish out of the Atlantic almost every day. 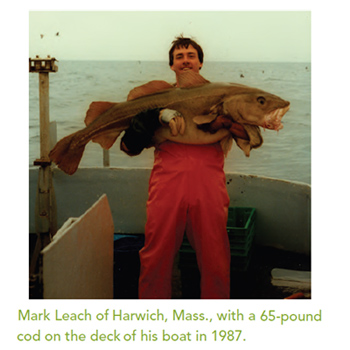 Former cod fisherman and historian Ted Ames of Stonington, Maine, says he heard about an old salt who "hauled in 25 tons in 20 minutes after steaming to a favorite fishing spot. ... He filled the net so full that it could not be brought on board without sinking the vessel. So he pulled the net behind him into port and then waited for the time to go out so he could get the fish."

"They were in the harbors—you could catch 'em in the harbors," says Mike Anderson, a retired fisherman from Chatham, Mass. "And when you steamed out to sea, the fleet stretched out to the horizon. Nobody asked why they called it 'Cape Cod' then."

Travel up New England's coast and you'll find lots of old salts who will tell similar tales: stories of cod schools that stretched up to 15 miles in the water, stories of the "million pounds a month" club formed by old-time trawler owners, stories of a fishery that had no limits and few rules. 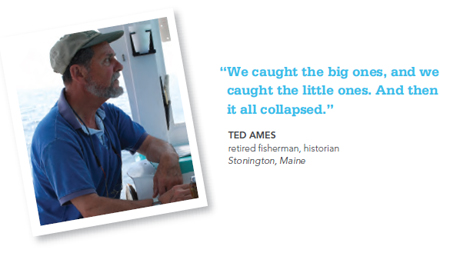 "We were the last cowboys," says Anderson, who started cod fishing in the late 1960s. "All you had to do was buy a boat and you were in. You could fish anywhere you wanted and catch as much as you could carry. And nobody tried to stop you. On the docks it was a madhouse, night and day."

Anderson and his contemporaries had no fish finders or GPS devices when they started out. Instead they had generations of local knowledge of the hot spots where the cod tended to gather. At the time, it was assumed that New England's cod were one gigantic population, which implied that if the hot spots were fished out, they would be refilled fairly quickly by cod from nearby waters.

"The fish were much, much bigger then," says Fred Bennett of Chatham, a friend of Anderson's. "Before the crash, I think we all assumed that it would be that way forever."

The "crash" that changed those notions started in the 1980s, when scientists began to notice that cod were getting smaller and less numerous. At the time, the fleets were getting bigger and more powerful, both near the coast and farther out at sea. Calls to rein in the fleets and learn more about the cod were ignored. That was because the price for cod kept rising as the population began diminishing and because New England's coastal towns were then fueled almost exclusively by fish and fishermen.

"We caught the big ones, and we caught the little ones. And then it collapsed," says Ames. By the early 1990s, official cod estimates were lower than they had ever been.

Later, after mapping out the fishing habits of a group of former cod fishermen in the Gulf of Maine, Ames helped uncover one of the prime causes of the catastrophic crash: that New England's cod did not belong to one big breeding population, but rather of many smaller populations that returned to the same areas each year to breed. He believes that cod will not recover fully unless these breeding grounds are protected. Outside of these areas, Ames says, it is essential to set strict fishing limits and enforce them.

"The most important thing we need to do is convince fishermen to ask themselves, 'What can we do to have more cod out there next year than we've got out there right now?' " says Ames, who was awarded a prestigious MacArther Fellowship for his research on cod. "I've been asked how many cod we could get in the long run if we move in this direction. I cannot begin to say."

Disputes over proper management of the cod fisheries are flaring now that some have shown signs of initial recovery. Some of the younger fishermen who have started catching cod again are pushing for permission to catch more. Many of them say they have never seen so many cod in the water.

But some fishermen think we can do better if we remember how plentiful cod were just 30 or 40 years ago, during the old salts' heyday.

One of them is Eric Hesse, a bottom-longline fisherman from West Barnstable, Mass., who talked recently while sorting through a load of cod and haddock he had just pulled out of Stellwagen Bank. Hesse says he is doing everything he can to keep the cod recovery going, partly because he has heard stories from the old salts about how things used to be.

"Things will get better," he says. "For the first time there is a hard limit on how many fish can be taken, which will have long-term benefits to the stocks. As fishermen operating within these new constraints, we have to invest in quality. By producing more marketable, sustainably caught fish, we can increase the value of our quotas and the fishery as a whole."

Since May 2010, New England's groundfish fishery is being managed with science-based annual catch limits. Such limits will bring an end to overfishing and promote rebuilding of depleted stocks. This bodes well for the future of fish and fishermen along our coasts.

As one old salt, Bennett, says: "We can do it. It can be done. I know it can be done. If we can send somebody to the moon, we sure as hell can fix this fishery."