Populations of alewife and blueback herring are in serious decline along the Atlantic Coast and face numerous threats. These river herring play an important ecological role in rivers and coastal waters, providing a crucial source of food to wildlife. By restoring river herring runs, we can protect an entire ecosystem.

Restoration efforts protect essential habitat, remove dams and add fish ladders. An excellent example of the benefits of habitat restoration is the Connecticut River, where runs had dwindled to about 200 fish in the 1970s, and then recovered. Half a million blueback herring were counted in 1986. But something apparently defeated this dramatic recovery. By 2008, the run had plummeted, to only 84 fish. More help is needed.

River herring have fallen through the cracks of fisheries management. Agencies continue to pass responsibility for river herring like a hot potato.

LIFE CYCLE: River herring spend the beginning of their lives in ponds, rivers and coastal waters, all managed by individual states. As juveniles, they move offshore to ocean waters managed by the federal government, where they school with other small fish, such as Atlantic herring and mackeral. Once mature, river herring retrace their route across jurisdictions to spawn in their home rivers. 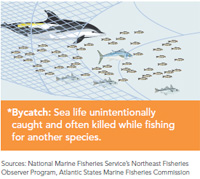 Evidence shows that river herring bycatch* is significant. Particularly troubling is the number of these fish caught by midwater trawlers, which began fishing in the New England in the mid-'90s. These industrial-scale vessels hauling small-mesh nets as big as a football field can catch everything in their path. Trawlers often fish in pairs, dragging a net between them. 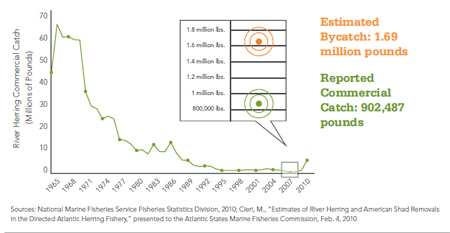 No one disputes that river herring are bycatch of the Atlantic herring fishery in federal waters. Data show that this fleet catches enormous numbers of river herring in single-net tows. In fact, one tow has the potential to wipe out an entire river's population of river herring. 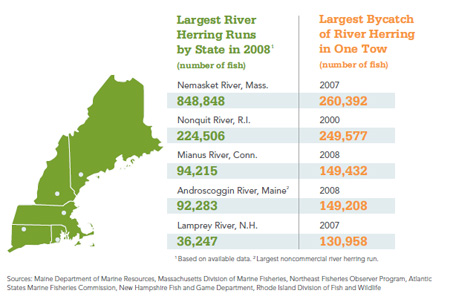 The New England Fishery Management Council is currently working on a revision to the management plan for the Atlantic herring fishery, called Amendment 5. These should be the top priorities regarding river herring:

2. Accountability
Establish bycatch limits on river herring and measures to ensure the limits are not exceeded.

3. Protection
Use real-time data to close specific areas to fishing during critical times of the year to minimize river herring bycatch in known hot spots and reduce the total catch of river herring.

Learn more about these important fish by viewing our photo essay, A Sign of Spring: Welcome Home, River Herring.