Known as the American Mediterranean, the Gulf of Mexico is an economic and environmental treasure. Within its 600,000 square miles lie natural wonders and habitats ranging from an underwater Grand Canyon 12,000 feet deep to coral reefs and one of the largest contiguous seagrass beds in the Northern Hemisphere. 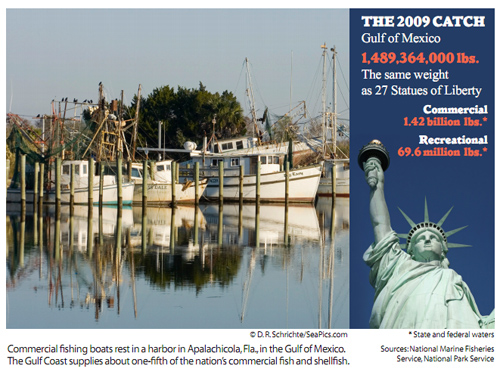 The extent of damage caused by the 2010 oil spill remains unknown. But the disaster lends urgency to protecting the Gulf's resources, including its diverse bounty of fish.

For years, overfishing has been taking a toll on the world's ninth-largest body of water, and several fish species are at critically low levels. Depleting fish too fast risks unbalancing the ecosystem and harming and economic engine that supports millions of people and jobs.

For decades, red snapper have been fished at unsustainable rates. Too many adult fish were caught, and young fish were frequently snared by accident in shrimp trawls. In 2007, fishery managers dramatically reduced the impact of trawling on red snapper and finally set strict scientific limits on catch.

A 2009 report showed the measures are working. Red snapper are more plentiful, bigger and spreading over a wider area. As a result, managers raised allowable catch for 2010—from 5 million to 6.9 million pounds—and future increases are likely if recovery continues.

But ensuring fishermen stay within allowable fishing levels is a major challenge. From 2007 to 2009, recreational anglers have hauled in more than a million pounds beyond what was allowed annually, despite general compliance with seasonal closures, bag limits and trip limits. The excess is probably due to the growing number of anglers and more fishing. In 1990, anglers took more than 13 million trips in Florida, Alabama, Mississippi and Louisiana; in 2009, they took 22 million, according to the National Marine Fisheries Service. Even though red snapper may be more plentiful and larger, managers had to shorten the recreational fishing season to get better control and adjust for the excess take in previous years.

The dilemma exists partly because managers set the fishing limit at the precise amount that is safe for the population—a method that doesn't leave any room for error. The theoretically safe quota can easily be exceeded because of difficulties in controlling how many fish are actually caught. A wiser strategy would be more cautious limits or more effective control of the numbers of fish caught. Managers also are exploring ideas for a new saltwater angler registry, more timely data collection and analysis, and tag or stamp programs that permit fishing for certain species, such as red snapper.

The Gulf of Mexico Fishery Management Council is working on federally mandated plans to end overfishing—catching fish faster than they can reproduce.

Three Gulf species—gag grouper, greater amberjack and gray triggerfish—have critically low population levels and unsustainably high fishing rates. Red snapper fishing rates have stabilized for the first time in decades, but the population is smaller than the target set by managers to ensure its sustainability.

The Gulf council is revising management plans for species undergoing overfishing and is considering rules to prevent overfishing for about 50 more species ranging from cobia to all other groupers and snappers. The U.S. secretary of commerce must give final approval to council actions. The 17-member appointed council managers fisheries in Gulf federal waters up to 200 miles off the coasts of Florida, Alabama, Mississippi, Louisiana and Texas. The council is composed of recreational fishermen, state fishery managers and other experts. It meets five times a year in public sessions throughout the Gulf region.

How You Can Help

Pew is leading efforts to work with the Gulf of Mexico Fishery Management Council and the National Marine Fisheries Service to establish science-based annual catch limits to end and prevent overfishing.

The campaign works to bring scientific expertise to bear on fishery management plans and seeks common ground with fishermen to find solutions that balance human and environmental needs and raise awareness about overfishing and potential remedies.