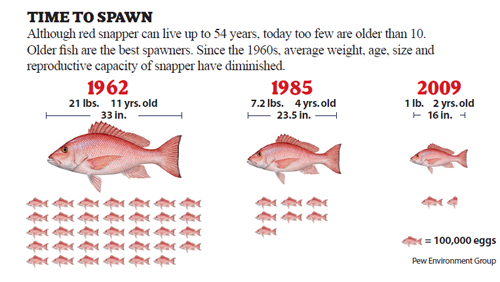 Red snapper are in critical condition.

After almost half a century of severe overfishing, their  population has plummeted to dangerously low levels.

Today, there is finally a plan to save them.

New rules halt red snapper fishing in the Atlantic Ocean from North Carolina to Florida to give the fish a needed break. If red snapper have a chance to grow older and reach their best breeding years, this popular catch and restaurant favorite could rebound. The moratorium could be  lifted gradually as the fish show signs of recovery.

The red snapper rebuilding plan marks one of the most dramatic actions ever taken in the Southeast to end overfishing and restore a  species. It is a result of the nation's renewed commitment under the federal Magnuson-Stevens Fishery Conservation and Management Act to protect fish populations for the sake of the ocean ecosystem, fishing industry and the public.

Today's sacrifice by a few could mean bountiful red snapper for everyone in the long run. Robust fish populations are critical for a  healthy ocean ecosystem that powers the economy and defines our way of life. Red snapper have played an important part in southern culture—from family fishing trips to tourist vacations and relaxing seaside restaurant meals.

Saving red snapper is the right thing to do for our ocean, the public and our future. 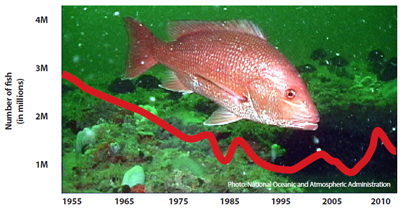 Unsustainable fishing rates during the last half a century have taken their toll on red snapper. However, the population has surprisingly increased in the last few years. That's because red snapper occasionally and unpredictably produce vast numbers of offspring. But they can go years without a major population boost. Bag and size limit restrictions begun in 1992 did not appear to have the intended effect and were not enough to help the species rebound from such depleted levels.

Fishermen and scientific research confirm that there are more red snapper today than in the recent past. But the rise is due to a short-lived burst in reproduction, and it doesn't mean the population is healthy. From 1998 to 2000, the fish multiplied rapidly due to unknown environmental factors. Now those young have grown. But if killed at recent fishing rates, the fish would not breed enough to boost future generations.

The Compromise to Save Them 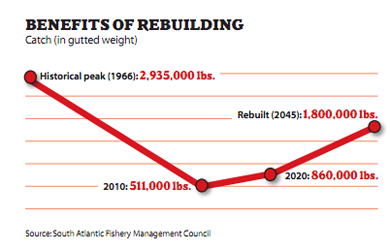 A moratorium on red snapper fishing in federal waters from North Carolina to Florida will give red snapper a needed break and allow the fish to grow older and reach their best spawning years. Plans were eliminated for a closed ocean area to protect places where red snapper are most often caught accidentally when fishermen target other species. Too few red snapper survive catch and release.

Under the recovery plan, red snapper may boom, providing more robust fishing than in recent times. Although total recovery could take up to 35 years, red snapper fishing could resume much earlier as the species shows signs of recovery.

Fallout and the Future

The red snapper recovery requires sacrifice from some fishermen, but the popular catch isn't the only fish in the sea. Red snapper represent just a small percentage of Southeast catch.

Fishery scientists are using new techniques to collect more red snapper information for the next study, which is expected in five years. Scientists at the National Oceanic and Atmospheric Administration are using video cameras and working with commercial longline fishermen to sample fish at different depths to determine whether old, big fish—the best breeders—move to deep water, where they are less vulnerable to fishing gear. The new information will help determine changes to the red snapper recovery plan.