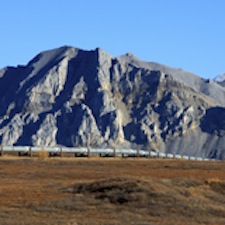 This HIA, conducted in 2007, examined the effects of further expansion of oil and gas development on the health and welfare of the primarily Inupiat residents of the region, particularly on hunting and fishing, which are central to their diet and way of life. This was the first HIA to be formally undertaken within the legal framework of the U.S. National Environmental Policy Act, which established the Environmental Impact Statement (EIS) process and formed the foundation of environmental regulation in the United States.

The HIA drew connections between predicted impacts on fish and wildlife and the consequences for diet and health in the local population. It also recognized the potential social changes that are sometimes associated with new roads and the influence an influx of non-resident workers can have on problems such as drug and alcohol use. However the, HIA also acknowledged the central importance of oil and gas revenue to services and infrastructure that support health, such as police, fire, emergency and public health services, as well as to infrastructure such as water and sanitation programs and road maintenance.

The local government participated formally in the EIS for the project and led the HIA as part of its contribution to the EIS. Although local residents generally support oil and gas development because of the revenues it brings, the community and the Bureau of Land Management (BLM) had been sharply divided over parts of the proposal that would expand leasing into areas that hold special cultural and practical importance for the communities. Collaboration on the HIA contributed to a compromise leasing plan that was widely accepted by the communities as well as the BLM. The HIA also led to new requirements for air quality analysis and monitoring of any oil-related contaminants in subsistence foods, and to a new requirement for worker education on drugs, alcohol and sexually transmitted diseases.