North Atlantic right whales are caught in a dramatic downward spiral that began in 2010, having lost more than 100 animals from a population of only around 500. Even with recent births, scientists put the number of whales at only about 350 at the end of 2019, the most recent year for which an estimate is available. The primary cause of death? Entanglement in fishing gear—specifically, the lines that descend vertically in the water, attaching lobster pots on the seafloor to buoys on the surface.

With the federal government working on new regulations—a draft of which was made public by the National Oceanic and Atmospheric Administration’s Fisheries Service (NOAA Fisheries) on Dec. 31—to protect the whales from these entanglements, an overwhelming majority of residents along the East Coast support strong, effective protections for the species, according to a poll released today by The Pew Charitable Trusts.

Almost 9 in 10 of those polled—88%—said it’s important that the federal government protect right whales, and more than half—53%—said it’s very important. And three-quarters of respondents who said they favor regulations that prioritize economic growth over the protection of endangered species also said they believed it was important that the government effectively protect right whales.

Respondents supported a wide range of solutions that could protect right whales.

Those polled expressed a strong preference for the federal government to use money appropriated by Congress to at least partially fund less harmful fishing gear, such as ropeless fishing systems, rather than requiring fishermen to pay for it alone. And 84% of those who eat lobster said they would be willing to pay more if new fishing gear—or regulations—to decrease the risk of right whale entanglement increased the price of lobster.

Majority support for protecting right whales crosses the political spectrum and was measured in every East Coast state from Maine to Florida, as well as Washington, DC. The phone surveys reached 1,847 adults, a group that is representative across geography, age, gender, education level, and political party (see methodology).

NOAA Fisheries, which is responsible for federal fishing regulations, should take careful note of the findings, which may represent a deeper and more accurate measurement of public views than the feedback the agency normally hears, including comments voluntarily submitted during the period that began Dec 31 and ended March 1.

The survey results indicate that the public wants more effective solutions than those included in the regulations that NOAA Fisheries proposed Dec. 31, and they give weight to Pew’s recommendation that NOAA Fisheries withdraw the proposed regulations and, while developing a new version, immediately close certain high-risk areas to fishing gear with ropes when right whales are likely to be present. Doing so would be the best chance to reverse the downward trajectory of right whales —and prevent their extinction.

Katharine Deuel is a senior officer with Pew’s project to protect Atlantic Ocean marine life off the U.S. and Canada. 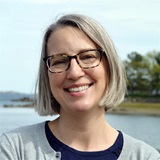