How a Coast Guard Career Led to the Illegal Fishing Fight

In the effort to end illegal fishing and other crimes on the sea, enforcement plays a vital role. Daniel Schaeffer, a senior manager working on international fisheries for The Pew Charitable Trusts, strives for effective enforcement of laws intended to end and prevent illegal, unreported, and unregulated fishing. In this Q&A, Schaeffer explains how his 27-year journey with the Coast Guard ignited a passion for fisheries and curbing maritime crimes. The interview has been edited for clarity and length.

Q: What inspired your service in the Coast Guard?

A: I grew up in a military family with a history of service stretching back five successive generations. I had always planned to follow that tradition, but the question was always which branch. By happenstance, I met a family friend that spun stories of his time in the Coast Guard going out on search-and-rescue missions, pulling people from the water, and connecting with the sea. He went on to talk about the Coast Guard’s humanitarian focus, and how the other services practiced for what they hoped they would never have to do while the Coast Guard was out there serving the nation every day. I thought to myself, that is what I wanted to do! So, in the summer of 1988, off I went to the training center in Cape May, New Jersey, to start what would become a 27-year journey.

Q: Why were you drawn to fisheries in particular?

A: The funny thing about the Coast Guard is I never knew exactly what I would be doing on any given patrol on any given day. I remember my first boarding of a fishing vessel off the coast of Oregon. It was a Polish factory trawler, and I was part of the team enforcing the agreement on foreign fishing vessels participating in a joint venture targeting hake. I still vividly recall the ride over to the trawler in a small boat in the choppy sea, with the wind and salty spray in my face. We pulled up next to this huge ship, and, wearing a bulky dry suit and slippery rubber gloves, I had to half climb and half swing from a wood and rope ladder, not sure if I would make it to the top, before finally hopping over the gunwale onto the deck. After hours of crawling around the hold and deck of that boat, I returned covered in fish slime and blood and grinning from ear to ear—I was hooked.

Q: After you retired, what led you to focus on the fight against illegal, unreported, and unregulated fishing?

A: I carved out a career in the Coast Guard focused on fisheries. It was not a standard career path, and for each assignment I took, I was warned it could be career ending to stay in this field, as no one else had ever done so. But at each new position and promotion, I was able to advance the fight against illegal fishing domestically and internationally. Fisheries enforcement had become my passion, and I was determined to make a difference. Back in 2011, I was fortunate enough to work with Pew on the genesis of the ending illegal fishing project. It complemented my work in the Coast Guard and offered an opportunity to continue my drive to end illegal fishing. Five years ago, I decided to leave the Coast Guard and join Pew’s efforts full time.

Q: What is the most memorable moment of your career, and how does it inspire you to this day?

A: Throughout my time in the Coast Guard, I was fortunate to travel to many places and experience a wide spectrum of people and events, but one experience on a remote beach in Sierra Leone in 2006 continues to motivate my drive to address illegal fishing. I was part of a U.S. delegation reviewing the legality and procedural issues in the prosecution of a foreign fishing trawler. I took a side trip with local staff to a remote fishing village, and what I saw and heard there broke my heart. I sat with a group of mothers who had recently lost their sons to the sea. Their pirogue had capsized on an attempt to reach the Canary Islands as a way to get to Europe and a job after foreign trawlers had decimated the local fish population in their village, and these fishermen no longer could make a living. The grief of the mothers was still raw, and despite their stoicism, their eyes showed their pain. As I sat there talking and drinking tea with them, I could see over their shoulders, no more than a mile or so off the beach, two foreign trawlers. One was at the center of the case we were investigating. I often get caught up in the policy, enforcement, and conservation efforts we all do, but this experience, and many like it, bring it back to the reason I do what I do: the human impacts, and the ability to make a difference.

Q: What's one experience you had in the Coast Guard—in training or operations—that you hope to never go through again?

A: Ironically, exhilarating experiences often are ones you are glad to have gone through but would never want to experience again. For me, one of these was riding out typhoon Dale in the Bering Sea on a 70-year-old Coast Guard cutter. Picture a never-ending roller coaster ride in waves towering above the bridge of the ship, several hundred miles out from land—knocking about, rolling side to side 40 degrees, and pitching up the face of a wave, then sliding down its backside, all on a ship built in World War II. The barometric pressure dropped from 1039 to 952 in 24 hours, and wind whipped by so fast our weather gauges were torn off after the last reading of 190 mph, and sea water hitting the windows of the bridge. It went on like this for nearly 24 hours, a phenomenal spectacle of the power of water and nature, but not one I would voluntarily go through again.

Q: How does your service in a branch of the armed forces translate into working for an international nonprofit organization that does conservation work, among other things?

A: While it may seem an odd pairing, as with all successful efforts, a cross-disciplinary approach brings alternative perspectives and better results. The last 10 years of my Coast Guard time,  I was engaged in work on many international efforts, including different regional fisheries management organizations, the Arctic fisheries treaty negotiations, development of the Port State Measures Agreement, and enforcement and capacity building in developing coastal nations—many of the same issues Pew continues to work on. I can be a connection between these worlds of work and a community that is often skeptical of environmental conservation organizations, as happened recently on an engagement in Africa. When sitting across the table from a group of naval officers in Mozambique, I was introduced as being from Pew, which was met with deadpan looks. But when I explained that I was a retired Coast Guard officer, faces lit up and they immediately engaged. This has been repeated multiple times and led to Pew having access to help shape maritime security priorities, including fisheries enforcement.

Q: How do you hope your work changes fisheries management over the next 10 years?

A: I want to see the inclusion of fisheries as a primary aspect of national security to achieve global maritime governance. The challenge is that changing the national security narrative is a long and arduous process akin to changing the course of a river. I’ve been working toward this goal for over a decade. It takes sustained pressure over time, but we’re beginning to see a change, with the midlevel officers and leaders we’ve been persistently engaging and messaging now arriving in positions of authority. The importance of fisheries to national security is coming into focus. With continued education, engagement, and execution, we as a world will achieve collective maritime governance, with fisheries leading the way.

So my goal over the next 10 years is to save the world, one fish at a time. 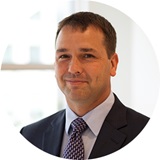