Although Silicon Valley is often considered the birthplace of modern entrepreneurial leadership and ideas, scientists across the country are getting attention for groundbreaking work. Investment in health research and development grew 27 percent from 2013 to 2017, for example, and several members of the Pew biomedical research community have been at the forefront of this shift.

From efforts to develop a unisex contraceptive to advances that could help combat cancer, several have received funding from venture capitalists in recent years to develop new technologies and therapies to address some of the greatest challenges in health and medicine.

Polina Lishko, a 2015 Pew biomedical scholar and an associate professor at the University of California, Berkeley, initially sought to create better birth control for women. Instead, her team has conducted research on sperm motility that may lead to a contraceptive available to both sexes.

With the help of Silicon Valley tech hub Y Combinator, Lishko co-founded YourChoice Therapeutics in March 2019 and is developing a hormone-free alternative to traditional contraceptives on the market today. After identifying two novel proteins on sperm cells that are required for fertilization, Lishko’s team discovered methods to block these targets, deactivate sperm movement, and prevent sperm cells from breaking through an egg’s protective barrier. The product is likely several years away from reaching the consumer market, but it has the potential to democratize contraception and improve family planning options worldwide.

Cigall Kadoch, a 2015 Pew-Stewart scholar and an assistant professor at the Dana-Farber Cancer Institute in Boston, wants to know how cells turn certain genes on or off, especially those that cause cancer. When studying chromatin—a DNA structure that protects and controls how a cell uses genetic information—Kadoch found that chromatin remodeling complexes play an important part in regulating this process. However, mutations in these complexes cause errors in gene expression that can lead to the development of multiple cancers and degenerative brain diseases.

Kadoch took these findings to venture firm Flagship Pioneering in nearby Cambridge and launched Foghorn Therapeutics in March 2018. Her team received $50 million in seed funding to develop experimental medicines to change how genes are turned on and off. Likening its work to “gene traffic control,” Foghorn Therapeutics is applying Kadoch’s research on chromatin biology to target diseases such as synovial sarcoma, prostate cancer, and non-small cell lung cancer.

With an estimated 1.7 million new cancer cases diagnosed in the United States in 2019 alone, scientists and investors alike want to invest in novel ideas that can spark advancements for screening and treating cancer.

Agnel Sfeir, a 2014 Pew-Stewart scholar, 2019 Innovation Fund Investigator, and an associate professor at New York University’s Skirball Institute, is harnessing the power of the gene-editing technology CRISPR to identify new cancer targets for precision oncology—a treatment approach tailored to an individual’s form of cancer. Cancer cells are savvy and can thrive despite damage to their DNA. Still, they cannot tolerate certain DNA defects, giving rise to unique opportunities for drug development.

To explore the possibilities, Sfeir and fellow researchers founded Repare Therapeutics, which combines their trademarked screening platform, called SNIPRx, with biochemistry and computational modeling to identify genetic vulnerabilities and develop drugs that are lethal to cancerous tumors. As a vote of confidence in its early findings, Repare Therapeutics received $82.5 million from investors in September 2019 to continue screening for cancer targets, with hopes to move into clinical trials by late 2020.

At the same time, Roberto Zoncu, a 2014 Pew-Stewart scholar and an assistant professor at the University of California, Berkeley, is working to discover new drugs to combat cancer-causing proteins—even those considered “undruggable.” With a $67 million investment in June 2019 from several venture funders, Zoncu co-founded Frontier Medicines to research new therapies, starting with cancer. Knowing that drugs are only effective once they bind to a protein, Zoncu and his team use machine learning and an approach called chemoproteomics to identify new sites for that binding to take place.

His team discovered that the dynamic movement of proteins in cells creates temporary binding pockets, or “hot-spots” that can be targeted with small-molecule drugs. With their work in the pre-clinical stage, Zoncu and his partners are preparing their lead drugs for clinical trials and  hope to eventually target up to 90 percent of the cancer-causing proteins that drive human disease.

Meanwhile, Nickolas Papadopoulos, a member of the Pew-Stewart national advisory committee and a professor at John Hopkins Medicine in Baltimore, wants to stop cancer in its tracks. With a $110 million investment from multiple partners, Papadopoulos co-founded Thrive Earlier Detection Corporation in 2019 to pioneer CancerSEEK, a blood test that incorporates early cancer detection into everyday medical care.

This diagnostic tool will evaluate circulating tumor DNA in the bloodstream, looking at specific gene mutations and protein markers, and detect abnormalities associated with eight common cancers. Early results have shown that CancerSEEK performs with more than 99 percent specificity—that is, correctly identifying patients without cancer—and with 69 to 98 percent sensitivity in accurately spotting the presence of five different cancer types.

These efforts are prime examples of the creativity, determination, and savvy of today’s researchers-turned-entrepreneurs, who serve as role models for how to take discoveries to the next level. By transforming their research into accessible products, Pew-supported scientists hope to revolutionize health care and save countless lives. 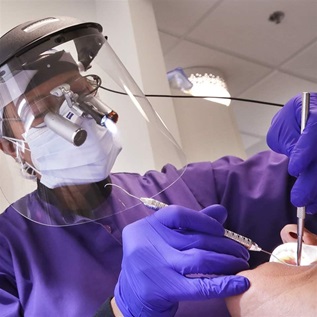 June 25, 2020 Dental Therapists in Minnesota Adjust Their Work in Response to COVID-19