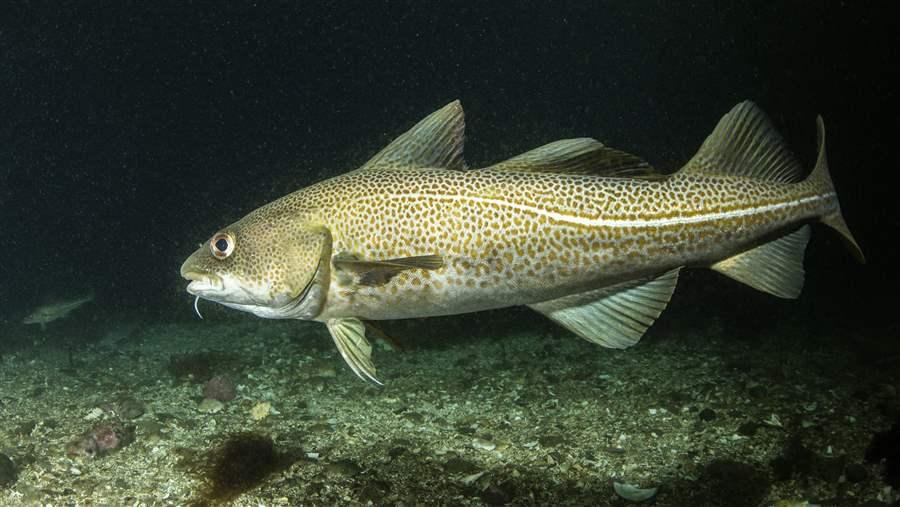 Species like Atlantic Cod (Gadus morhua) could lose more than 90 percent of their habitat this century as waters warm.

Many of North America’s fish, shellfish, and other marine life will be heading north in the coming decades due to warming waters, according to one of the first studies to predict shifts in suitable habitat for hundreds of species across their ranges.

In the research, Malin Pinsky and James Morley of Rutgers, the state university of New Jersey, and their co-authors predict how climate change would affect the distribution of 686 marine animals—mainly fish—by 2100 for most of the continental shelf of North America. The study, published May 16, 2018 in the journal PLOS ONE and funded in part by The Pew Charitable Trusts, provides the most comprehensive projections of these shifts and should help fisheries managers and the fishing industry in their planning.

The researchers considered two scenarios: one in which global greenhouse gas emissions continue at their current pace (the high-emissions scenario) and the other in which emissions are reduced in line with the Paris climate agreement (the low-emissions scenario). Water temperature is a major factor in where marine species live, and small variations can have big impacts. The stark changes forecast in this study are based on average ocean temperatures rising about 2 to 3 degrees Celsius (3.6 to 5.4 degrees Fahrenheit). 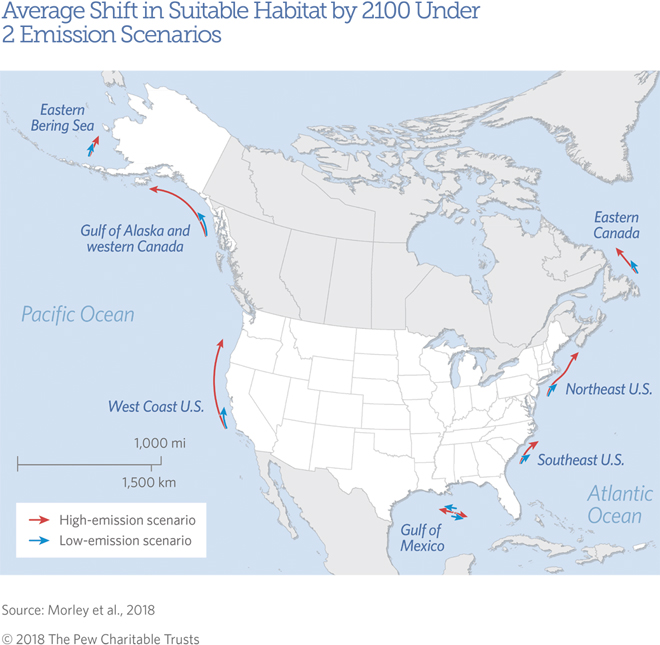 Shifts in suitable habitat for North American marine species, by region. Arrows indicate the average distance that the center of species’ suitable habitat shifted, not the actual locations.

Under high greenhouse gas emissions, many species are forecast to move several hundred miles by the end of this century, and some are predicted to have little remaining habitat in the United States. For example, the researchers forecast that Atlantic cod (Gadus morhua) would lose 90 percent of its suitable habitat in the U.S. and move to cooler waters off Canada.

Some of the most productive fisheries in the world are in North American waters, where among the fastest increases in ocean temperatures are occurring. Large-scale relocation of species would force fishery managers to adjust many policies, including what groups of fishermen have access to each stock.

The authors predicted the largest average moves for the West Coast of the U.S. and Canada, including the Gulf of Alaska, with some species expected to shift more than 1,000 miles under the high-emissions scenario. In these regions, water temperatures are fairly similar, so marine species would have to travel farther to find cooler waters. Additionally, the wide continental shelf near Alaska provides a large habitat for many species.

“These shifts could lead to conflicts over regional allocations of fisheries quota, displaced fishermen, and changes in stock boundaries,” Morley said. “As the availability of species shifts, coordination among regional management groups will become increasingly important.”

Predicting the impacts of climate change

To make their predictions, the researchers gathered data on the presence and amount of marine species from 136,044 bottom trawl hauls taken from 20 surveys encompassing most of the continental shelf around the U.S. and Canada. They also considered other data, including the temperature range and depth at which each species lives and the bottom type (mud, sand, etc.) of those habitats.

The researchers projected the center of each species’ geographic range and calculated how far that center would move every 20 years through the end of the century. They also projected how each species’ range would expand or shrink. To test the reliability of these predictions, they compared 16 forecasts of where and how quickly ocean temperatures might change.

Climate change will drive a large majority of the species studied northward, the researchers concluded. Under high greenhouse gas emissions, most of those relocations would be twice as far as under low emissions, and in some cases three times as far. Eleven species, including some rockfish, would see the center of their suitable habitat move more than 1,000 miles, and 111 species would see theirs shift more than 500 miles.

The smallest average moves are forecast in the Gulf of Mexico—around 30 miles under high emissions and 3 miles under low emissions—partly because temperatures are fairly uniform throughout the Gulf and species there can’t go very far north without reaching land. The researchers found that some species in this region would move to deeper areas, some would experience an overall decline in their suitable habitat, and some tropical species would expand their range.

Off the U.S. West Coast, the species studied would shift more than 700 miles, on average, under high emissions and nearly 125 miles under low emissions. For example, Pacific whiting (Merluccius productus), now centered along the Gulf of Alaska and western Canada, is forecast to move 730 miles north under continuing high emissions and 130 miles if emissions were reduced. In the southeastern U.S., suitable habitat for sheepshead (Archosargus probatocephalus) is projected to shift more than 200 miles under high emissions but only a 10th of that distance under the low scenario.

Warming waters could expand habitat for some marine life

The authors concluded that warming would expand many species’ habitats. These increases would occur most dramatically in the waters off the U.S. West Coast, where species would see the area of suitable habitat more than double, on average, under high emissions because of the large continental shelf area in the Gulf of Alaska and eastern Bering Sea.

The ranges of some tropical species are also projected to expand. Gray snapper (Lutjanus griseus) is primarily found west of Florida but by 2100 could be found throughout the Gulf of Mexico and the southeastern U.S. For some species, the modeling showed the opposite effect: Habitat for sheepshead, for example, is forecast to drop by 83 percent in the Gulf and by 46 percent along the U.S. East Coast.

The study did not account for factors such as changes in reproduction and food availability that would also affect when and where species relocate and the success of those moves. Still, the detail and breadth of this research should help fishery managers and the fishing industry prepare for unsteady times.