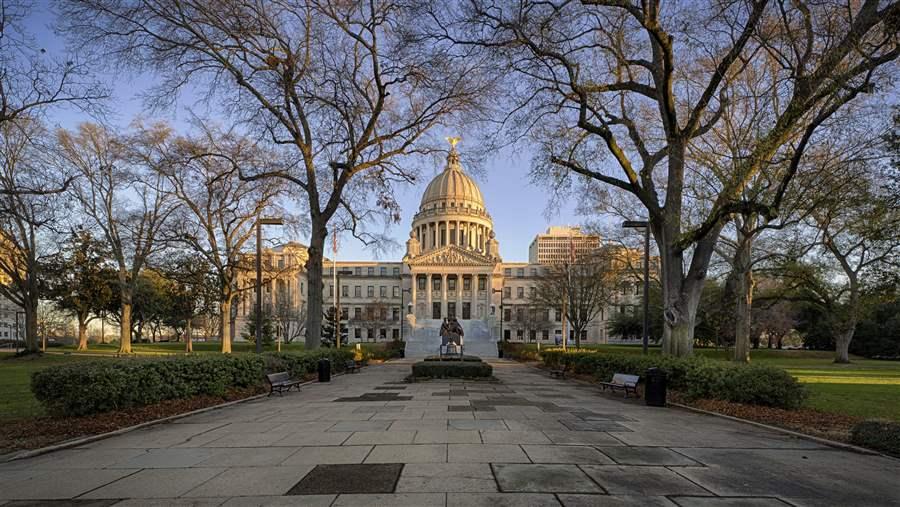 Mississippi is bolstering its successful 2014 criminal justice reforms by enacting a new law that will retroactively expand parole eligibility for certain nonviolent offenders, promote successful re-entry into their communities for those who were incarcerated, and ensure that people are not locked up because they are too poor to pay fines.

The House and Senate passed H.B. 387 unanimously and Governor Phil Bryant (R) signed it into law March 26. Policymakers developed the legislation with support from The Pew Charitable Trusts. The measure had backing from a diverse group of state and national stakeholders, including the American Civil Liberties Union, the American Conservative Union Foundation, Americans for Prosperity, Clergy for Prison Reform, FWD.us, the Mississippi Center for Public Policy, Right on Crime, and the Southern Poverty Law Center.

The new law builds on the significant policy changes made by Mississippi four years ago. Leaders first began scrutinizing state correctional practices in 2013, when Mississippi had one of the nation’s fastest-growing prison populations. Seeking to improve public safety outcomes, prioritize the use of prison for people committing serious offenses, strengthen supervision, and reduce recidivism, officials launched a thorough, data-driven examination of state policies and practices as part of the Justice Reinvestment Initiative, a partnership among Pew, the U.S. Department of Justice, and other organizations.

That initial study led to H.B. 585, which restructured sentences for drug and property offenses, including reducing automatic penalty enhancements for nonviolent crimes.

The state made significant strides toward its goals over the next three years, according to a review of Department of Corrections data conducted by Pew and the Crime and Justice Institute. The analysis found that between 2014 and 2017:

The state’s overall crime rate, meanwhile, declined 5 percent between 2014 and 2016, according to the most recent FBI Uniform Crime Reporting data.

Despite these advances, Mississippi still had the nation’s third-highest imprisonment rate at the beginning of 2017. And some numbers were headed in the wrong direction. For example, although the state had reduced the number of people returning to prison for violating conditions of their supervision—such as missing appointments with their probation officers or failing drug tests—that number had begun to climb again and was approaching pre-reform levels.

Proponents of the recently enacted law recognized that Mississippi could take additional steps to further reduce its prison population while protecting public safety. To that end, H.B. 387:

State criminal justice systems are vast and complex. There is no single piece of legislation, no matter how comprehensive, that can make all necessary fixes or guarantee long-term success. By monitoring progress after the 2014 reforms, Mississippi policymakers managed to identify additional ways to safely reduce the state’s prison population further and were able to muster broad bipartisan support for the legislation. By doing so, the state took another step toward building a criminal justice system that produces more justice and public safety.