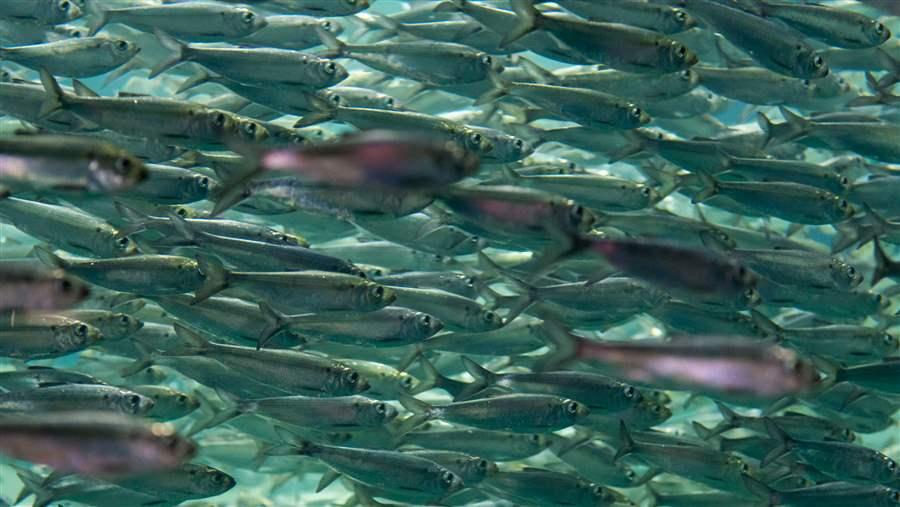 Based on a model of herring (pictured) and cod, researchers found that ecosystem-based fisheries management can help avoid catastrophic economic losses.

For decades, many scientists have recommended that fisheries managers consider ecosystem factors—such as how predators interact with prey—when setting catch limits and other policies and guidance. Those scientists often cite sustainability as a key benefit of this approach, known as ecosystem-based fisheries management, or EBFM. Now, a study published in the journal Proceedings of the National Academy of Sciences (PNAS) shows that this approach can also help protect the economic value of some fisheries.

Historically, most U.S. fishery managers have developed policies that focus on the health and numbers of one species at a time, a method known as “single-species management.” This approach, however, may lead to problems. For example, if managers do not account for factors such as predators, habitat, or water temperature, they might incorrectly estimate the level of catch a species can sustain. Recognizing this shortcoming, many U.S. fishery management councils have started to account for these issues. For example, some councils have recently adjusted catch limits for critical prey species, or forage fish, to help support predator species.

In the PNAS study, led by Timothy E. Essington, a professor at the University of Washington’s School of Aquatic and Fishery Sciences and a 2011 Pew marine fellow, researchers sought to discern whether EBFM also generates specific economic benefits. The research team, which included ecologists and an economist, created a simple model that represented two interacting fisheries, one for cod and one for herring. They used the model to look at the likely economic outcomes of 16 scenarios. For each scenario, cod and herring began at either high or low abundance, and the relationship between the two species was set to one of four levels of complexity.

The study found that an ecosystem approach can help to avoid catastrophic losses in fisheries in some situations. For example, a scenario in which cod abundance was initially low and managers failed to account for the correct predator-prey interaction led to substantial economic loss in the cod fishery, which declined by as much as 300 percent, going from a profit to a loss.

In another key finding that should come as a relief to fisheries managers, the researchers acknowledged that managers needn’t fully understand every ecosystem interaction before making a decision. That’s because in the majority of scenarios, factoring in the ecosystem information resulted in minimal economic difference.

Instead, the authors recommend that managers strive to use ecosystem information to identify “safe zones”—where the risk of a fishery collapse is small—and to avoid “danger zones” in which the economic consequences of a wrong decision are high.

“Safe zones would help maintain resilience in a system by using techniques that are simple, easily understood, and achieve satisfactory outcomes, and that acknowledge upfront the difficulties of prediction in the face of ecological complexity,” says Essington.