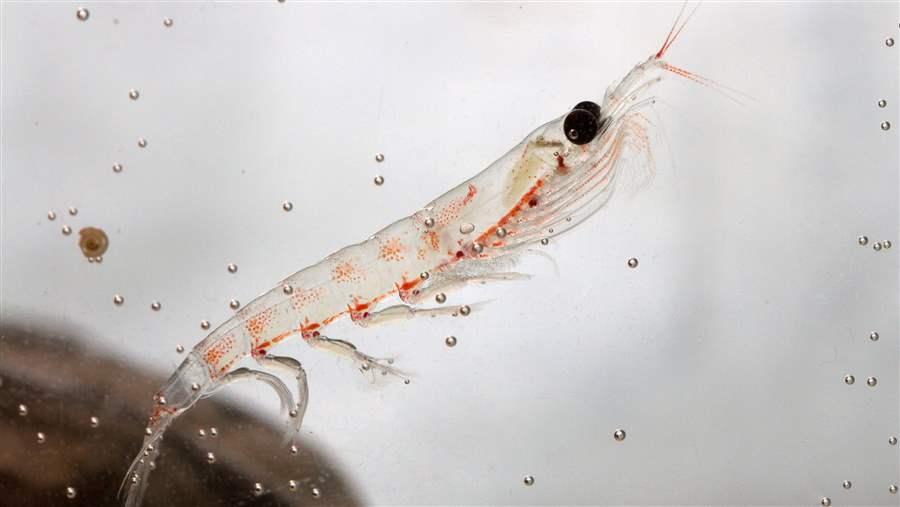 Climate change could lower krill growth rates, resulting in less total weight, or biomass, of krill and reducing the populations of predators that depend on them for food.

According to a new study published Jan. 31 in the journal PLOS ONE, climate change could reduce krill total weight, or biomass, and the abundance of their predators in some areas of Antarctica’s Scotia Sea and off the Antarctic Peninsula.

The research team—led by Emily S. Klein, a postdoctoral research fellow with the Southwest Fisheries Science Center’s Antarctic Ecosystem Research Division and the Farallon Institute for Advanced Ecosystem Research—looked at the effects of rising ocean temperatures on Antarctic krill (Euphausia superba), a keystone species in the Southern Ocean. They found that climate change could reduce krill growth rates, resulting in a smaller biomass of krill.

They then looked at how this reduced biomass might affect predators—the penguins, seals, whales, and fish that feed primarily on krill—and found that penguins were the most sensitive to such changes. The analysis projected that average penguin abundance would decline by up to 30 percent.

The team also found that currently permitted rates of krill fishing increase the risk for depletion of some predator populations but have less impact than ocean warming. However, stopping krill fishing would somewhat offset the combined effects on krill predators of harvesting and ocean warming, but this positive impact would vary by location and predator group.

Modeling krill and their predators

The researchers used a mathematical model to explore various climate change and fishing-pressure scenarios off the Antarctic Peninsula and in the Scotia Sea, an area of the southwestern Atlantic Ocean north of the peninsula. They also simulated population dynamics of Antarctic krill and the four krill-dependent predators.

The model predicts that climate change is likely to lower krill growth rates and by extension the amount of krill available for predators to eat. Reducing fishing pressure on krill helped to lessen the effects on biomass.

Some predator groups would be more vulnerable to the impacts of current krill catch limits. For example, although penguins would be hit hardest by warming-related krill reductions, they also would benefit the most by halting the krill fishery.

Although managers have set only regional catch limits for krill, this study indicates that this fishery may require management at a local scale to help mitigate the impacts of climate change on this ecosystem. The Commission for the Conservation of Antarctic Marine Living Resources (CCAMLR) manages Antarctic krill fisheries under a mandate from its member nations to protect the Southern Ocean’s diverse marine life. CCAMLR allocates krill fishing efforts to broad regions but is considering using smaller-scale management units to prevent localized, indirect impacts on krill predators.

The authors argue that targeted, finer-scale management strategies for krill fisheries, combined with feedback management—an adaptive management approach in which catch allocations are varied in response to observations of the system in real time—may help effectively manage krill and krill-dependent predators and mitigate the impacts of climate change on the Antarctic ecosystem. The results of the study will also be useful as CCAMLR considers a proposal to establish a large marine protected area in the Antarctic Peninsula and Scotia Sea region.

“Accurate monitoring systems can provide real-time information on, for example, penguin populations,” Klein says. “And if they are not doing well, we could adjust or restrict fishing in an area.”