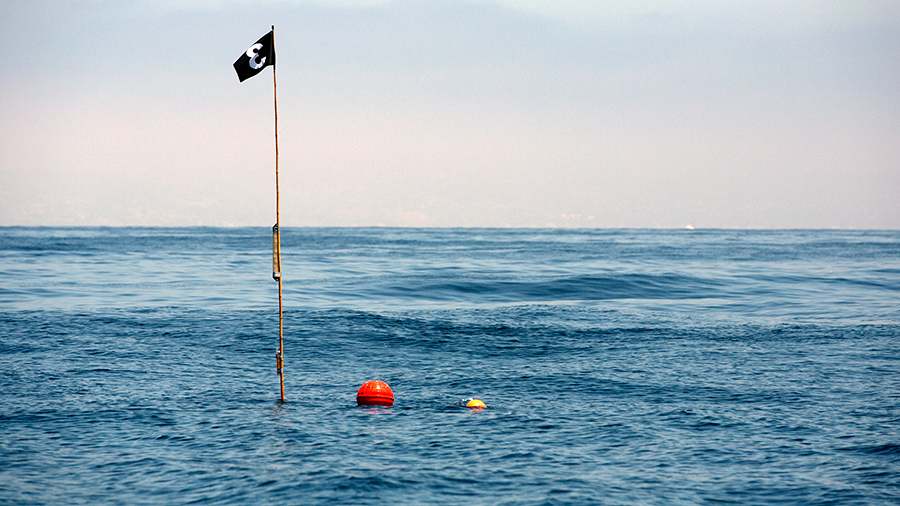 A flag marks the location of a deep-set buoy gear unit. The gear, which is increasingly used to catch swordfish off the West Coast, allows fisherman to quickly retrieve fish after they take the bait.

The adage “if you build it, they will come” rings true when it comes to improving the way we catch swordfish on the West Coast. In recent months, a surge of California fishermen have applied for permits to catch swordfish using deep-set buoy gear, which is far less destructive to whales, sea turtles, and porpoises than drift gillnets—the prevailing fishing method for this species in the region for decades.

More than 30 fishing boats have sought the permits in the past nine months alone. That might not seem like a large number until you consider there are only about 20 boats pursuing swordfish off the California coast with controversial large-mesh drift gillnets. More than 60 percent of the total drift gillnet catch is discarded because it is not marketable, a hallmark of this destructive and indiscriminate fishing gear. On the other hand, more than 90 percent of the fish caught with buoy gear are marketable.

This approach enables fishermen to drop baited hooks from buoys at depths of up to 1,200 feet to reach swordfish where they typically feed during the day. When a bite-indicator buoy is triggered, fishermen can respond within minutes to either land the fish or, if it’s not a swordfish or another marketable species, release it alive. Drift gillnets are far less discriminating and snare much of the marine life in their path.

The Pacific Fishery Management Council and NOAA Fisheries will decide who receives exempted fishing permits to use buoy gear. These permits are exempted because this innovative approach to fishing isn’t yet fully authorized by federal fishery managers for catching swordfish off the West Coast.

As this video shows, buoy gear has proved itself after more than six years of research and testing by the Oceanside, California-based Pfleger Institute of Environmental Research, under the direction of senior scientist Chugey Sepulveda. The results are striking. Buoy gear consistently delivers high-quality swordfish with far less harm to sensitive species than the large-mesh drift gillnets now in use.

Instead of continuing to spend time and money dealing with a litany of exempted permits, federal fisheries managers should fully authorize buoy gear. This innovative method helps fishermen reap premium prices for their catch because buoy gear allows them to land swordfish immediately and bring them to market quickly. And in the process, sea turtles, whales, and dolphins get a break from indiscriminate and destructive drift gillnets.

West Coast residents take pride in managing natural resources sustainably. However, many would be surprised to learn that off the California coast, thousands of animals are unnecessarily entangled and killed by an indiscriminate form of fishing gear targeting swordfish and thresher sharks.