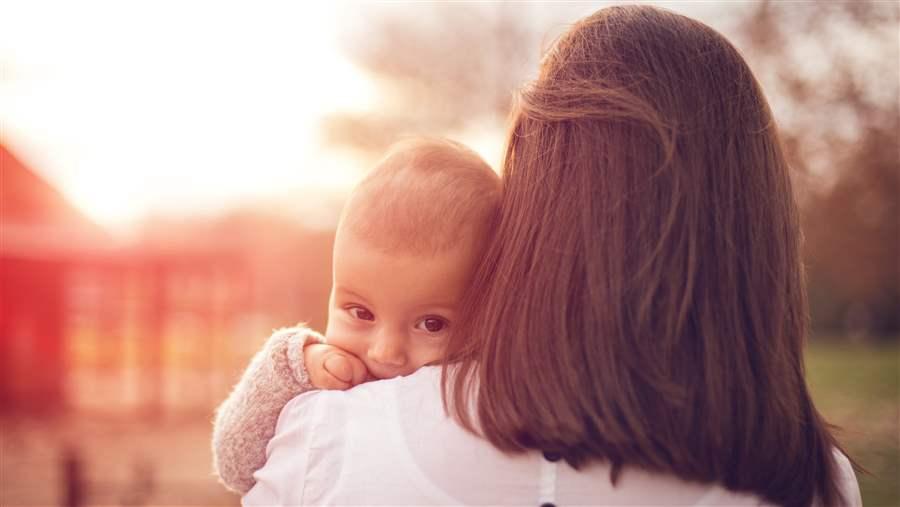 This analysis was updated on Jan. 2, 2018, to more accurately reflect how much the government spends to support child care and to clarify how the child tax credit can be used.

Child care is essential for many American families, but most parents say they have difficulty finding affordable, high-quality care in their community, with the sentiment cutting across race, income, and educational background. The federal government helps families afford child care through a combination of tax credits and spending programs.

Despite these supports, however, child care for many families makes up the largest household expense, exceeding even housing, transportation, and college tuition, and affecting family income and expenditures. Lack of access to affordable care can drive parents, particularly mothers, to drop out of the labor force in a way that hinders long-term earning potential, take on unsustainable debt, make other budgeting decisions that leave them worse off, or compromise on the quality of care their children receive.

This analysis examines seven fiscal mechanisms—two tax provisions and five spending programs—through which the federal government supported family access to child care in fiscal year 2016. (See Figure 1.) As the U.S. House of Representatives and Senate prepare to reconcile differences between their tax bills, both of which propose changes to the tax provisions discussed here, the time is ripe for important conversations about how the federal government funds child care for some families and whether that support is sufficient. 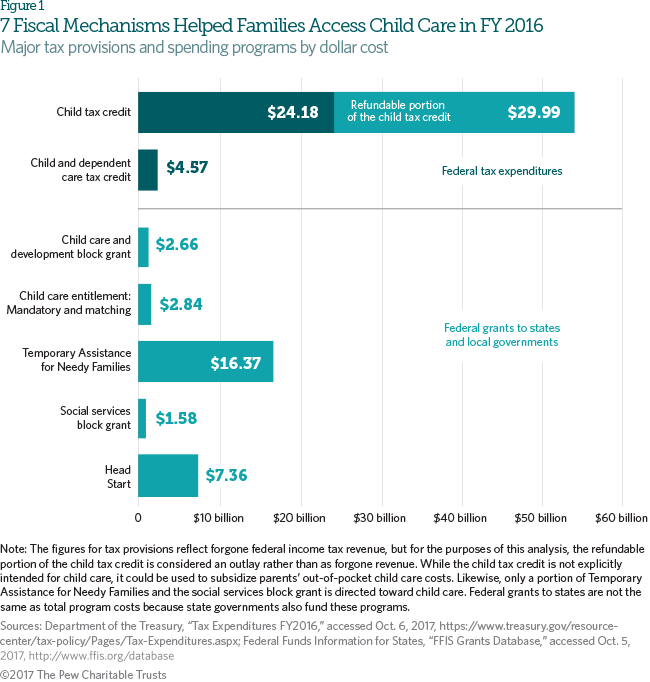 Tax provisions for families with children

This analysis focuses on tax credits, which reduce a filer’s tax liability and therefore also decrease the income tax revenue the federal government collects. The federal government also supports families through other tax provisions such as deductions, exclusions, and exemptions, which reduce a filer’s taxable income rather than taxes due. One common example is employer-provided flexible spending accounts, such as the child care tax exclusion and the dependent care assistance program.

The way tax credits are structured meaningfully affects who benefits from them and how. For the credits discussed here, eligibility and the amount that can be claimed are based on taxable income. The amount that may be claimed increases with income up to the maximum credit. Above a certain income threshold, however, the available amount starts decreasing until it phases out for higher earners. A credit’s reach can be expanded or restricted by changing the income thresholds for eligibility or the maximum credit amount.

Tax credits also come with trade-offs. For example, because they are provided in a lump sum after households file their taxes, families do not realize the benefit until long after they make child care decisions and incur expenses. This can strain households that need consistent support and may not have the capacity to wait for help. Tax credits also have relatively high rates of improper payment, partly because the Internal Revenue Service lacks the resources to ensure that filers are thoroughly screened for eligibility.

Although not explicitly focused on child care, the child tax credit (CTC) provides families up to $1,000 per child per year to offset the costs of raising children. The Tax Policy Center estimates that almost 70 percent of all families with children will benefit from the credit in 2017. The credit enjoys broad bipartisan support because of its extensive financial impact on working families. According to the Center on Budget and Policy Priorities, this credit “lifted approximately 2.8 million people out of poverty, including about 1.6 million children, and lessened poverty for another 13.3 million people, including 6.6 million children,” in 2015.

Although the credit itself is nonrefundable, it has a refundable component in the form of the additional child tax credit (ACTC). Families that do not owe enough taxes to receive the full amount of the CTC may claim the ACTC, which refunds 15 percent of earnings above $3,000 to the maximum credit amount. However, the $3,000 earnings threshold makes this credit less accessible to extremely low-income families. The federal government incurred $24 billion in tax expenditures for the CTC in fiscal 2016 plus another $30 billion for the ACTC, or 0.78 percent of total federal outlays that year.

The child and dependent care tax credit (CDCTC) is a nonrefundable credit for working or student adults with children up to age 13 or other dependents, such as elderly family members. It covers 20 to 35 percent of child care costs, depending on family income, to a maximum of $1,050 per child or $2,100 per family. The federal government incurred $4.6 billion in forgone revenue for this credit in fiscal 2016. Because it is nonrefundable, the child and dependent credit does not benefit families that do not owe income tax. A 2013 analysis by the Urban Institute found that families with children in the bottom fifth of the income distribution did not realize any benefit from the credit.

Grants to states and local governments

The federal government makes grants to states and local governments to cover part of the costs of administering social programs that help families access child care. Federal fiscal 2016 spending for the programs described below, in addition to outlays for the ACTC described in the previous section, was slightly more than $60 billion, or almost 2 percent of total federal outlays ($3.9 trillion).

Spending programs categorized as block grants—in which the federal government provides funding to states, which then operate the programs according to federal guidelines—give states considerable control over how they spend the funds. In general, the state programs provide more frequent payments to participating families than tax credits do and so align better with families’ regular spending. However, they also incur much higher administrative costs because they take up time and resources evaluating participants’ eligibility. Further, large portions of block grant funding sometimes do not reach their intended beneficiaries, and some programs, particularly Temporary Assistance for Needy Families (TANF) and the child care and development block grant (CCDBG), described below, have suffered from declining participation among eligible populations.

The entitlement to states has two funding elements: mandatory funds, which states receive without an obligation to contribute additional resources; and matching funds, which states must supplement with their own monies. In fiscal 2016, the federal government granted $2.8 billion under the program, or 0.07 percent of total federal outlays.

The Center for Law and Social Policy characterizes the CCDBG as “the largest source of federal funding to states to provide child care assistance for low-income families and improve the quality of child care.” Because the program is a block grant, states have substantial discretion in setting its rules. They usually make funds available to families in the form of vouchers that generally do not cover the full cost of care. Several states have long waiting lists for this assistance with fewer than 1 in 6 eligible children receiving support from the block grant. An estimated 1.4 million children participated in the program in 2015, the lowest in 17 years. In fiscal 2016, the federal government granted $2.7 billion through the program, or about 0.07 percent of total federal outlays.

The primary goal of TANF is to provide financially vulnerable families with needed cash assistance, child care subsidies, and work support. However, some states have redirected the money to fill gaps in their budgets or to substitute for state funding of other social programs such as state earned income tax credits, prekindergarten, or child welfare. In fiscal 2016, the federal government granted $16 billion through TANF, or 0.42 percent of total federal outlays.

The federal government designed the social services block grant to provide assistance for at-risk populations—the elderly, people with disabilities, and children and adults vulnerable to neglect or abuse—and states have substantial flexibility in how they use the funding. In fiscal 2013, 27 states and the District of Columbia used the block grants for child care, amounting to 4 percent of total program funding, or $1.6 billion, not including supplemental funding in response to Superstorm Sandy. The federal government also awarded $1.6 billion in block grants in fiscal 2016, or 0.04 percent of total federal outlays.

Head Start and Early Head Start seek to prepare young children from families with incomes at or below the federal poverty threshold for primary education and help break the cycle of intergenerational poverty. Participants can also access family support services related to health and parenting. In addition to children in poverty, those in foster care, who are homeless, and are from families that receive public assistance are also eligible for Head Start services, regardless of income, but estimates suggest that less than 50 percent of qualified children are enrolled in Head Start and less than 5 percent in Early Head Start. The federal Administration for Children and Families provides funds to public or private agencies that administer these programs at the local level. During the 2015-16 school year, Head Start programs served 1.1 million children and their families. In fiscal 2016, the federal government provided $7 billion for Head Start, or 0.19 percent of total federal outlays.

Is Our Economy Ready for the Future of Employment?

The Pew Charitable Trusts and the W.K. Kellogg Foundation, in partnership with the Senate Economic Mobility Caucus, hosted an event on July 24 to explore how technology and the movement toward a knowledge- and service-based economy are affecting employment. The discussion, which was moderated by Kellogg&rsquo;s Jonathan Njus, highlighted a diverse set of perspectives&mdash;examining Americans&rsquo; attitudes about the job market, the growing interest in alternatives to higher education, and the status of economic mobility.&nbsp;

The Census Bureau released the latest edition of its annual report &ldquo;Income and Poverty in the United States&rdquo; on Sept. 12, and the findings indicate economic improvements for the typical American family in 2016. According to the study, median real household income reached $59,039, up 3.2 percent from 2015, the second consecutive annual increase. Also for the second year in a row, the poverty rate decreased&mdash;from 13.5 percent in 2015 to 12.7 percent in 2016. But despite these encouraging signs, research from The Pew Charitable Trusts suggests that other variables, particularly income volatility and financial shocks such as unexpected expenses, mean income gains may not be enough to alleviate financial instability in many households.&nbsp;

Many recent tax reform proposals have included changes to two provisions that apply to nearly all federal filers&mdash;the standard deduction and personal exemption. Revisions to these could affect not only federal revenue and filers, but also several states that incorporate them into tax calculations.