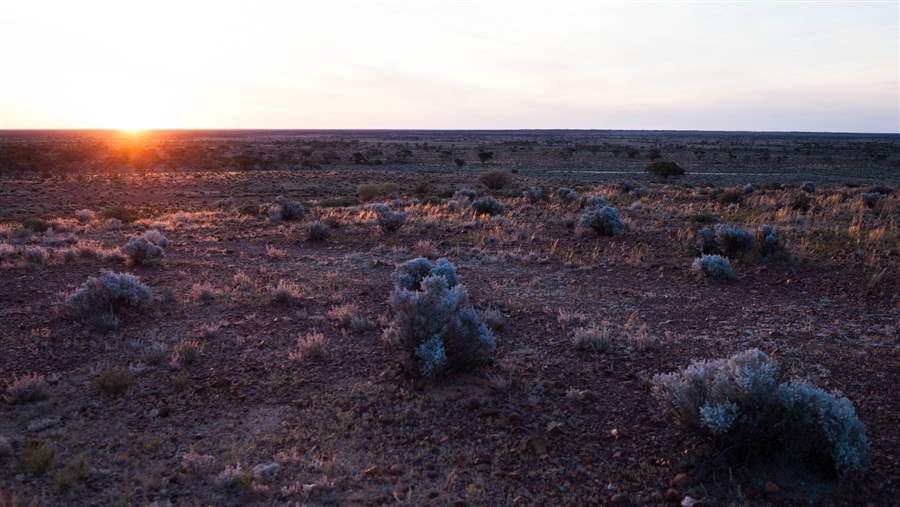 The sun sets over the vast Bon Bon Station, a former sheep station 690 kilometers (around 430 miles) northwest of Adelaide that is managed for conservation by Bush Heritage, a nonprofit organization that seeks to protect land with outstanding conservation value.

The Outback of South Australia is a rugged, arid mosaic of desert, plains, and mountains. The region is home to vast and sparse landscapes, small communities, and fascinating wildlife, including the shingleback lizard and a tiny member of the kangaroo family, the burrowing bettong.

In September, members of The  Pew Charitable Trusts’ Outback to Oceans team headed into this remote country to meet and learn from land managers who are looking after Outback landscapes. In the state of South Australia and throughout the country, the Outback is threatened by invasive species and wildfires and lacks enough land managers to actively counter those threats. Pew is working with Indigenous communities and the state and federal governments to help preserve Outback lands and cultures.

The following photos showcase the landscapes, animals, and plant life of the South Australian Outback, as well as its most valuable asset: the people who live there.

From Bon Bon Station, we drove just over 300 kilometers (around 185 miles) to Roxby Downs, a mining town and site of the large Olympic Dam mine. In 1997, the Australian company BHP donated part of the land originally leased out for the mine to conservation organization Arid Recovery. In turn, Arid Recovery has fenced off an area free of all introduced rabbits, foxes, and cats and reintroduced native species that had disappeared because of predation. The 12,000-hectare (nearly 30,000-acre) sanctuary is the largest of its kind in Australia and has a booming population of bettongs, bilbies, and bandicoots.

During a tour led by Arid Recovery General Manager Kath Tuft, I was struck by the thousands of tracks in the sand, all from native mammals—none of which I’ve seen in the wild in over 40 years as an ecologist in Australia.

The minute the sun went down, the reserve started bouncing with life as all the nocturnal mammals whose tracks we had seen earlier—burrowing bettongs, western barred bandicoots, bilbies, stick-nest rats, plains mice, and spinifex hopping mice—came out to feed.  The bettongs were by far the most common, and I lost count of how many I saw. About the size of a rabbit, this was once the most common species of kangaroo in Australia. It’s the only member of the kangaroo family that digs burrows, and huge bettong warrens covered much of the Outback until cats and foxes were introduced.  On the mainland, bettongs now exist only within fenced sanctuaries where predators have been eradicated.

Barry Traill is director of Pew’s Outback to Oceans program in Australia.