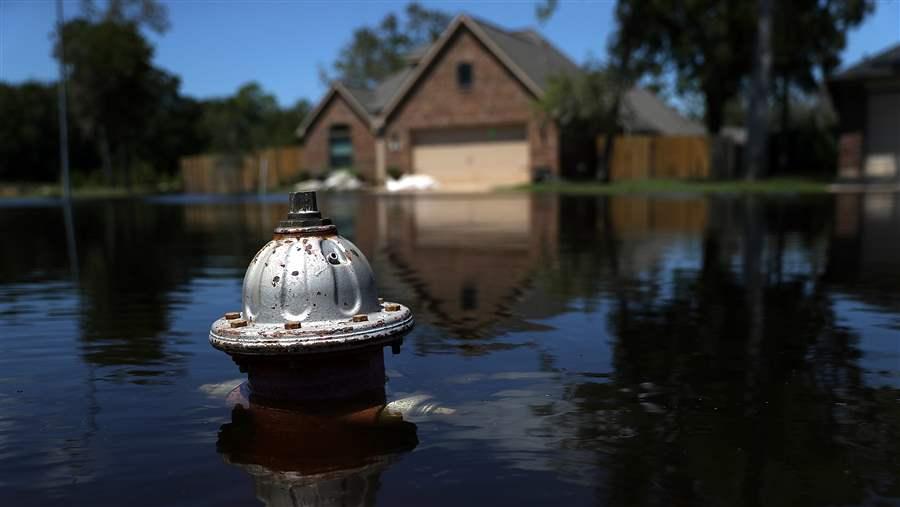 The top of a fire hydrant peeks through floodwaters in front of a home after the floods of Hurricane Harvey in Richwood, Texas.

It will take months to sort out the full extent of impacts from hurricanes Harvey, Irma, and Maria, but these storms have already made this much clear: Communities and infrastructure in many parts of the U.S. are ill-prepared to handle major flooding.

In addition to inundating hundreds of thousands of homes, flooding from the three hurricanes forced schools, hospitals, fire and police stations, and other critical facilities to close, jeopardizing public safety, disrupting essential services, and straining communities and local economies.

A recent analysis by The Pew Charitable Trusts found that Florida and Texas have the second- and seventh-largest number of public schools in counties that received high flood-risk scores, respectively. Schools in these communities were among the most-impacted by hurricanes Harvey and Irma: Every school in Florida closed for days as a result of Irma, and those in Houston were shuttered for at least two weeks during and after Harvey.

Many have yet to reopen, and some will remain closed for months—possibly for the remainder of the school year. This is disrupting learning for children, upending daily routines for families, and escalating repair costs for communities. In Puerto Rico, Hurricane Maria completely destroyed some schools; districts in the continental U.S. are making adjustments to accommodate an influx of students from those communities.

Flooding from the storms also hindered operations at other critical facilities, including medical centers and fire and police stations. During Harvey, local, state, and federal first responders rescued more than 122,000 people, while 24 hospitals were ordered to evacuate. In the Houston area, the flooding was so severe that it delayed the rescue of residents in one nursing home, who sat in waist-high water while awaiting the arrival of first responders. Floridians grappled with similar challenges from Irma, which forced nearly 50 hospitals to close and more than 200 medical facilities to be evacuated. And the Federal Emergency Management Agency reported that at one point 58 of the 69 hospitals in Puerto Rico were without either electricity or fuel.

Some estimates suggest that damage from the three hurricanes could exceed $250 billion. All of this damage is in addition to the $500 billion in losses the U.S. had already experienced since 2000 from flood-related billion-dollar disasters. And there’s still more than a month left in the 2017 hurricane season.

These storms hit just after the Trump administration rolled back a federal flood standard, reverting to a national policy established 40 years ago—a move akin to looking into the rearview mirror while trying to navigate the road ahead. In the days following Hurricane Harvey, the administration said it was working on an updated flood standard, but the country can no longer afford to wait for sensible, forward-looking policy. That is why Pew, along with 28 other signatories, including fiscal conservatives, engineers, architects, the insurance industry, and nonprofit organizations, recently submitted a letter to the White House supporting the urgent need to establish stronger flood-ready standards for federally funded building and rebuilding projects that take into account future risks.

For anyone who had doubts, the recent storms make it clear that federal policymakers must stop underestimating flood risk. Now more than ever, the U.S. needs stronger standards for federally funded building projects to ensure that American communities and infrastructure can withstand floods. Many states and municipalities already have flood standards that account for tomorrow’s flood risk, so why doesn’t the nation?

It’s well overdue for the federal government to follow suit by ensuring that any taxpayer dollars invested in flood-prone areas are spent wisely.