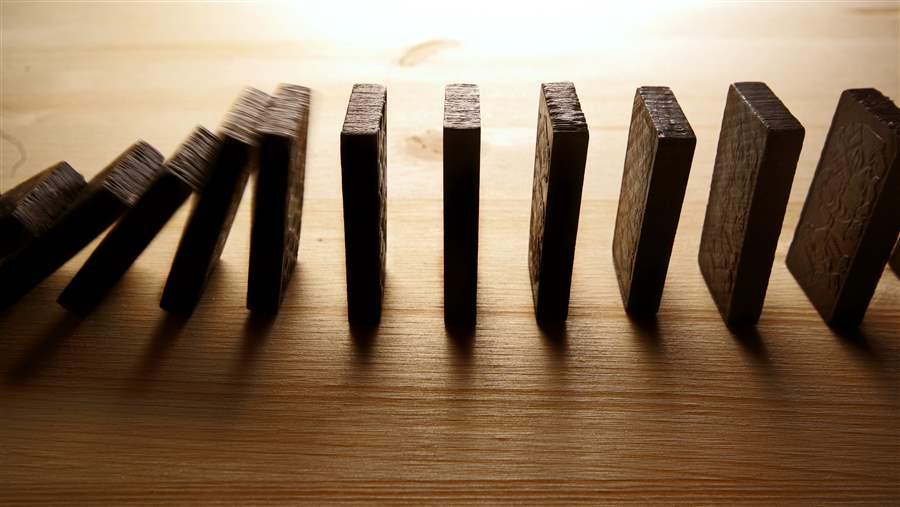 The fiscal year 2018 budget blueprint released by the Trump administration proposes cuts that, if adopted by Congress, would undermine efforts critical to protecting the health of Americans. Pew works on a number of public health issues that could be affected.

Each year, an estimated 48 million people in the U.S. are sickened by a preventable foodborne disease. Americans are just beginning to benefit from the FDA Food Safety Modernization Act (FSMA), enacted with overwhelming bipartisan support in 2011 to reduce foodborne illness. The proposed budget would cut at least $83 million from the Food and Drug Administration’s food safety program, which is more than twice the amount of the funding increase approved for FSMA’s implementation by Congress with bipartisan support earlier in May. Such a reduction would undermine FDA’s ability to effectively enforce the FSMA rules, especially those related to imported food, and would fail to provide state agriculture departments with the resources they need to ensure compliance with the produce safety regulations.

In 2013, the Centers for Disease Control and Prevention sounded the alarm about the growing and urgent threat posed by antibiotic-resistant bacteria, and since then other leaders from around the world, including the World Health Organization and United Nations, have joined the call to action. However, the deep cuts proposed for a number of federal agencies—including the CDC, FDA, National Institutes of Health, U.S. Department of Agriculture, and others—could limit their ability to implement numerous policies and programs for combating the growing threat of antibiotic-resistant bacteria. In particular, the proposed $22.7 million cut for CDC’s work on antimicrobial resistance, combined with the overarching reductions to the agency’s budget as a whole, would make it nearly impossible to track outbreaks of disease caused by resistant bacteria and to support stewardship efforts critical to preserving the effectiveness of existing antibiotics. Additionally, the proposed $838 million cut in infectious disease research at NIH would harm efforts to discover urgently needed antibiotics. Sustained commitment and funding are needed to make continued progress against antibiotic resistance.

The epidemic of opioid overdoses continues to claim lives across the United States. Congress has made significant strides in recent years to increase access to treatment for opioid use disorder through policies that expand health care coverage under Medicaid and private insurance. In fact, more than a million people with substance use disorder became eligible for Medicaid when states expanded their programs, and states rely on federal dollars to provide access to effective therapies. The administration’s proposal seeks to cut $610 billion from Medicaid funding for states over the next decade, which could put treatment out of reach for many.

The increased use of electronic health records (EHRs) has the potential to improve the safety and quality of patient care, including through better information sharing among hospitals (interoperability) and ensuring that clinicians can efficiently use these systems (usability). As part of the 21st Century Cures Act, Congress instructed the Office of the National Coordinator for Health Information Technology (ONC) to prioritize enhancements in both these areas. While the president’s fiscal 2018 budget document also emphasizes the importance of enhanced interoperability and usability, the proposal would reduce the ONC budget by $22 million, or more than a third of its total funding. If enacted, these budget cuts could impede ONC’s ability to promote greater interoperability and improve safety through better EHR usability.

In recent years, Congress has recognized all of these issues as public health priorities and provided bipartisan support for funding to address them. As the budget process moves forward on Capitol Hill, I hope that members of Congress will again work together to ensure sufficient resources for these efforts that protect the health and safety of the American people.

Antibiotic-resistant bacteria pose an urgent and growing public health threat. The more we use existing antibiotics, the less effective these life-saving drugs become. Pew supports policies and research that spur the creation of new antibiotics to defeat resistant infections; ensure that antibiotics are prescribed for human use only when necessary; and reduce the need for antibiotics in food animals.

The transition from paper to electronic health records has not reached its full potential to enhance health care coordination and improve patient safety. Pew is conducting research to address this challenge and working with stakeholders to help ensure that digital records are accurately matched to each patient, medical information can be effectively exchanged among hospitals and clinicians, and that the design and use of electronic health records does not lead to unintended harm.

Food contaminated with pathogens cause an estimated 48 million illnesses, 128,000 hospitalizations, and 3,000 deaths annually in the United States. Pew worked to modernize food safety approaches used by federal agencies and businesses so that they reflect current risks to human health as well as employ scientific and technological advancements. The project concluded in 2021.

Substance Use Prevention and Treatment Initiative

Substance use disorders and the harms associated with these diseases are a serious, growing public health problem. Nearly 48,000 Americans died from an opioid overdose in 2017. Pew develops and supports policies that would reduce the inappropriate use of prescription drugs while ensuring that patients have access to effective pain medication. .