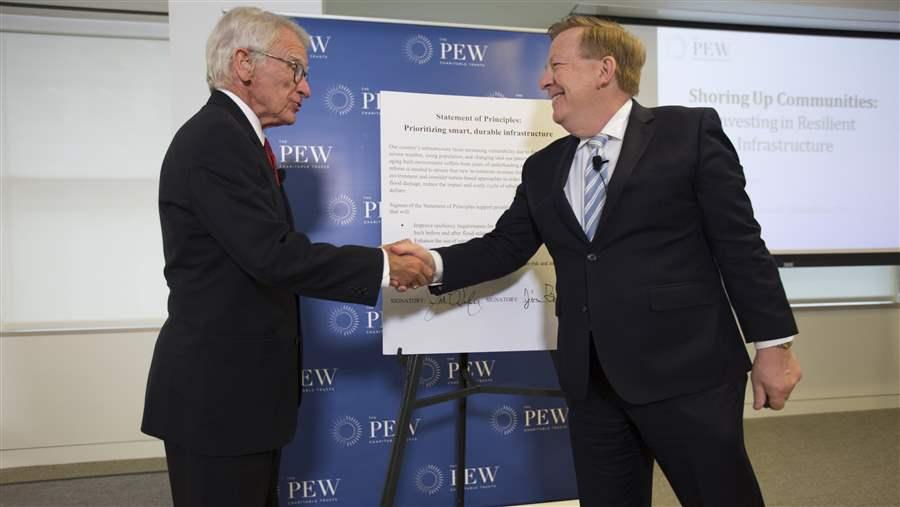 On May 23, the same day the White House released a fact sheet on its infrastructure initiative, mayors and federal policy experts gathered in Washington to discuss strategies to safeguard the nation’s roads, bridges, buildings, and facilities from the impacts of flooding.

The public event, hosted by The Pew Charitable Trusts’ flood-prepared communities initiative, featured two mayors who have modernized their city’s infrastructures to better withstand natural disasters through sound policy, smart investments, and the use of nature-based solutions.

Flooding is the most common and costly natural disaster in the country. In 2016, the U.S. endured five flood-related disasters that each caused more than $1 billion in damages.

Jim Brainard (R), the mayor of Carmel, Indiana, detailed many of the flood-mitigation improvements he has overseen in that city—including enhancing drainage infrastructure and adding green space—during his six terms, a period that saw Carmel’s population grow from just over 31,000 to nearly 90,000.

Here are three takeaways from the mayors’ remarks and a panel discussion on federal infrastructure policy.

When homes have been destroyed by flooding and rebuilt multiple times, Brainard said, “it doesn’t seem to be a common-sense thing” to keep repeating that cycle.

Riley added that people will support policy change—and the associated costs—if leaders explain the benefits to public safety. “The citizens are smart. They know you have to make investments. They want their community to be safe,” he said.

The mayors also signed a proclamation encouraging resilient infrastructure investments before and after flood-related catastrophes, reduction of unsustainable development in high-risk areas, and use of more natural defenses in planning and preparedness. To drive that point home, Harriet Tregoning, a former Housing and Urban Development Department official who spoke on a panel discussing federal programs, said, “Why would anyone build a berm or levy if a waterfront park would provide the same level of protection from storm surge?”

Work across sectors and political aisles 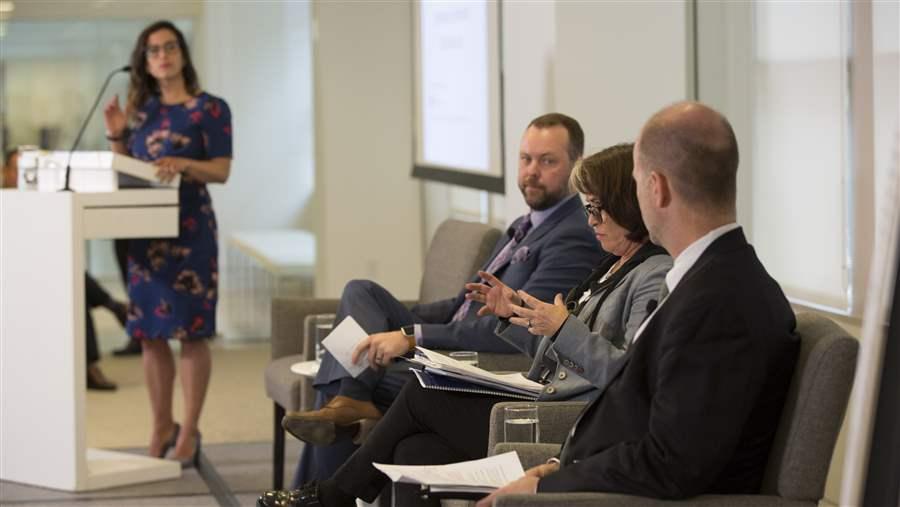 Following natural disasters, the panelists agreed, states and municipalities must coordinate with the federal government on longer-term initiatives to reduce a city’s or community’s flood risk, for example by retrofitting facilities to better withstand storms and relocating hazard-prone buildings.

Participants in the event agreed that flood policy should be bipartisan. Charles Brittingham, a former policy adviser to Senator David Vitter (R-LA) recalled collaborating on such issues with his Democratic counterparts on the Senate Committee on Environment and Public Works. Brittingham is now a senior vice president at the government relations firm Cassidy Associates in Washington.

“We found commonality,” he said. “We might not always [have] agreed, but we were able to come up with solutions that would benefit our members and our caucuses.” 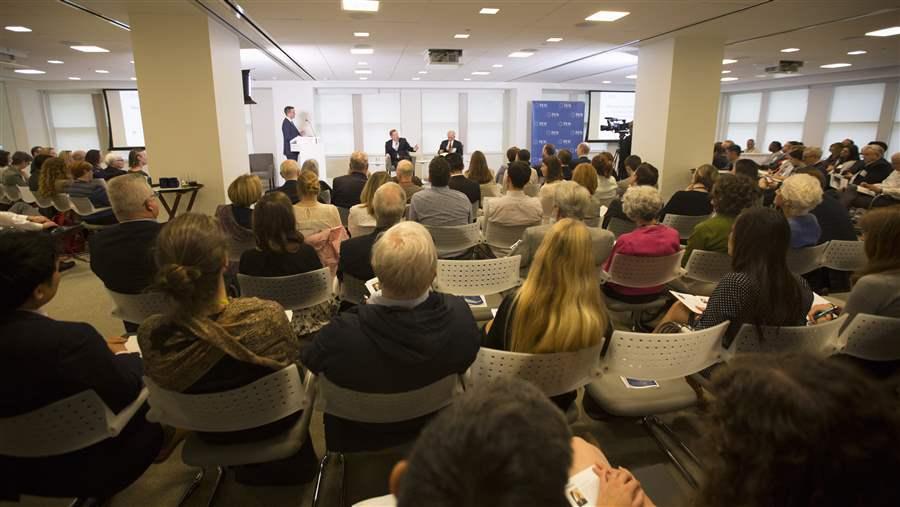 Given a choice between spending millions of dollars to provide protection or billions down the road in recovery costs, Brittingham said, “Where’s the better investment for the taxpayer dollars? I think it’s on the front end.”

By designing infrastructure projects with a long-term vision, local leaders can promote local job growth, revitalize neighborhoods, and enhance long-term economic opportunities. As van der Tak noted, today’s 100-year storm is not tomorrow’s 100-year storm. Water, energy, and transportation systems should be built to withstand weather conditions in the decades to come—not those of the past.

“One of the smartest things to do is to not build in the wrong place the first time around,” Tregoning said. The Federal Flood Risk Management Standard (FFRMS) ensures that federal agencies consider current and future risk when taxpayer dollars are used to build or rebuild in flood plains so projects last as long as intended.

Our country’s aging built environment, stressed by growing populations and changing land-use patterns, is increasingly vulnerable to the impacts of more frequent and severe storms. The Trump administration and Congress are proposing an extensive infrastructure overhaul, and it’s critical that they stop using outdated policies to plan for the future.