This analysis was updated on June 2, 2017, to note that federally funded positions are not included in the census data.

With the school year soon coming to a close, many teenagers will be looking for summer jobs. But if the recent past is any indication, they may have a hard time finding one.

A Pew analysis finds that far fewer summer jobs have been available for young people in Philadelphia in recent years than there once were—and that Philadelphia lags many of its peer cities in teen employment. This finding is based on data from the Center for Economic Studies of the U.S. census, which looks at how many young people, ages 14 to 18, had a job on July 1 of any given year.

In 2015, the last year for which data were available, 6,288 Philadelphia teens in that age range had summer jobs. Ten years earlier, the number was nearly twice as high, at 11,681. In the year 2000, the figure was 15,562—meaning that youth summer employment in the city dropped by nearly 60 percent from 2000 to 2015. (See Figure 1.) The decline was similar for boys and girls, although girls overall had higher summer employment throughout. 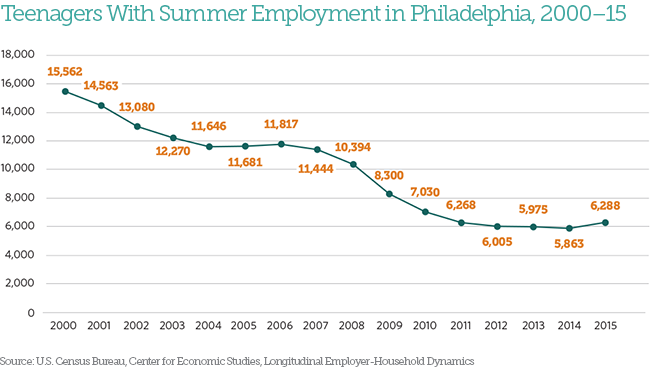 These census numbers do not include unpaid internships, informal work, or summer school. Nor do they include federally funded positions created through programs such as WorkReady Philadelphia. In 2015, WorkReady provided summer job opportunities and paid internships to nearly 9,000 young people using funding from federal and local government sources as well as 125 private employers. Those numbers have fluctuated since 2000. Because WorkReady serves young people ages 12 to 24 and the census data cover only those ages 14 to 18, it is not possible to combine the two totals.

Nationally, the 2015 teen summer employment rate—calculated by taking the number of teens employed divided by the full teen population—was 15 percent; in Philadelphia, it was 9 percent. (See Figure 2.) Since this data is collected by county, not by city, it is available only for cities that also are counties or those, like New York, that consist of several counties. Among those cities, Philadelphia’s rate of youth summer employment was the lowest, although it was virtually the same as that of New York. 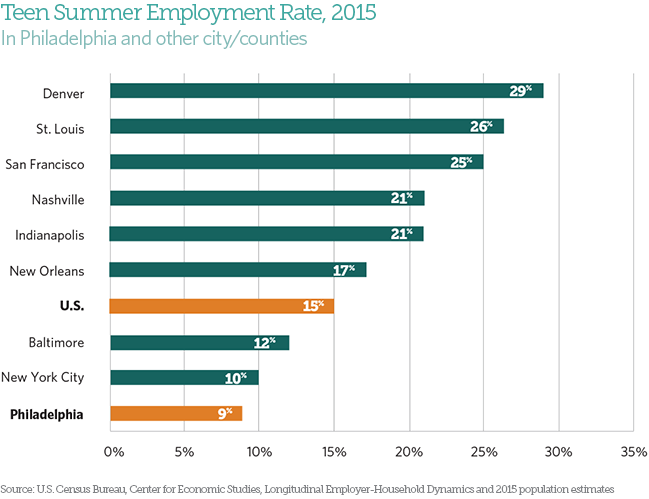 In most of these city/counties, the teenage employment rates increased from 2010 to 2015, in some cases by substantial amounts. Philadelphia’s rate remained flat. (See Figure 3.) 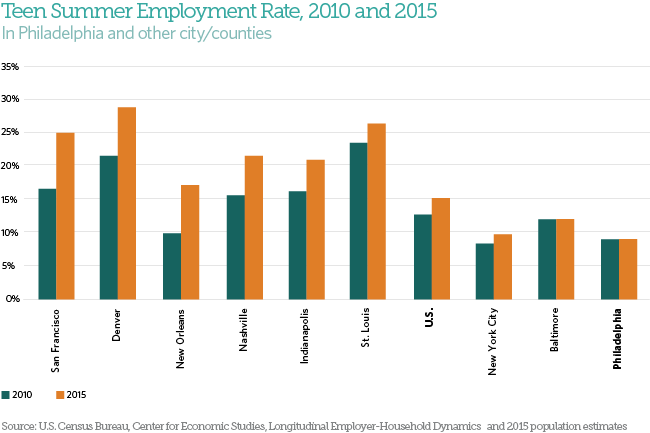 For teens, having a summer job can be a valuable experience, a chance to earn money, and sample life in the workplace. Research shows that summer employment has positive long-term effects, including improved academic performance1 and higher wages as an adult.2 And there is some evidence to suggest that those who have had summer jobs are less likely to commit crimes in the year after they finish the work.3

City officials are aware of the value of these jobs, and Mayor Jim Kenney has called for there to be 16,000 paid summer opportunities through the Philadelphia Youth Network by 2020. Kenney has noted that he first became a city employee by working a summer job at the city's Parks and Recreation Department in the 1970s.

“Philadelphia leaders recognize the importance of increasing employment opportunities for young people,” says Stephanie Gambone, executive vice president of the Philadelphia Youth Network, which manages WorkReady. “Through WorkReady, Philadelphia has one of the more robust employer-funded summer jobs programs in the country, though it is not represented in the data.”

Larry Eichel is the director of Pew’s Philadelphia research initiative, and Katie Martin is a researcher on the team. 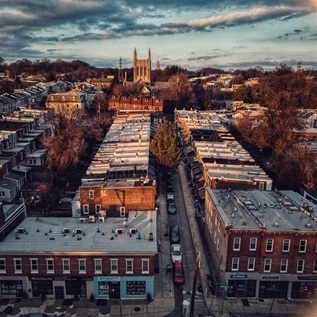