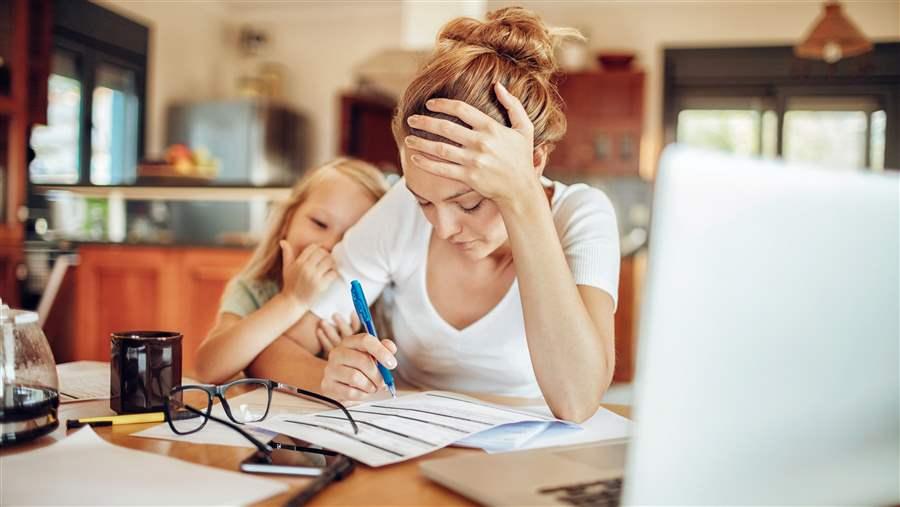 Saving money isn’t easy. Many Americans say they have trouble saving because of unexpected expenses and strains on their budgets, and along with the fact that more than a third lack access to an employer-sponsored retirement system, this means that major hurdles can arise as they build short- and long-term savings. On March 30, The Pew Charitable Trusts, in partnership with the National Conference of State Legislatures, hosted a webinar with researchers, state agency personnel, and lawmakers to examine what makes saving so difficult and which strategies, programs, and polices may help families prepare financially.

John Scott and Clinton Key discussed Pew’s research into families’ economic and retirement security. Key highlighted the nationally representative Survey of American Family Finances, which gauges people’s perceptions about their finances—and how their views differ according to income, wealth, and other demographic factors—and found that in 2014, half of respondents said they did not feel secure and 71 percent said it was hard to save because of financial shocks, such as expenses they don’t plan for.

Further Scott noted that many workers are not saving enough for retirement. Speakers at a recent Pew event voiced concerns that some Americans may not feel financially confident enough to have their money locked away in a designated retirement plan because they are worried about potential near-term financial shocks. At the same time, limited access to workplace retirement plans can create significant barriers for many families that want to save more for the long term. For example, even when employers offer plans, rules—such as requiring a minimum number of hours worked—exclude many; almost three-quarters of part-time workers who do not participate in their employer-sponsored plan say they are ineligible. Among qualified full-time workers, 44 percent say affordability is their top concern.

Researchers are investigating new ideas to help address workers’ complex savings needs, particularly programs that link short- and long-term savings by allowing people to seamlessly and automatically set funds aside both for emergencies and their retirement. One proposal is the retirement plan “sidecar” savings program in which payroll contributions would be automatically deposited into a special short-term account until a savings threshold is reached, after which funds would flow into the worker’s retirement account. Money in the sidecar could be accessed without penalty in the event of a financial shock, leaving the retirement savings to grow. Following a depletion of the sidecar balance, contributions would again be directed to the sidecar until the saving level is restored.

Similarly, states concerned about their resident’s well-being, as well as looming social spending for those without adequate retirement savings, are considering an array of policy options. For example, California is one of five states implementing Secure Choice programs to automatically enroll workers in payroll deduction individual retirement accounts (auto-IRAs). Ruth Holton-Hodson of the state’s Office of the Treasurer explained the structure and implementation of the program, which the Legislature enacted in 2012. The law created an auto-IRA plan that enables participation through small employee payroll contributions and requires all private sector businesses with five or more employees that do not already offer retirement benefits to enroll their workers, who then have the choice to opt out. More than 6 million workers across 285,000 employers are potentially eligible for the auto-IRA program, which will be overseen by the state’s Secure Choice Retirement Savings Board but administered by a private financial firm. The accounts will be portable to enable workers to continue contributing if they change jobs within the state. Implementation is ongoing, and the current goal is to phase in employers with over 100 employees by the end of 2018. Smaller employers will be required to enroll their workers or offer an alternative plan later in the implementation process.

Utah’s Legislature pursued a different strategy for increasing access to employer-sponsored retirement plans, choosing to use the tax code to encourage employers to offer savings programs. Utah state Senator Todd Weiler (R) worked for more than two years in collaboration with the state treasurer to draft and pass retirement savings legislation earlier this year. Their bill, the Small Employer Retirement Program, was introduced in 2017 and creates a one-year pilot offering a $500 nonrefundable tax credit to small employers with between 10 and 20 employees that offer a retirement savings plan for their workers. Employers may choose any retirement plan that meets federal regulatory standards. The legislation became law in March 2017 after extended negotiations. The pilot will start in January 2018 and conclude at the end of the year.

This webinar demonstrated a number of ways states can help families increase their short- and long-term savings. Evaluating these models as their implementation proceeds will provide a better picture of what strategies are working best for American families’ savings needs.

Erin Currier directs and Brian Denten is an associate with The Pew Charitable Trusts’ financial security and mobility project. Andrew Blevins is a senior associate with Pew’s retirement savings project.

An examination of gains, losses, and household economic experiences

The balance sheets of American households are showing modest improvement, as are people&rsquo;s attitudes about their financial health. The Census Bureau found that the median household income increased by 5.2 percent from 2014 to 2015, with gains across all income levels. Further, more Americans report feeling financially secure, and fewer say they are unprepared for the unexpected.

Nearly half of California workers are on track to retire with incomes below 200 percent of the federal poverty level. That alarming data point set the stage for a robust discussion on how to implement a law passed by the California Legislature in September that mandates a state-run retirement program&nbsp;for private sector workers.