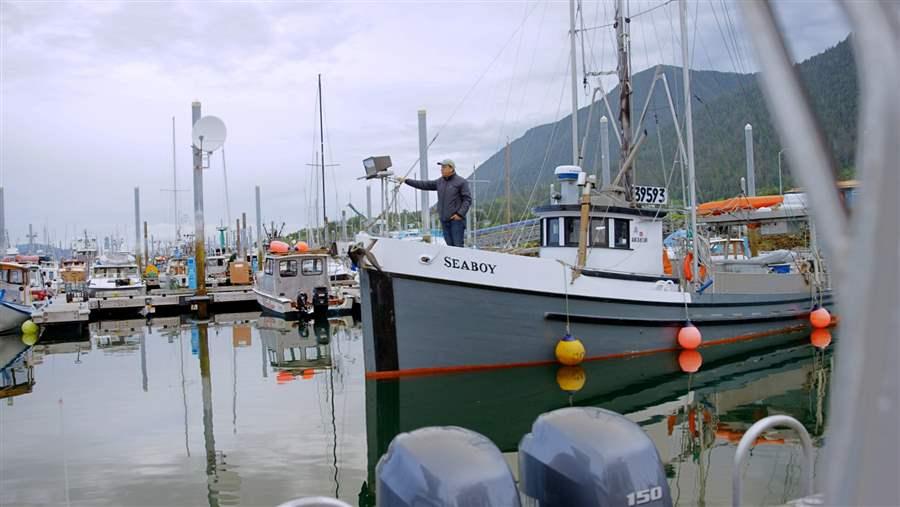 Paul Greenberg on the "Seaboy" in Sitka, Alaska, while filming the FRONTLINE documentary, "The Fish on My Plate," which will air April 25.

Eating seafood at every meal for a year probably won’t fill your brain with facts and insights about sustainable fishing, omega-3 fatty acids, or ocean health, but it almost certainly will bring you closer to the subject matter as you investigate those topics.

That was Pew marine fellow Paul Greenberg’s goal as he consumed over 700 fish meals in 12 months while researching and writing his forthcoming book, The Omega Principle: A Journey to the Bottom of the Marine Food Web. Greenberg was also seeking to learn how such a fish-heavy diet would affect his omega-3 levels and, in turn, his overall health.

Now, a documentary, “The Fish on My Plate,” will reveal the results of Greenberg’s yearlong experiment, and some of the findings in his book. The 90-minute “FRONTLINE” documentary premiers Tuesday, April 25, on PBS.

“Almost half the fish and shellfish consumed in the world is now farmed,” says Greenberg, who also wrote the 2010 New York Times bestseller Four Fish: The Future of the Last Wild Food. "Is that helpful or harmful” to human and ocean health?

The documentary chronicles Greenberg on his yearlong journey researching and writing his book. His deep dive on seafood and the marine environment took him to Norway, the birthplace of modern fish farming; Peru, home to the world’s largest wild fishery; Alaska, which yields a 200 million-salmon fishery each year; and Connecticut, to visit a sustainable ocean farmer who is trying to transform the fishing industry.

In 2014, Greenberg was awarded a Pew fellowship in marine conservation to write a book exploring ocean food webs and the threats they face from overfishing, depletion of forage populations, ocean acidification, and a warming climate. The result is The Omega Principle, in which Greenberg also investigates the heavy fishing of forage fish to feed land animals and humans, and presents options for obtaining an ecologically sound omega-3-rich human diet from more sustainable sources. The book is expected to be published next year.