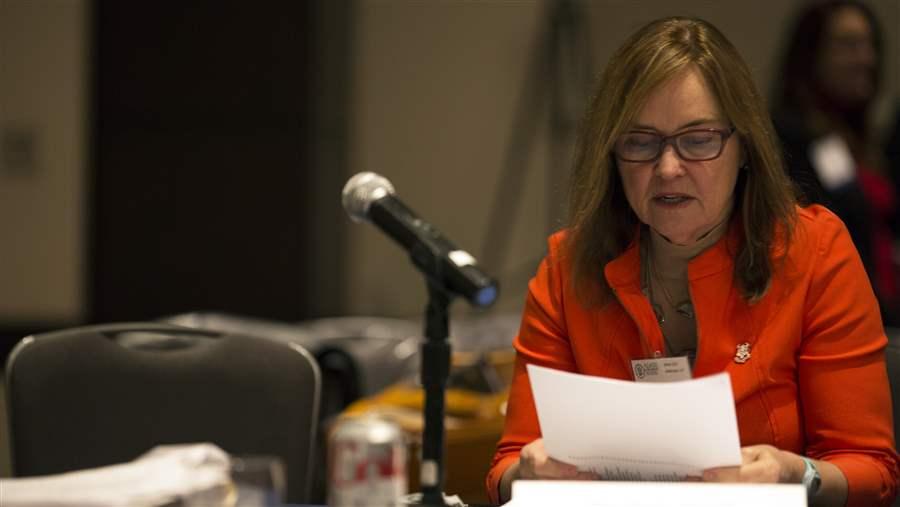 Denise W. Merrill, Secretary of State of Connecticut, spoke at the National Association of Secretaries of State Winter Meeting in 2017 in Washington DC.

The U.S. secretaries of state, charged with running elections, recently met in Washington, D.C., to evaluate the past election season and to discuss what they can do to improve the process. Connecticut Secretary of State Denise Merrill, who serves as the president of the National Association of Secretaries of State, spoke with The Pew Charitable Trusts about the security of voting in America.

Q: What is on the minds of secretaries of state?

A: The security of the elections. We’re seeing the Department of Homeland Security declare elections critical infrastructure. This happened just a few months ago, and we’re still trying to figure out what exactly is the role of the federal government in a highly decentralized system. We’re also thinking about issues of whether or not there is voter fraud, how much is there, and should we have some sort of national voter ID, or even a national ID card—those are the big issues this year.

Q: You’ve been working on reducing long lines at the polls. Do long lines mean people might not vote at all?

A: Oh, absolutely. There’s no problem with a long line if it’s moving. The problem is when it gets stuck because of bad management—not enough poll workers or enough lines, or the lists divided incorrectly. These are all management issues.

We’ve had situations in the past in Connecticut where people would wait three, four hours in a line. That discourages people. Lots of people have to leave and go to work, or go to class, or wherever else they need to be, and I think that’s a travesty. If we had to work on anything more in this country, it’s having enough polling places.

Q: The 2016 election has been covered extensively, but what might the public not know?

A: There are over 100,000 polling places in this country. None of them is connected in any way to the internet. Hacking an election is completely impossible.

Q: Voter fraud has been in the news. Tell us the facts.

A: The reality is that voter fraud is highly unusual, especially the type that’s being discussed: in-person voter fraud. Actual fraud—people impersonating a voter or trying to vote when they’re not eligible to vote—is extremely rare.

In Connecticut this year, we had 12 incidents of someone believing that a person was voting illegally or trying to vote illegally. It would appear that most of these cases are, as usual, an inadvertent mix-up, usually a clerical error—Bob Jr. instead of Bob Sr. Other than that, we almost never see examples of people who are not eligible to vote trying to vote.

Q: We’re also hearing that people are registered in two or three different states. Is that voter fraud?

A: No. Many millions of people are registered in more than one state. That is not illegal. When a voter moves to another state, it’s up to him to remove his name from his former state’s voting registration log and put it on his new one. People don’t realize they’re supposed to do that. It’s easily remedied. Being registered in more than one state is not a problem. But we don’t want people voting twice.

I know Pew has been in the middle of all this and has several excellent reports on this issue.

Q: What about voting online?

A: We’re not there yet. When I ran in 2010 for my first term as secretary of state, I remember saying: “Hey, you can go to an ATM and get cash, so why can’t we vote online?” Well, it turns out there are some pretty big reasons why we can’t vote online. One of them is: You’re an anonymous user on one end, whereas a bank knows who you are, you know who the bank is, and you have fraud protection.

Q: Should the federal government play a role in election administration?

A: That is under discussion. I think the states are doing a pretty good job. Our decentralized system turned out to be a blessing, actually, when security came into question and everyone was worried that the election had been hacked or that the system was somehow involved with the hacking of emails, which is a completely different issue.

But the fact that election administration is so decentralized probably means there’s a limited role for the federal government. Perhaps making sure we have equipment that’s secure—and doing the testing and certification for it—is a role.

A: When a voter gets to the front of the line and says, “My name is Mary Smith, and I’m supposed to be on the list,” and she’s not on the list. That can happen for a variety of reasons, but at the time, it’s a big deal to that voter. List keeping tends to be a big problem, even in a municipal election. We’re getting better at keeping those lists clean and sharing data across states, but we need to do a lot more work.