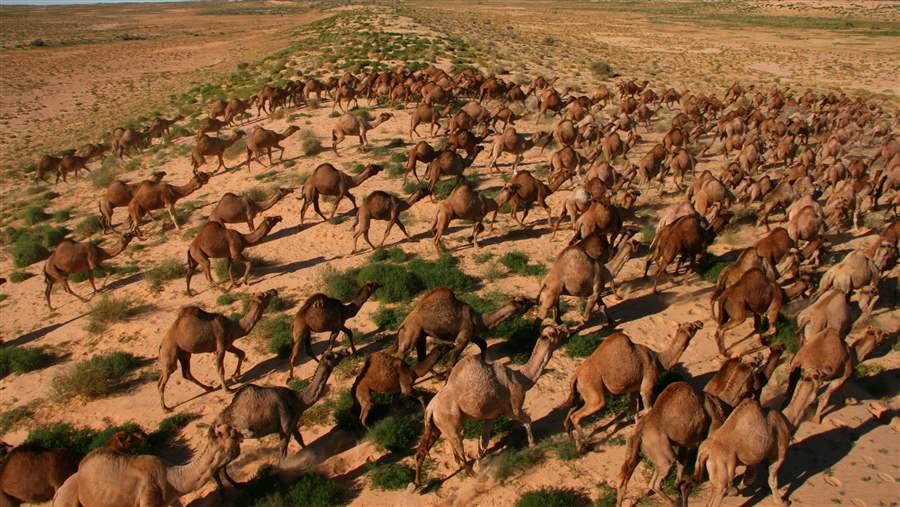 A mob of feral camels moves across arid land in the Australian Outback. The animals, introduced to the area in the 1800s, are causing enormous damage to the ecosystem.

The Australian Outback, one of the last big natural areas left on Earth, is under threat.

Feral camels are one of the most damaging animals in the Outback. Introduced to Australia in the 1800s for transport and construction in the central and western parts of the country, many were released into the wild in the early 20th century, and the population grew fast from there.

By 2010, up to 1 million feral camels roamed the Australian Outback, scientists estimated. One reason they cause so much damage is that the animals eat more than 80 percent of the plant species available—a higher percentage than any other species, native or introduced, consumes.

That impact intensifies when camels number more than two per square kilometer—a density they have surpassed in many desert regions, particularly the Simpson Desert, the western area of the Central Ranges of the Northern Territory, and the Great Sandy and Tanami Deserts.

In response to this growing problem, the Australian Government in 2010 launched the National Feral Camel Action Plan along with a four-year control program to significantly reduce the number of feral camels in rangelands “to protect key biodiversity and other values.”

That did bring camel numbers down—to about 300,000, experts estimate—but the government must redouble its efforts because camel populations can double in just eight to 10 years. Unless numbers are reduced further, the recent gains will soon be squandered.

Moreover, despite the overall reduction, feral camels remain extremely common in some areas, notably in the huge region known as Surveyor General’s Corner, where the borders of Western Australia, the Northern Territory, and South Australia meet.

To ensure effective, long-term management of feral camel numbers, federal and state governments must provide sufficient funding to quickly, safely, and humanely remove large mobs of these animals. This effort must include full consultation with and agreement from Indigenous and non-Indigenous landholders.

Further, all Australians should urge their elected leaders to work for a naturally and culturally healthy Outback, which in turn includes ensuring that feral camel numbers are brought under control.