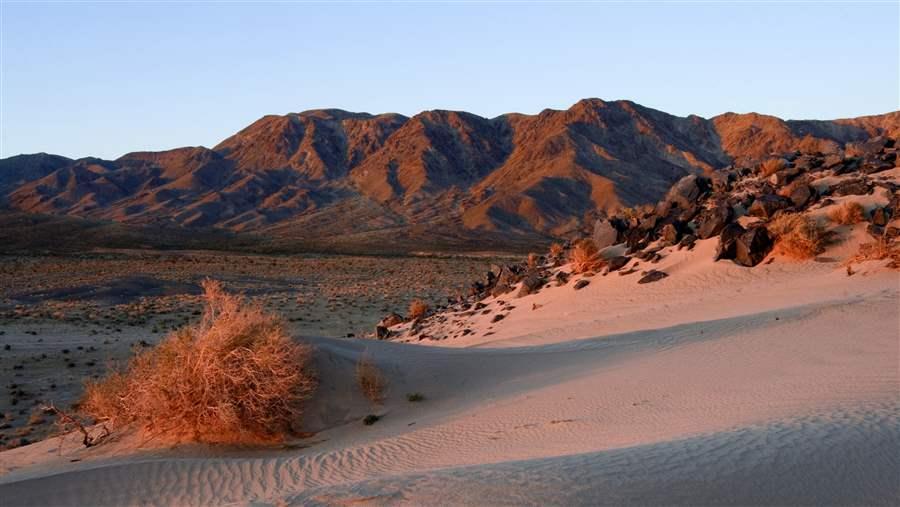 Sun and shadow paint the Soda Mountains, which will be protected as wilderness if Congress passes a bill to safeguard parts of the California desert.

The next move in a multi-decade effort to ensure a balance between conservation and the responsible use of California’s desert is up to Congress. Last month, Senator Dianne Feinstein (D-CA) introduced the California Desert Protection and Recreation Act, which builds on President Barack Obama’s designation last year of three national monuments in the California desert. (Also last year, the Bureau of Land Management announced its Desert Renewable Energy Conservation Plan, which permanently protected significant public lands while making available other public lands in California’s desert for potential renewable energy development.) Rep. Paul Cook (R-CA) introduced similar legislation in the House of Representatives this month.

Sen. Feinstein, California’s chief desert advocate in Congress since she was elected to the Senate in 1992, sponsored the landmark California Desert Protection Act in 1994, establishing 69 wilderness areas and creating Joshua Tree and Death Valley national parks.

The new legislation would add 43,000 acres to the two national parks and designate an additional 328,864 acres as wilderness areas as well as 77 miles of Wild and Scenic Rivers and 142,000 acres of off-road vehicle areas. 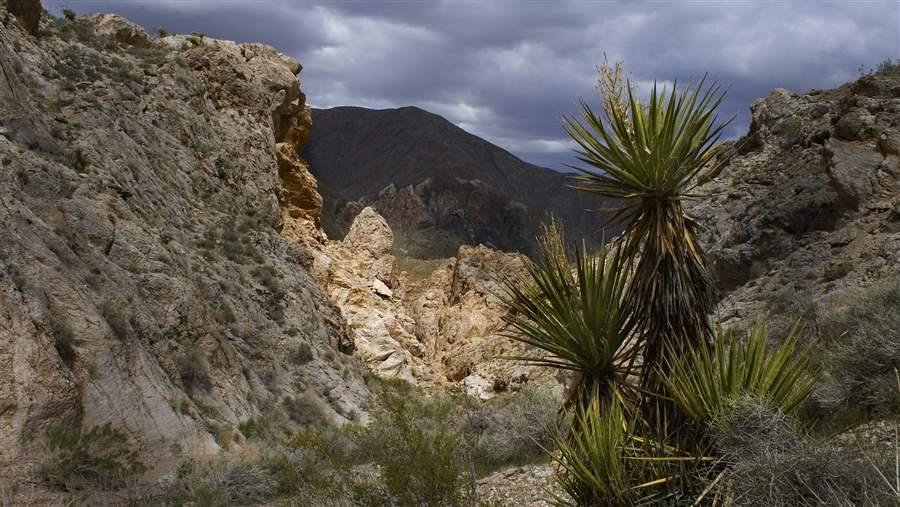 The colorful slopes and rugged ridges of the Avawatz Mountains, part of the proposed protected areas, form steep, narrow canyons as they rise to more than 6,100 feet above the Mojave Desert’s Silurian Valley.

1) Preservation of a remarkable landscape

In addition to the 43,000-acre expansion of Joshua Tree and Death Valley national parks, the California Desert Protection and Recreation Act would add 91,596 acres to the Death Valley Wilderness and create three new wilderness areas: the 87,700-acre Avawatz Mountains, the 8,870-acre Great Falls Basin Wilderness, and the 79,990-acre Soda Mountains Wilderness. The sweeping desert vistas and rugged mountain terrain provide refuge for Native American artifacts as well as myriad animals and plants, from bighorn sheep and desert tortoises to Joshua trees. Conserving these desert areas ensures that visitors may continue to hunt and hike, climb rocks, and enjoy the splendor of this singular landscape. 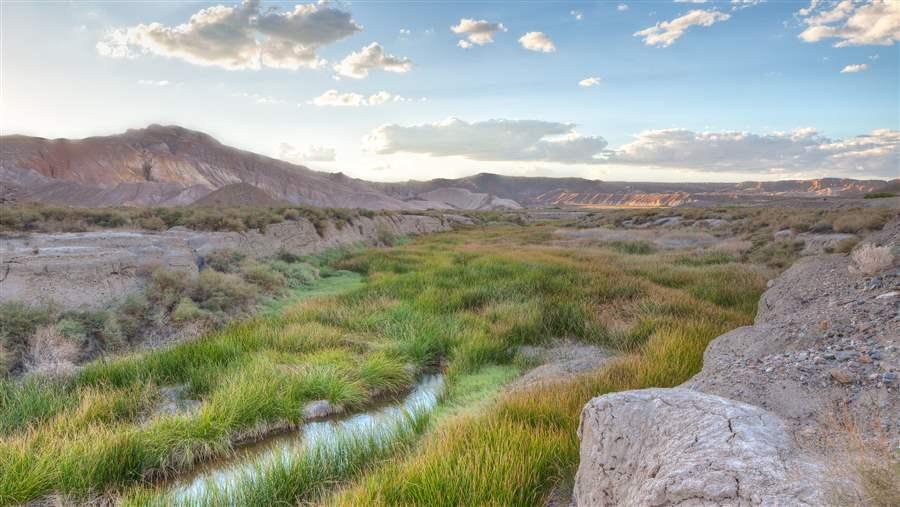 As it flows through the desert—underground for long stretches before surfacing—the Amargosa River provides harbor for many rare species, including the Amargosa vole, least Bell’s vireo, southwestern willow flycatcher, and Amargosa pupfish.

A Wild and Scenic River designation would help safeguard Deep Creek and the Whitewater River in and near the San Bernardino National Forest, and the Amargosa River and Surprise Canyon Creek near Death Valley National Park. 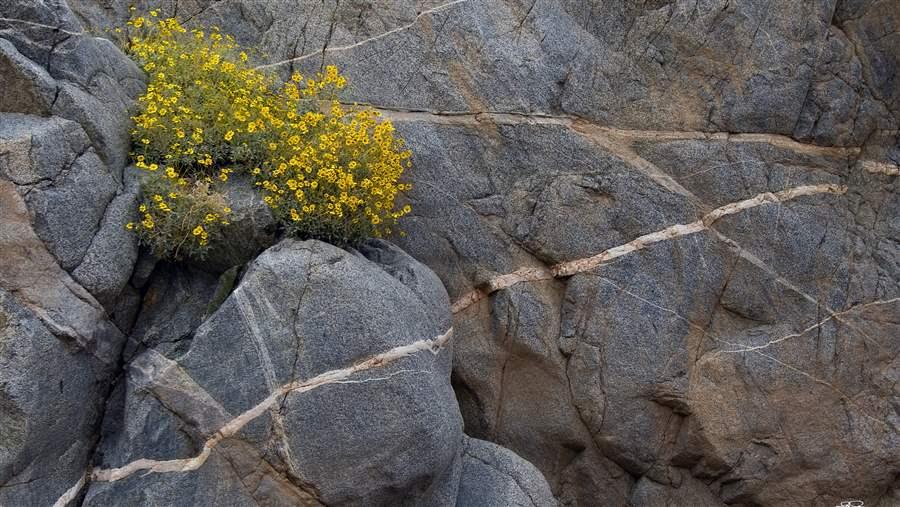 California’s desert wildflowers in bloom, such as this brittlebush in the Avawatz Mountains, attract visitors from around the world.

3) Economic benefits of recreation and tourism

Nonmotorized recreation on Bureau of Land Management lands, such as hunting and rock climbing, generated $329 million in California in 2014 (the last year for which complete data are available) and supported 2,600 jobs. 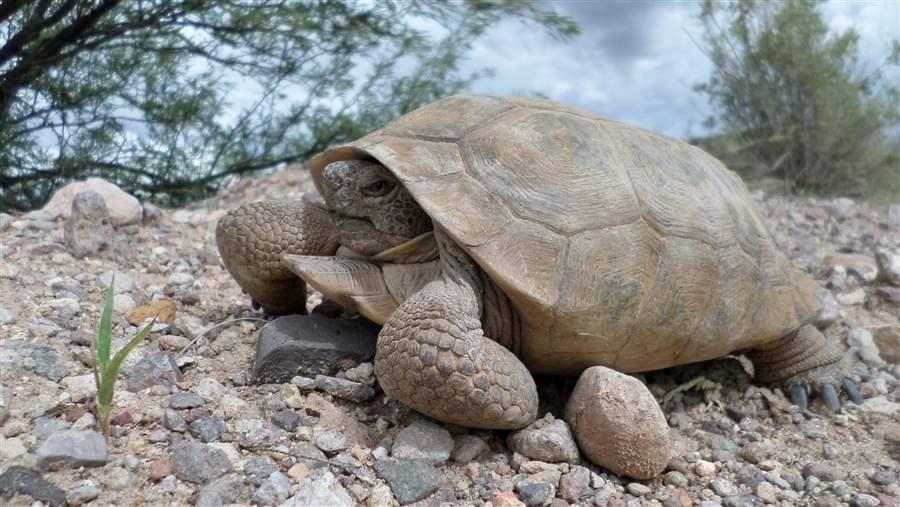 Desert tortoises, which can live up to 80 years, have experienced significant population declines in the southern portion of the Soda Mountains—now part of the BLM’s Desert Tortoise Recovery Plan.

Many wildlife species, such as the rare Inyo brown towhee and the threatened desert tortoise, depend on the California desert’s unique landscape. Biologists have identified the Avawatz Mountains as a regional habitat connection, which allows wildlife to move across the desert. 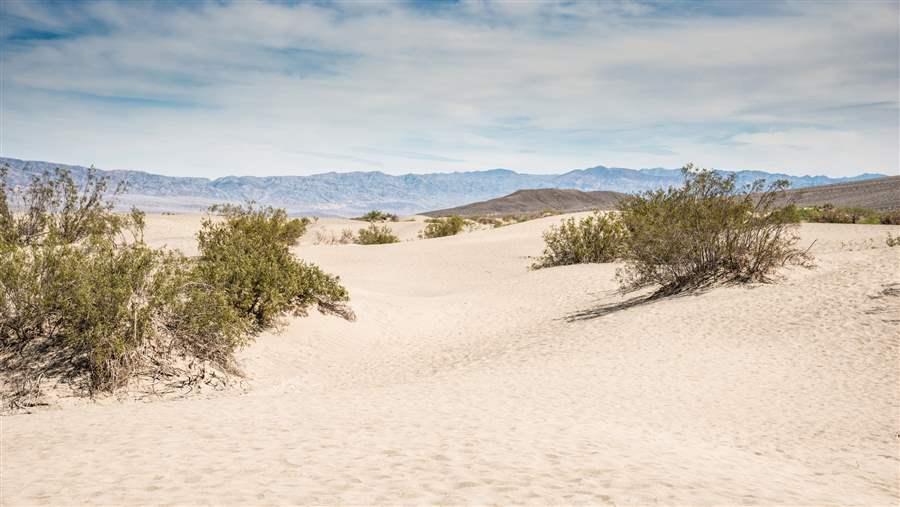 Mesquite trees in the desert signal the current and historical presence of Native Americans. The Timbisha Shoshone people continue the harvesting traditions of their ancestors, collecting the trees’ fallen pods to boil, roast, or grind into a sweet flour.

5) Billions of years of history

The earliest human inhabitants appeared in the California desert about 5,000 years ago, but the geological history of the Bowling Alley area, south of Death Valley National Park, dates back nearly 2 billion years.