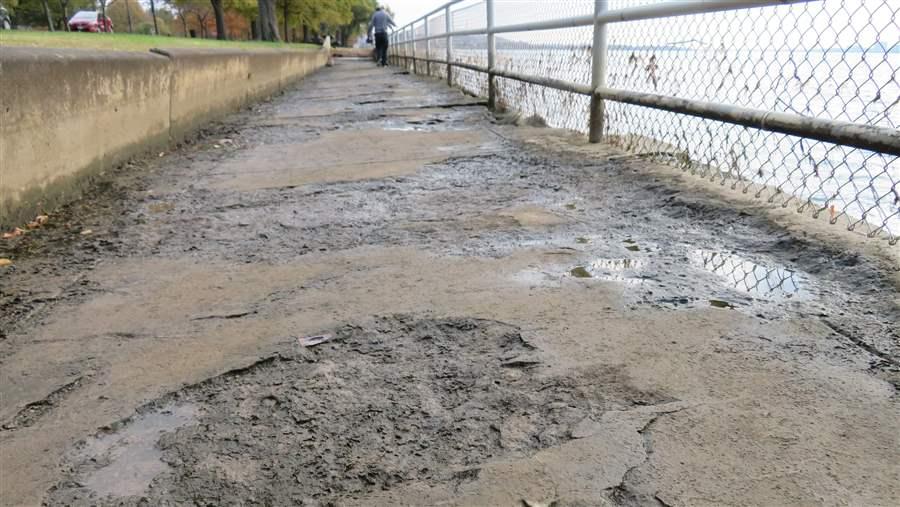 Along the Potomac River, not far from where U.S. presidents take the oath of office, a sidewalk and seawall in East Potomac Park are crumbling. That park has more than $341 million in backlogged repairs.

By almost any measure, the celebration and recognition of the National Park Service’s 100th anniversary last year was a success. More than 300 million visitors experienced at least one of the 400-plus NPS sites during the centennial year, including President Barack Obama and his family, Oprah Winfrey, and other luminaries, along with the millions of less well-known Americans, many of whom were drawn by the agency’s call to #FindYourPark.

But lost in this campaign was the critical need to #FixOurParks.  Scores of those visitors encountered crumbling roads, eroding trails, rotting historic buildings, failing or outdated sewer, water, and electrical systems, and damaged memorials—all among an NPS infrastructure maintenance backlog estimated at $12 billion.  Many of the repairs have been known and neglected for years because Congress has not allocated the necessary funding to make the fixes.   In fact, from 2006 to 2015, the NPS primary budget for construction and maintenance has decreased by approximately one-third.

Sites with backlogged maintenance needs include natural wonders such as the Grand Canyon, along with sites such as the Statue of Liberty, Ellis Island, the Martin Luther King Jr. National Historic Site in Atlanta, and the Gettysburg battlefield. These places preserve our nation’s rich and often turbulent history, teaching the young and reminding the old of the sacrifices our forebears made to shape the United States.

As the new Congress and President-elect Donald Trump begin their terms, it is important that they support investments in our park infrastructure to ensure that our national treasures are preserved for future generations.  That should start with including, in any infrastructure initiative, robust provisions to address national park maintenance.   Congress also needs to provide dedicated annual funding to the NPS to fix our parks. Further, elected leaders should explore opportunities to leverage public-private partnerships and innovative use of technology to keep the backlog from growing.

Our National Park System plays a critical role in preserving our landscapes and cultural treasures, and documenting our nation’s history, yet the NPS is entering its second century struggling to take care of overdue repairs. All Americans should view this as unacceptable.

Please read this opinion editorial in The Hill newspaper to learn more about why Pew is joining with people across the country in asking Congress and the new administration to fix our parks.