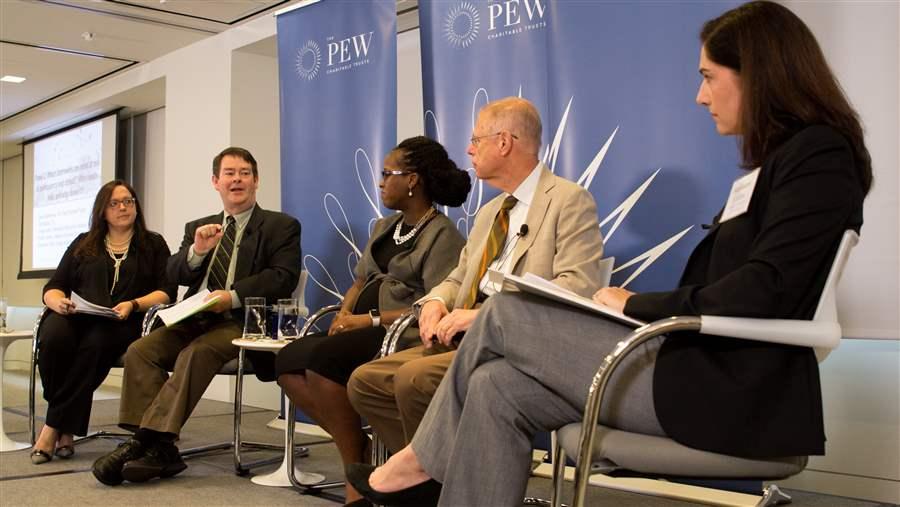 Although education continues to be a key driver of financial security, student debt is a substantial liability for many Americans and a growing concern for policymakers at all levels of government. Many borrowers successfully repay their loans and reap the financial benefits of postsecondary education, but a significant share is struggling to meet these obligations: The Consumer Financial Protection Bureau estimates that more than 1 in 4 student loan borrowers—10.5 million people—is delinquent or in default.

The Pew Charitable Trusts hosted a series of discussions in October on student loan repayment, which populations have the most difficulty, and what legislative and regulatory reforms could provide relief. This discussion highlighted areas of agreement and disagreement among experts on the best strategies to help borrowers at greatest risk of delinquency and default, and flagged areas for further research and analysis.

Panelists consistently expressed concern that the conventional wisdom on who is struggling the most with student debt should be revised. For example, borrowers with the highest balances don’t necessarily have the most trouble repaying, while many of those with volatile finances, as well as students of color and those who owe the least, such as borrowers who do not graduate, may be particularly at risk of negative outcomes. They also agreed on the need for more data to determine where loan servicing and repayment breakdowns occur, fewer and simpler repayment plans (though panelists noted that these also could be flawed), enforceable standards for loan servicers, and incentives for servicers and schools that align with successful repayment by students.

However, disagreement and uncertainty emerged regarding the best ways to improve outcomes. In the weeks and months ahead, new research by these and other experts will shed light on how to substantially reduce the number of students who are struggling with repayment.

Why do some borrowers struggle to repay?

The first panel of the day featured Susan Dynarski of the University of Michigan; Sandy Baum of the Urban Institute; Deanne Loonin, attorney and advocate for student loan borrowers; and Sarah Ducich of Navient, a student loan servicer; and was moderated by Danielle Douglas-Gabriel of The Washington Post. This group began by identifying which populations face the greatest difficulty repaying and are most at risk for delinquency and default. Dynarski and Baum suggested that policymakers and researchers should focus on low-balance borrowers, many of whom do not graduate and enter and exit postsecondary education with low earnings, rather than on those with high debt that often corresponds to high future earnings. Low-income, low-balance borrowers often have inconsistent and unpredictable earnings, and Loonin pointed out that these groups may also struggle with other bills and financial obligations, all of which can make repayment a challenge.

Members of all three panels indicated that the repayment options available are diverse and complex, and may be overwhelming. For example, borrowers must opt in to income-driven repayment (IDR)—a set of plans in which monthly payments are based on borrower income and debt is forgiven after 20 to 25 years using a complicated and lengthy form—and although those who choose this option are required to recertify their income each year, many fail to do so successfully, which can lead to increased payments when these borrowers are removed from IDR.

Dynarski proposed overhauling the current repayment system by automatically enrolling new borrowers in an IDR plan and using electronic payroll deductions to adjust monthly payments in real time as borrowers’ incomes change. The other panelists agreed that IDR and auto-IDR were promising options, especially for borrowers in distress, but Loonin noted that automatic repayment could prioritize student debt over other financial obligations and may not support legally justified nonpayment.

In contrast to the perspectives offered by the first three panelists, Ducich offered a loan servicer’s point of view on the repayment system. Although she acknowledged that many borrowers struggle for various reasons to repay their loans, she noted that when borrowers maintain contact and work with their servicers to identify appropriate repayment options, that is often enough to keep them from defaulting. However, Loonin indicated that the quality of interactions with servicers can be inconsistent and that once borrowers default, they are transferred from their servicers to a collections specialist and often have difficulty navigating a new set of options for becoming current on their loans.

Which borrowers are most at risk of delinquency and default?

The second panel—Jeff Webster of TG; Fenaba Addo of the University of Wisconsin, Madison; Walter Ochinko of Veterans Education Success; and Stephanie Cellini of George Washington University; and moderator Sarah Sattelmeyer of Pew—discussed the unique challenges nontraditional students, communities of color, veterans, attendees of for-profit schools, and others face. Webster began the conversation by describing the need for targeted, robust student loan counseling that incorporates the perspectives of both financial aid and academic advisers to help these borrowers navigate the repayment system, particularly those who do not graduate in four years, are older, or have family or work obligations. He indicated that many students decide whether to take out student loans with “minimum understanding at a time of maximum distraction.”

Addo added that communities of color face unique challenges in repaying their student loans. Her research and that of others demonstrates that African-American students rely on loans more than whites, have higher debt burdens, are more concerned about repayment and affordability, and are more likely to default. She echoed calls from the first panel to look beyond student debt and consider borrowers’ entire balance sheets.

Cellini then outlined her research on students attending for-profit schools, which disproportionately serve nontraditional students, minorities, and veterans. Despite a recent dip, enrollment in for-profit universities has more than tripled in the past 10 to 15 years, and for-profit attendees borrow more often than community college students, borrow larger amounts, and are more likely to default. Moreover, Cellini noted that students who attend for-profit schools are not necessarily experiencing the same post-college earnings bump as their peers, which can affect their ability to repay. She highlighted the need to think critically about the incentives for-profit schools receive for enrolling students and supporting their post-college success, the value that for-profit degrees return in the workforce, and the role of these institutions in the higher education landscape.

Ochinko discussed the loan challenges facing student veterans, particularly that many are nontraditional and minorities or may have health problems that affect their education. Although veterans graduate at the same rate as other students, they are more likely than their peers to enroll in for-profit schools, and many borrow to attend school even though they have access to generous GI Bill benefits. According to Ochinko, some veterans have also reported having student debt they didn’t authorize.

What solutions can help at-risk borrowers?

The final panel—Pauline Abernathy of the Institute for College Access and Success, Seth Frotman of the Consumer Financial Protection Bureau, Jason Delisle of the American Enterprise Institute, and moderator Travis Plunkett of Pew—examined repayment solutions in greater detail. Abernathy began by providing an overview of income-driven repayment programs, which are used by 20 percent of student loan borrowers. She noted that these plans make a substantial difference for many struggling borrowers; enrollees have lower levels of delinquency than other groups, though she cautioned that servicing breakdowns and the complexity and number of plan options are problematic. Despite these concerns and in light of the benefits these plans can provide to those at risk of delinquency and default, she pointed to the proposed federal Streamlining Income-Driven, Manageable Payments on Loans for Education (SIMPLE) Act, which would automatically enroll severely delinquent borrowers in IDR plans and automate the annual income recertification process, as a possible solution to many repayment challenges.

Frotman expanded on Abernathy’s call for servicing improvements, observing that breakdowns, such as delays, mistakes, and inconsistencies in processing paperwork and payments affect all types of borrowers and can prevent them from successfully enrolling and re-enrolling in IDR. He also cited the need for a wider focus: Borrowers may be struggling financially overall, not only with student loans.

Delisle, however, questioned whether IDR plans offer an optimal path for repayment. He suggested that existing programs are complex and disproportionately benefit high-balance borrowers because repayment is not based on the amount borrowed. He proposed an alternate system, one championed by former Florida Governor Jeb Bush (R) during his recent presidential campaign, that would require borrowers to pay back 1 percent of their income for every $10,000 borrowed from the federal government (up to $50,000) on their income taxes every year for 25 years or until they repaid 175 percent of the original principal. In response, Abernathy underscored the importance of IDR for low-balance borrowers, and Frotman pointed to the need for data, stating that the lack of information on IDR plans can make it difficult to understand whether they are working as intended.

Sarah Sattelmeyer is an officer and Brian Denten is an associate with The Pew Charitable Trusts’ financial security and mobility project.

A panel discussion about affordable repayment and family financial security

Education continues to be a key driver of financial security for many American households. Research has repeatedly shown that a college degree has a direct impact on upward economic mobility, particularly for those raised at the bottom of the income ladder. However, student debt is a growing burden for many families, causing concern for policymakers at all levels of government.

Pew’s financial security and mobility project hosts events to keep the media, policymakers, and practitioners up to date on the latest research and data related to family finances.

Pew&rsquo;s financial security and mobility project hosts events to keep the media, policymakers, and practitioners up to date on the latest research and data related to family finances. See below for information and resources on upcoming and past events.