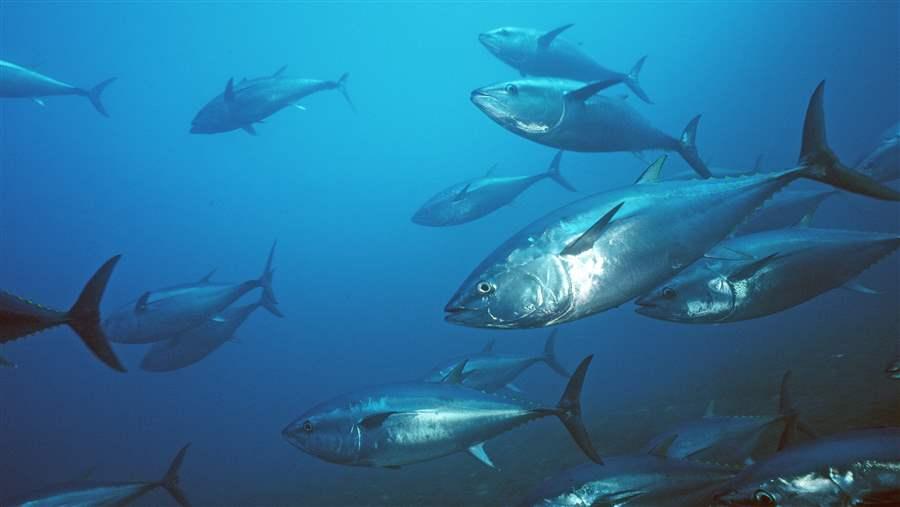 At the beginning of each year, the legendary Tsukiji fish market in Tokyo hosts an increasingly sad spectacle: the first auction of the season for one of the last remaining Pacific bluefin tunas.

In previous years, a single fish has sold for hundreds of thousands of dollars. In 2013, bidding reached a record $1.76 million. Pacific bluefin are prized as high-quality sushi, but the widely publicized auction and media accounts tend to obscure the true state of the species. Already depleted by more than 97 percent from historic levels, this tuna is being fished at rates up to three times higher than scientists say is sustainable.

The regional fisheries management organizations (RFMOs) tasked with overseeing the species, the Western and Central Pacific Fisheries Commission (WCPFC) and the Inter-American Tropical Tuna Commission, have not taken sufficient action to protect or rebuild Pacific bluefin, meaning its days as an economically viable fishery may be numbered.

In July, The Pew Charitable Trusts called for a two-year moratorium on commercial fishing of Pacific bluefin. A suspension of fishing would immediately end overfishing and give time for the RFMOs to implement management measures that would rebuild the stock to healthy levels. Since then, 12 other nongovernmental organizations (PDF) have joined the call, including Earthjustice, Greenpeace, Mission Blue, the International Game Fish Association, and the Safina Center. Fifty-eight scientists (PDF) have also signed on to a letter urging action and making clear that the species will continue to decline if managers don’t follow scientific advice.

The public has also spoken up: To date, more than 22,000 people have written to the U.S. National Oceanic and Atmospheric Administration, urging the agency to institute a ban on bluefin fishing in American waters and to encourage other nations to do the same. The U.S. government is determining whether it should list the species under the Endangered Species Act, which would bring new protections as well.

At the December meeting of the WCPFC, no action was taken to protect Pacific bluefin, but new momentum emerged for conservation as an increasing number of countries spoke up in support of stronger measures in 2017. Although it is encouraging to see acknowledgment that the species is in trouble, Japan and other top fishing nations need to take the lead on changing course.

The annual Pacific bluefin auction in Tokyo is an important event for the fishing industry in Japan, but high prices for a single fish shouldn’t distract from the urgent need to conserve the species. Only further international protections will ensure that the Pacific bluefin population will be rebuilt, leading to a sustainable future for the species and for the fishermen who depend on it for their livelihood.