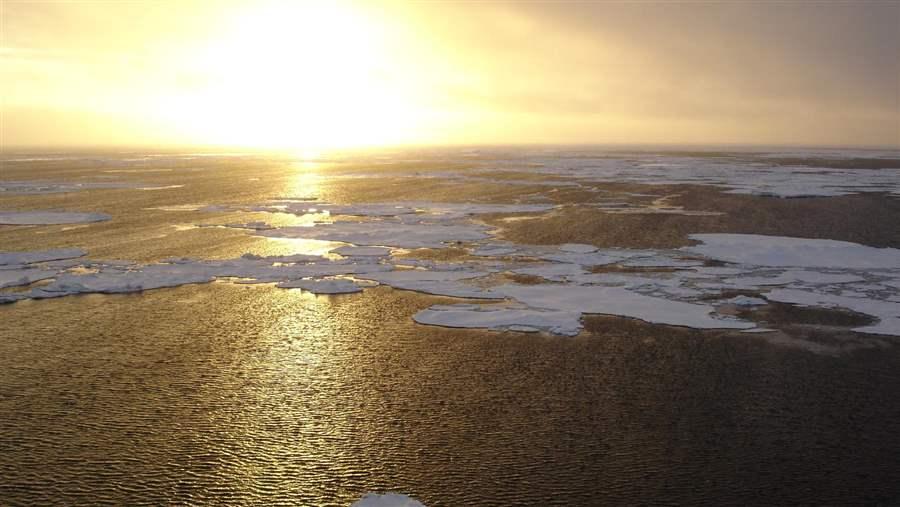 In recent summers, as much as 40 percent of the Central Arctic Ocean has been open water as sea ice melts.

At an early December meeting in Torshavn, Faroe Islands, officials from 10 Arctic and non-Arctic countries continued discussions on a binding international accord to protect the 1.1 million-square-mile Central Arctic Ocean from unregulated fishing as climate change melts the permanent ice cap. Once finalized, the agreement is expected to prevent commercial fishing in these waters until scientific research and management measures can ensure sustainable fisheries that do not damage fragile Arctic ecosystems.

Representatives from five Arctic coastal countries—the United States, Canada, Russia, Denmark, and Norway—as well as Iceland; major fishing nations such as South Korea, China, and Japan; and the European Union attended the meeting. This was the fourth negotiation in the past year, and attendees built on the progress made at the sessions in Washington in December 2015 and April 2016, and in Iqaluit, Nunavut, Canada, in July. The next meeting will probably take place in Iceland in March.

In a chairman’s statement released after the meeting, U.S. Deputy Assistant Secretary of State David Balton said he’s optimistic a deal can be reached. “Delegations made good progress in resolving differences of view on a number of the main issues under discussion. … There was a general belief that these discussions have the possibility of concluding successfully in the near future.” The statement went on to outline the remaining work: “Some of the key points that remain under discussion for the future include: the manner in which the agreement addresses exploratory fishing; the conditions under which a decision might be made to commence negotiations on an agreement to establish one or more additional regional fisheries management organizations or arrangements for the central Arctic Ocean; and decision-making procedures.”

For more than five years, The Pew Charitable Trusts has worked with government officials, scientists, the fishing industry, and indigenous leaders to support an international agreement that would protect the high seas of the Arctic Ocean, which are opening to industrial activity for the first time in human history as sea ice melts. In recent summers, as much as 40 percent of the Central Arctic Ocean has been open water. Although commercial fishing hasn’t started in the region, the pressure to do so is sure to increase with growing global demand.

In 2012, Pew released a letter signed by more than 2,000 scientists describing the need for additional scientific research before commercial fishing starts in the Central Arctic Ocean. Two years later, the Inuit Circumpolar Council—representing Inuit from Canada, Greenland, Chukotka (an autonomous district of Russia), and Alaska—called for a moratorium on commercial fishing in this region until adequate scientific research and sustainable management rules were in place and full consultations with Inuit had been conducted.

Then, in July 2015, the Arctic countries agreed not to allow their fleets to fish in the region and signed a nonbinding declaration that paved the way to broader negotiations including non-Arctic countries with major fishing interests.

U.S. leadership on this issue has stemmed from an unusual alliance of Alaska’s commercial fishing industry, Alaska Natives, and environmental organizations that agreed in 2009 that U.S. Arctic waters should be closed to commercial fishing until additional science indicated it could be conducted sustainably. Before that, Alaska Republican Senators Ted Stevens and Lisa Murkowski had introduced a joint resolution calling on their country to pursue a similar approach in international Arctic waters, which was passed by Congress and signed into law by President George W. Bush in 2008. Under Presidents Bush and Barack Obama, the U.S. State Department convened a series of negotiations with Arctic countries that eventually expanded to include major fishing.

The Arctic has long been a place where humans need to cooperate in order to survive and thrive. The effort to reach an international fisheries accord reflects a remarkable consensus among Arctic and non-Arctic nations that urgent action is needed to protect the fragile food web of the world’s last emerging ocean.