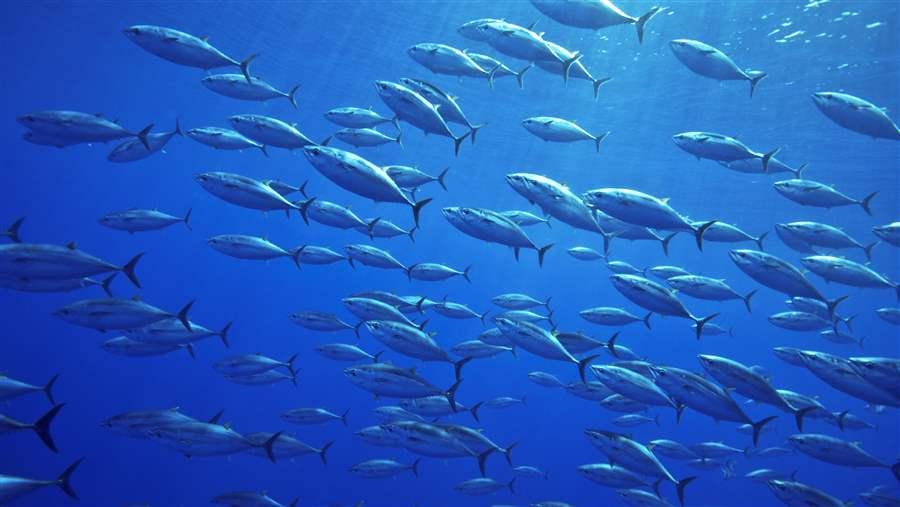 Unfortunately, the International Commission for the Conservation of Atlantic Tunas (ICCAT) voted to once again increase the eastern bluefin quota above the level recommended by scientists.

The outcomes of ICCAT’s annual meeting in Vilamoura, Portugal, Nov. 14-21, demonstrate that although the path has been set for improved management of some of the world’s most valuable fisheries, real commitment to critical change remains weak. More work and political leadership are needed to turn the Commission’s aspirations into reality.

Traditional fisheries management is generally a two-step process: Scientists prepare a stock assessment, and then managers negotiate catch limits based on the results and scientific advice. Too often, however, ICCAT members have put too high a priority on safeguarding short-term fishing opportunities, and that has led to overfishing, depletion of fish stocks, and, ultimately, a loss in long-term fishing opportunities and revenue.

Recognizing the need for an improved approach, member governments agreed at the meeting on a timeline to move from traditional management to a new system known as harvest strategies. Under this system, ICCAT members will first negotiate long-term objectives for each managed stock, and then set or “pre-agree” on actions to be taken to ensure that the objectives are met, or, if a stock declines to unsafe levels, what steps will be taken to swiftly reverse course.

Ultimately, this approach will improve fisheries management by making it more predictable. This process will establish the foundation for more stable and profitable fisheries, while restoring fish stocks to healthy biological levels or maintaining such levels.

ICCAT agreed to timelines for implementation of harvest strategies for eight key stocks, including a 2018 deadline for Atlantic bluefin. That is a promising sign that the Commission is modernizing its approach and bolstering its commitment to sustainable fisheries. The true test, however, will be whether the deadlines to honor this commitment will be met.

Atlantic bluefin tuna is one of most iconic and valuable tuna species in the Atlantic. For many years, ICCAT’s quota for bluefin in the eastern Atlantic and Mediterranean far exceeded scientific advice. That led to a dramatic population decline and to increasing calls for a trade ban because of concerns about poor management of the stock. In response, ICCAT decided to set catch limits for 2010 in line with scientific advice, resulting in growth of the eastern bluefin stock. So it was noteworthy that independent reviewers praised ICCAT this year for progress made in the area of bluefin tuna management.

Unfortunately, shortly after receiving this praise, ICCAT voted to once again increase the eastern bluefin quota above the level recommended by scientists. While we hope this increase will not undermine further recovery of the stock, the Commission has demonstrated it is still willing to make risky decisions to meet demands from fishing interests.

In addition, ICCAT failed to adopt measures to address the continued decline of Atlantic bigeye tuna, which continues to be overfished and experience overfishing, despite adoption of a new management plan last year. Increasing use of fish aggregating devices (FADs) in the Atlantic continues to result in high levels of bigeye juvenile mortality.

Poor management of FADs persists within ICCAT waters, despite the harm to the stock and the impact on commercial fisheries that target bigeye. Although a large number of ICCAT parties, industry members, nongovernmental organizations, scientists, and independent experts voiced concerns, ICCAT took no immediate action to reduce the mortality of bigeye tuna.

Member governments did, however, vote to continue ICCAT’s FAD Working Group and expand its mandate to directly consider the devices’ impact on juvenile mortality of bigeye tuna as well as measures to reduce that impact. Recommendations from this group should be an important part of next year’s agenda.

Sharks are apex predators and therefore critical to ocean ecosystems, but according to one estimate about 100 million are killed each year in commercial fisheries. Although targeting blue sharks and shortfin mako sharks in ICCAT waters is allowed, there are no management measures in place to ensure sustainability of these fisheries.

At this year’s meeting, member governments discussed a proposal to establish a precautionary catch limit for blue sharks, but then weakened the measure as the meeting progressed. Moreover, instead of taking action, they agreed that if catches in the North Atlantic surpass a specific level, the Commission will consider whether management action is necessary. This is another disappointing outcome for sharks that continues to raise questions about ICCAT’s ability to effectively and sustainably manage shark populations and associated fisheries.

Although ICCAT boosted its commitment to measures that could transform management of bluefin and bigeye tunas and strengthen its focus on increased sustainability, member governments still took a number of short-sighted actions. If anything, decisions to allow quotas to exceed scientific advice demonstrate the urgent need for a renewed commitment to science-based management. That will require adopting robust harvest strategies within the timeframe set this year in order to secure the long-term sustainability of valuable Atlantic fisheries.

Paulus Tak is a senior officer for Pew’s international ocean policy team and was head of delegation to this year’s ICCAT meeting.