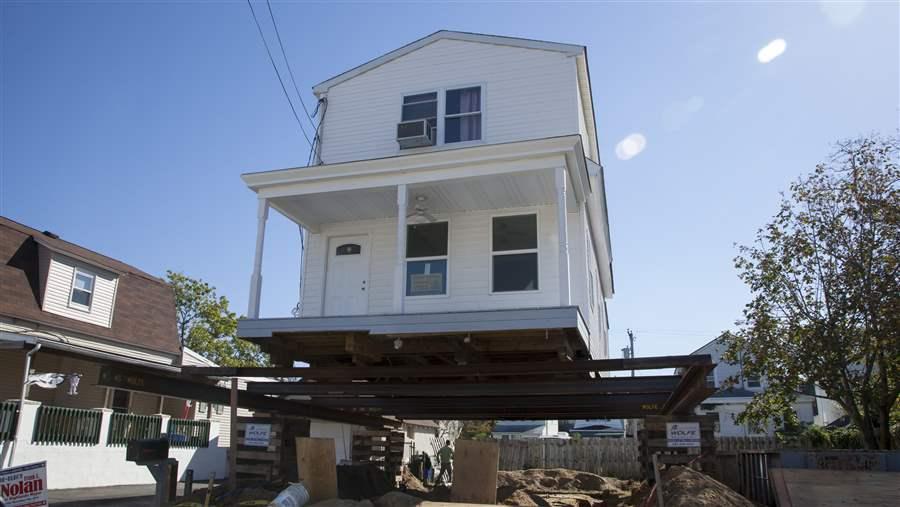 A house is raised from its foundation in Highlands, New Jersey, almost a year after Hurricane Sandy hit in 2012. Homeowners can elevate their properties to mitigate future flood damage.

Billion-dollar natural disasters used to strike the United States once or twice a year. But since 1980, such events have occurred five to 10 times annually. These catastrophes threaten public safety, disrupt daily activities, and lead to economic losses. In October, Hurricane Matthew left at least 24 dead and caused $6 billion in insured property loss when it hit the southeastern United States. As the numbers and costs continue to climb, homeowners, communities, and the federal government will be challenged to make wise financial investments that will help save lives and lower the costs of future storms.

Research by an independent group of experts in 2005 found that every dollar invested in mitigation results in $4 saved. Take, for example, Missouri. Publicly funded buyouts of flood-prone properties saved nearly $100 million from avoided losses in 2008, a 212 percent return on investment. And the insurance company FM Global, which helps commercial property owners prepare for hurricanes, calculated that its clients sustained eight times less damage on average than those who didn’t follow its loss-prevention advice during Hurricane Katrina. Companies that spent $7,400 on risk improvement before Katrina avoided an average $1.5 million in losses. There’s no doubt that investing now will pay dividends.

Yet a 2016 report by the Government Accountability Office (GAO) found that of the $277.6 billion that the federal government spent on disaster assistance from fiscal years 2005-14, the Federal Emergency Management Agency (FEMA) designated less than $600 million to the main federal program that helps communities mitigate the impacts of natural disasters before they happen.

Following the federal government’s example, states, localities, and even individuals have underinvested as well. Studies show that few property owners prepare for natural disasters. Only an estimated 10 percent of flood- and earthquake-prone households have taken mitigation measures. And according to a 2015 GAO report, many states likely rely on post-disaster federal funds to mitigate future risk instead of dedicating their own resources prior to disasters.

With tighter budgets and storms growing more frequent and intense, states and communities are experimenting with innovative approaches to raise awareness of risk, generate smarter investments, and shift resources to pre-disaster mitigation.

Here are a few examples of communities that are thinking creatively about financing risk reduction:

Federal policymakers are also seeking new ways to encourage and finance risk reduction measures. In February, a group of agencies led by FEMA and the Department of Transportation began developing a federal mitigation investment strategy to coordinate activities across the nation. The White House released a fact sheet in October that highlights actions by federal agencies to ensure that structures are designed and built to be resilient to natural disasters. Joseph Nimmich, FEMA’s deputy administrator, stressed the importance of taking such measures at a recent congressional hearing examining the cost of federal disaster response. “Mitigation efforts taken before disasters strike can significantly lessen their financial impacts on the nation,” he said in his written testimony.

It is critical for the nation to prepare before natural disasters occur in order to increase safety, protect property, and decrease costs. New financing mechanisms should be examined to encourage property owners, communities, and states to reduce risk. At the federal level, Congress must support increased investment in pre-disaster mitigation as well as in innovative strategies to help reduce costs and save lives in an era of catastrophic weather.