Deep below the ocean’s surface, our planet is exhaling. Its breath—methane gas—feeds some of the ocean’s smallest organisms, which form the foundation for vibrant underwater communities and play a key role in regulating the climate through their consumption of this potent greenhouse gas. Now, fishery managers have an opportunity to act to protect these remarkable ecosystems.

They are called methane seeps and are found in oceans around the world at depths of 650 feet to more than 11,000 feet; hundreds of seeps are now known to exist off the West Coast, where the Pacific Fishery Management Council is considering new protections for sensitive habitat. Among them are approximately 500 new seeps that scientists discovered off California, Oregon, and Washington during an expedition this summer aboard the exploration vessel Nautilus. The expedition was a collaboration between the Ocean Exploration Trust, which owns and operates the Nautilus and is led by the explorer and scientist  Robert Ballard, and the National Oceanic and Atmospheric Administration’s Office of Ocean Exploration and Research. 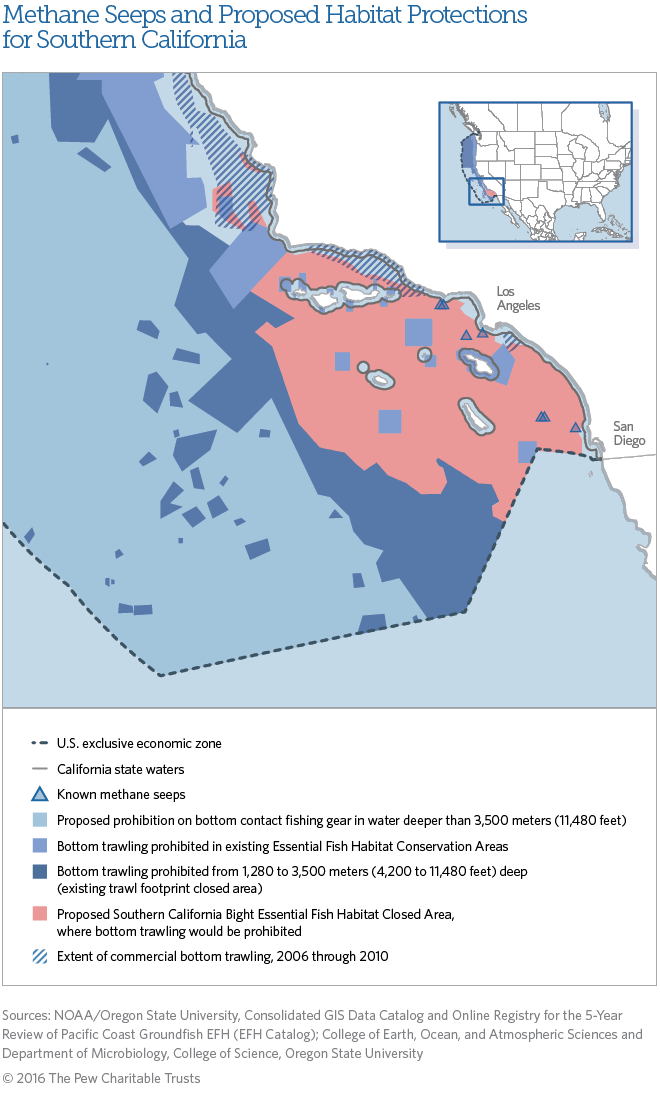 Microbes congregate at these openings, consuming the methane and producing bicarbonate (you may know it as baking soda) as a waste product, which combines with other minerals and hardens into a substrate of rock on the ocean floor. This becomes habitat for a suite of marine life, including deep-sea corals and sponges, and groundfish. The microbes also serve as food for organisms such as tube worms and clams, which in turn draw other predators and scavengers to these communities.

Because those microbes consume up to 80 percent of the seeping methane, they prevent the gas from reaching the ocean surface and releasing into the atmosphere, where it could contribute to global climate change.

Establishing the rocky substrate and coral habitat around a seep can take thousands of years, and just one pass of a weighted fishing trawl could seriously damage a seep community. Fortunately, the council is considering proposals that could bar trawl fishing on many of these newly discovered seeps along the coast. Scientists have found that they can locate seeps with a high degree of accuracy by using sonar to detect the methane bubbles rising through the water. Preliminary data from one area proposed for protection off southern Oregon revealed over 40 bubble streams, probably comprising approximately 20 new seeps within just 41 square miles; that survey covered only 25 percent of the area, suggesting more seeps might have been found with a more comprehensive study of the seafloor.

Also, fishing fleets aren’t yet working the areas around many West Coast methane seeps. Thus, protecting them now can safeguard a vibrant part of the ocean ecosystem without forcing fishermen off of their preferred grounds. A large proposed closure of unfished areas with seeps off Southern California, shown in the map above, is a good example of how fishery managers can do this.

The Pacific Fishery Management Council should act now to help protect our ocean—and the rest of our planet—by protecting methane seeps. Please take a moment to send a message to the council.