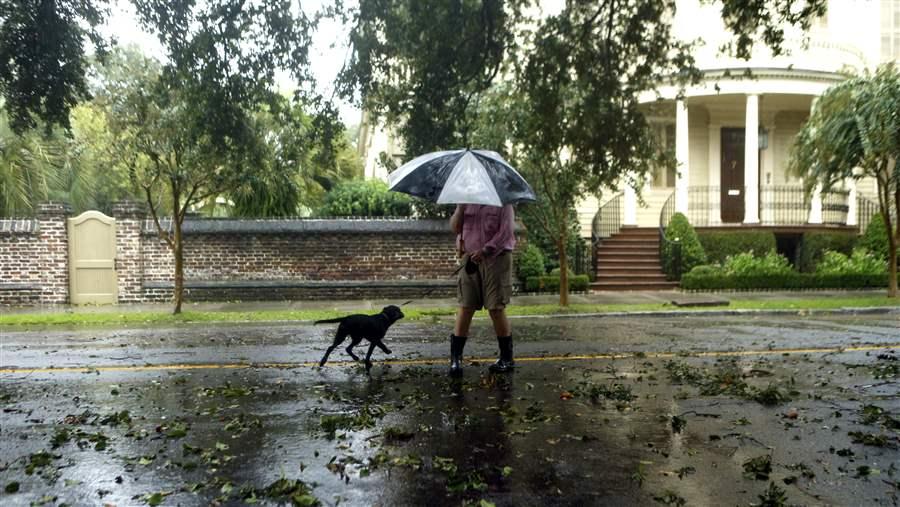 A Charleston, South Carolina, resident walks his dog amid fallen branches in the wake of Hurricane Matthew this month. Across the Southeast, more than 1.4 million people lost power in the storm, which hit South Carolina hard.

For 10 terms, beginning in 1975, Joseph P. Riley Jr. (D) served as mayor of Charleston, South Carolina. During his four decades in office, many extreme weather events flooded the historic southern city, which is bordered by two rivers and the Atlantic Ocean. In 1989, Hurricane Hugo, a Category 5 storm, tore through the city, claiming a dozen lives and causing more than $10 billion in recovery costs. At the time, it was the most destructive hurricane on record. Riley worked tirelessly to implement flood-management changes to better prepare the city for natural disasters, including smart urban design, major improvements to stormwater systems, and, in his final days as mayor, a comprehensive strategy to address sea-level rise in the city.

As a Pew Distinguished Fellow, Riley advises on policy measures, including disaster mitigation and natural infrastructure efforts that can protect people and property from extreme weather events. Laura Lightbody, director of Pew’s flood-prepared communities project, sat down with Riley after Hurricane Matthew swept through Charleston to learn more about his work to protect and prepare the city.

Q: Charleston is a charming and growing city renowned for its history, architecture, and culture, but it’s also low-lying, which makes it vulnerable to hurricanes, king tides, and sea-level rise. What have you done to make it better able to withstand floods and extreme weather events?

A: Charleston has embarked on a number of initiatives to make this city more sustainable and durable and to adapt to the changes that are already arriving with sea-level rise. We initiated measures that involved many disciplines in city government—from public safety to public service to emergency management—to assure critical response and preparedness.

Necessary reinvestment has been ongoing since 1984, when the city adopted its Master Drainage and Flood Plain Management Plan. This plan led to the creation of revenue streams, including participation from building owners, to help finance major drainage projects that have provided relief in many areas of the city, including the historic and low-lying peninsula and the large suburban areas that confront different flooding challenges.

Several projects have been completed and others are in phases of completion or design. To date, the city has spent or set aside more than $235 million to complete ongoing projects. 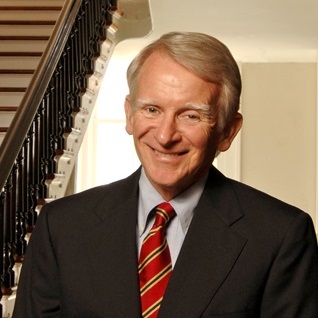 Q: Just before your retirement in January, you released a Sea Level Rise Strategy for Charleston that called for infrastructure improvements and processes to prepare for higher tides. What are some of the major recommendations?

A: Our Sea Level Rise Strategy is organized around a threefold approach: reinvestment, response, and readiness.

Planning—with a built-in mechanism to adapt early to unexpected changes in forecasts—is critical to a successful sea-level rise strategy. Major recommendations include planning for the next 50 years, using federal estimates. Fifty years is an understandable amount of time, and is in line with today’s best scientific projections about rising seas.

Continuing our stormwater drainage program is key for Charleston. The work done so far has allowed us to absorb the increased flooding caused by sea-level rise and weather microbursts.

Regularly updating this plan is critical to broadly understanding where a community’s greatest risk lies and allows time to study individual drainage areas. With that information, then, we can devise solutions to flooding problems and ensure that new development can occur in accordance with site-specific engineering of drainage plans that use green infrastructure where appropriate.

Q: What did Hurricane Matthew reveal about the work done already in Charleston and about what challenges the city is still facing?

A: Hurricane Matthew was a stark reminder of the relentless increase of the brutal effects of more frequent flooding events on our infrastructure and the quality of life in the city. The measures I talked about that we have taken in Charleston, especially the planning and drainage improvements made over the last several years, helped mitigate the damage from Matthew. And our well-organized emergency operations system worked superbly to protect the community, keep residents informed, and prevent loss of life or serious injury.

But reactive measures alone are not enough. We know this problem will increase, so only by working collaboratively across the national, state, and local levels will we be able to work to get ahead of it and manage its effects.

Q: How can this strategy be applied to cities around the U.S.? What is the federal government’s role in a strategy?

A: Sea-level rise strategies exist in several cities. New York and Newport News, Virginia, are two examples. Studying these and developing clear steps for a process would be helpful to communities across the United States and would allow each community to understand its own particular risks and create its own strategy. Also needed are tools to help with the prioritization and cost-estimation processes.

Only an effort led by the federal government will be optimally useful in helping cities develop and then execute sea-level rise strategies. Many departments of the federal government are now involved in one aspect or another of sea-level rise. FEMA [the Federal Emergency Management Agency] and the National Flood Insurance Program are critical, but a sea-level rise strategy must include many other agencies, such as the National Weather Service, Department of Transportation, and HUD [Department of Housing and Urban Development], to name a few.

One of our main goals has been to maintain a relationship with the scientific community, federal and state agencies, and local governments for the free and timely exchange of information on the impacts of sea-level rise to the city and region. We have an active leadership role in the Charleston Resilience Network, which encourages a regional response to sea-level rise.

Q: As the number of federal disaster declarations increases, how can we better prepare and protect communities?

A: In the face of natural disasters, communities need to do the best job possible to communicate risk and appropriate actions to our citizens. We need to provide them with the tools to take action to protect themselves and their property. Once the disaster arrives, communities need to be well-prepared to mobilize and bring in any aid that is needed.

Q: After a disaster, how can communities reduce future risk and rebuild infrastructure to better withstand the next extreme weather event?

A: When disaster strikes, an opportunity arises to learn and rebuild in a way that makes our communities stronger. Adopting and enforcing the most up-to-date building codes, evaluating our interface between the shore and the water’s edge, and having comprehensive emergency plans to retreat and evacuate when necessary are essential to protecting our cities and states.

Q: Recognition is growing that natural solutions can play a role in making communities more resilient. Do you think nature should be used in cities’ mitigation, adaptation, and risk management?

A: Absolutely! In our own community, we see places that are absorbing more tidal and flood water, whether it’s at the natural edge of a sloping waterfront park or it’s land that slowly over time is becoming marsh as the number of days that it is tidally influenced increases. In this planning, it is essential that the managers of these properties understand the multiple purposes of these public properties.

Q: What would you tell community leaders, mayors, and other elected officials who want to make their areas better able to withstand future weather events and the changing climate?

A: Plan, communicate the plan, and then adjust the plan as needed during its implementation. Encourage collaboration across departments within the city and across the region and state for innovative solutions that help the greatest number of people.