The Steamboat Creek watershed in the Umpqua National Forest lies a little more than 100 miles south of Eugene, Oregon, and provides clean drinking water, critical wildlife habitat, and world-class fisheries. The Frank Moore Wild Steelhead Sanctuary Designation Act would protect roughly 100,000 acres of land and water in the watershed for future generations to enjoy. Here are five reasons to protect this spectacular ecosystem.

Steamboat Creek is a tributary of the famed North Umpqua River, which flows across southwestern Oregon. The area proposed for protection provides drinking water to the surrounding community and would protect over 50 miles of rivers and streams. These clean waters sustain thriving wild salmon and steelhead populations, in addition to other wildlife. 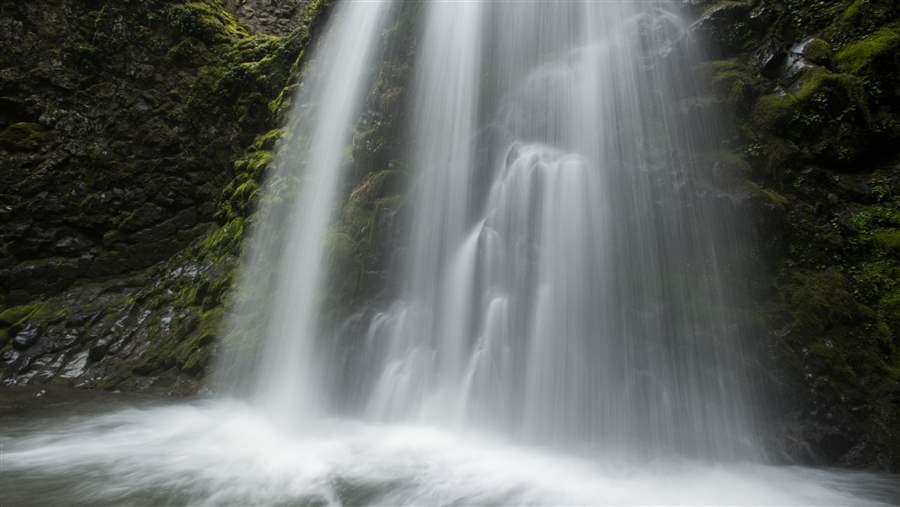 The Steamboat Creek watershed, punctuated by both still and roaring waters, is a “Tier 1 Key Watershed,” meaning it provides high-quality water for drinking and for sustaining aquatic life.

The Steamboat Creek area, which would be safeguarded by the Frank Moore Wild Steelhead Sanctuary Designation Act, contains some of the best wild steelhead spawning regions in the Pacific Northwest. It provides habitat for summer and winter steelhead, chinook and coho salmon, rainbow trout, and other native species. The robust fisheries draw anglers from near and far, and people come to watch the steelhead congregate in the natural Big Bend Pool during the summer. 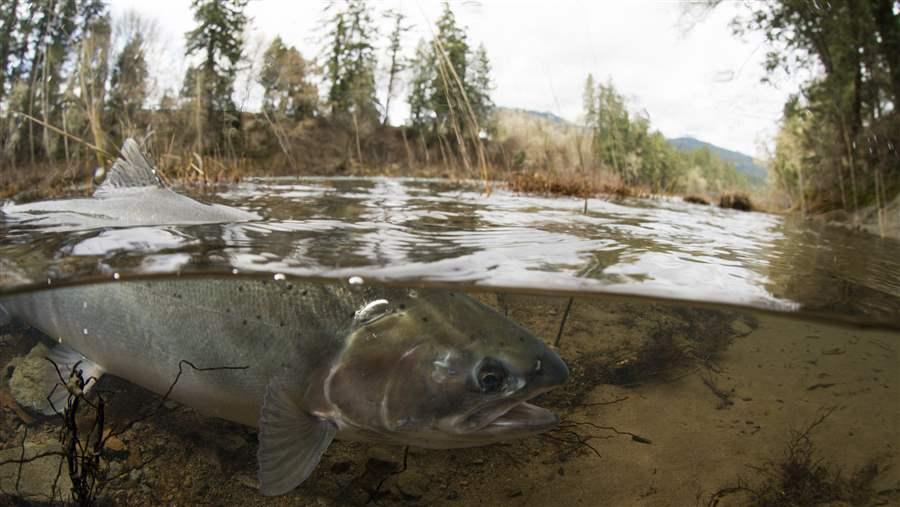 A steelhead trout drifts in the North Umpqua River.

The legislation is named for Frank Moore, a World War II veteran of the D-Day invasion of Normandy and legendary steward of the North Umpqua River. After the war, Moore found that fishing in the area and spending time in the great outdoors helped him cope with the memories of his wartime experiences. He established the
Steamboat Inn overlooking the North Umpqua River and guided trips on the water. 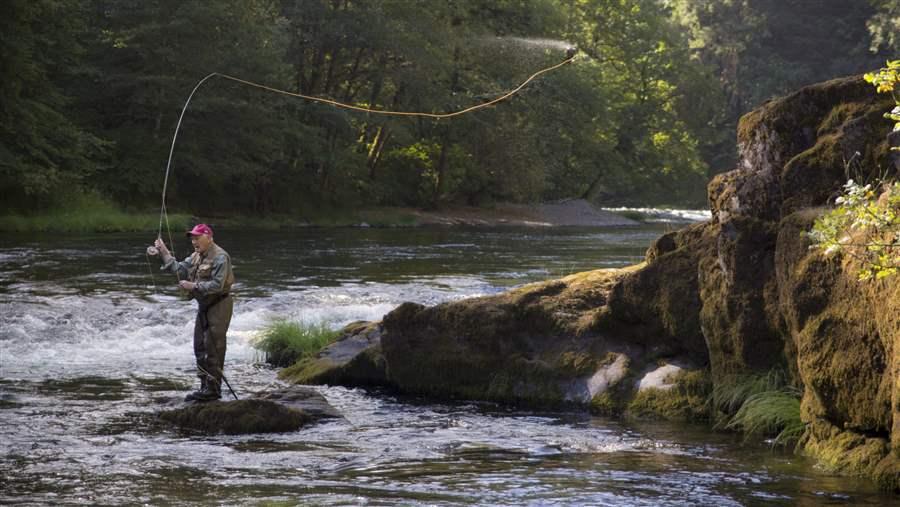 Frank Moore, seen fishing on the North Umpqua River, started the Steamboaters, a group dedicated to safeguarding the river.

Passing the Frank Moore Wild Steelhead Sanctuary Designation Act would benefit the local economy, as visitors from across the country and around the globe would come to explore and enjoy the area’s outstanding fishing opportunities. The Outdoor Industry Association found that outdoor recreation in Oregon annually generates
$12.8 billion in consumer spending, 141,000 jobs, $4 billion in wages and salaries, and $955 million in state and local tax revenue. 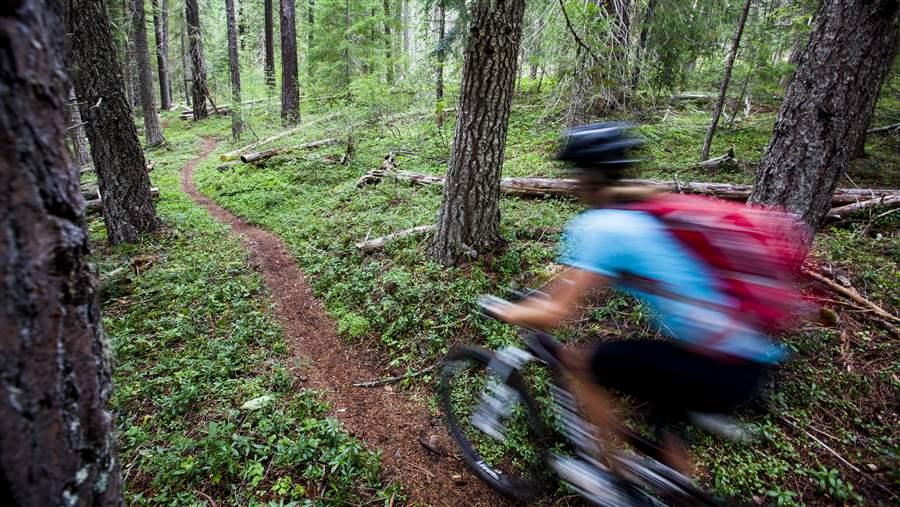 A woman bikes along the Umpqua River Trail.

The North Umpqua watershed is one of the most important ecological areas in the Pacific Northwest and among the last remaining West Coast strongholds for salmon and steelhead. The ancient forests that shade the river are part of the area’s unique ecosystem, creating a home for several endemic and rare species. The watershed provides habitat for black bears and river otters, bald eagles and northern spotted owls, Roosevelt elk, and grouse. 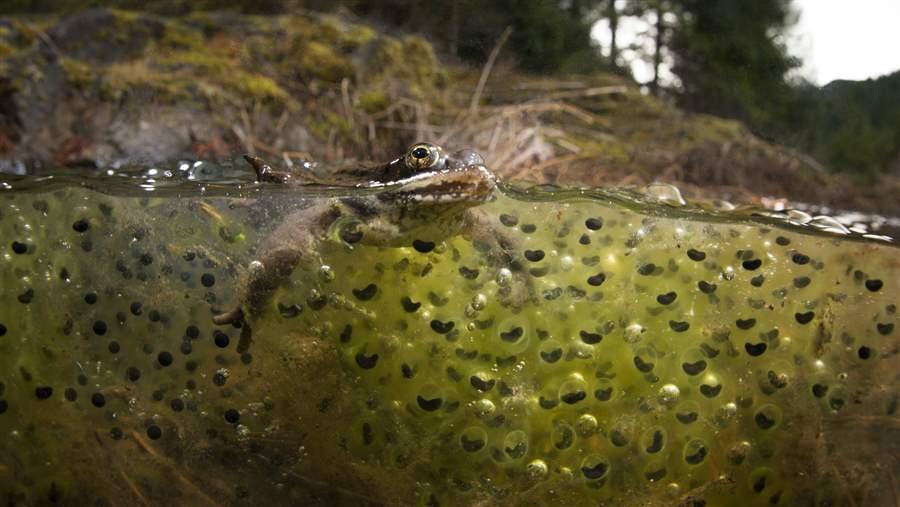 Amid a plethora of frog spawn, a northern red-legged frog floats the North Umpqua River.