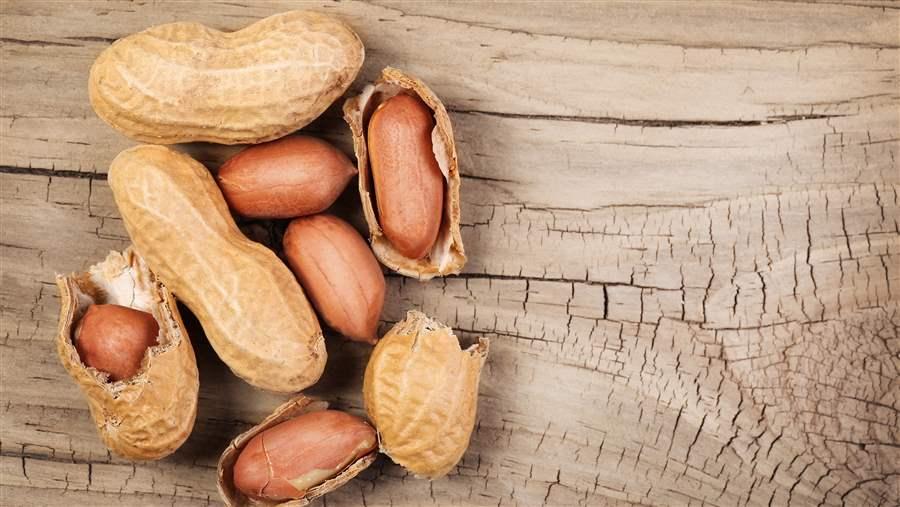 Drastic prices increases for epinephrine auto-injectors—used to treat severe allergic reactions, including to peanuts and bee stings—have generated outrage from both patients and policymakers.

People with life-threatening allergies have long relied on the EpiPen, an injection device that dispenses epinephrine, to reverse symptoms of severe allergic reactions. But steep price increases for the drug over the past decade—including a more than 100 percent increase in the past three years—have sparked outrage from consumers who now face sizable, and often unaffordable, out-of-pocket costs.

Federal policymakers have asked Mylan, the product’s manufacturer, to explain its pricing decisions, and the House Oversight and Government Committee initiated a formal investigation into the drug’s costs. Many policymakers have advocated for increased competition to drive down EpiPen prices. However, two versions of another epinephrine auto-injector on the market—Impax Laboratories’ brand-name Adrenaclick and a generic—have not lowered prices. In fact, the prices for all three products have increased significantly. 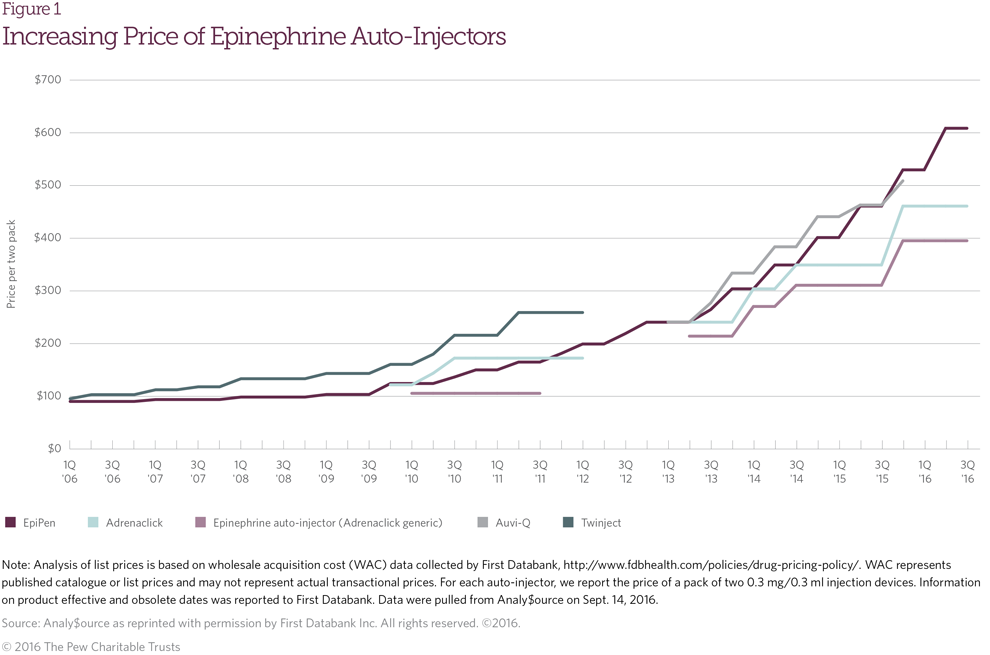 Over the past 11 years, the list price of EpiPen has increased 574 percent—from $90.28 in 2006 to $608.62 today. Since early 2014, EpiPen’s price has doubled. The price of the other available auto-injectors, including brand and generic versions of Adrenaclick, have also increased substantially since 2014—by 52 and 46 percent, respectively. (Importantly, these prices do not account for discounts or rebates the manufacturers provide to purchasers. But even with these discounts, prices have increased.)1

Notably, the Food and Drug Administration has determined that EpiPen and Adrenaclick are not therapeutically equivalent due to design differences.2 For this reason, states generally do not allow pharmacists to automatically substitute the lower-cost Adrenaclick for EpiPen without provider consent.3

Demand for epinephrine auto-injectors has also increased. The number of EpiPen prescriptions in the U.S. rose from approximately 2.5 million to more than 3.5 million between 2011 and 2015.4 The number of schools stocking the products has also risen.5 Mylan acquired EpiPen in 2007, when sales totaled $200 million.6 Today, sales exceed $1 billion,7 due in part to price increases, new state and federal policies, and changes in the auto-injector marketplace. For example, some states have passed laws requiring schools to stock epinephrine-delivery devices.8

EpiPen is approved by FDA.

FDA allows EpiPen to be marketed to anyone at risk for anaphylaxis.9 Previously, the auto-injector could be marketed only to patients with a history of anaphylactic reaction.

Brand and generic versions of Adrenaclick are launched in the U.S.10

A National Institutes of Health expert panel recommends that patients be prescribed two doses of epinephrine instead of just one.11

The generic version of Adrenaclick is discontinued.12

Shionogi, which had acquired both Twinject (launched by Verus Pharmaceuticals in 2005)13 and the branded version of Adrenaclick, discontinues both products.14

Mylan launches the “EpiPen4Schools” program, which offers free and discounted EpiPens to schools.15 Today, more than 65,000 schools receive free EpiPens through the program, while an unknown number purchase the injectors—which expire after 12-18 months—from Mylan every year at a discount.16

Both the brand and generic versions of Adrenaclick are re-launched into the U.S. market.19

The federal School Access to Emergency Epinephrine Act becomes law.21 It provides financial incentives for states to require schools to maintain an emergency stock of epinephrine and permit trained personnel to administer the drug during the school day. As of July, according to Food Allergy Research and Education (FARE), 49 states have laws or guidelines that either require or allow schools to stock epinephrine.22

Sanofi voluntarily recalls the auto-injector Auvi-Q after it is found to potentially deliver the wrong dosage.23

Teva discloses that it received an FDA rejection for its generic version of EpiPen due to “certain major deficiencies.”24 A launch of the product is not anticipated before late 2017 or 2018.25

EpiPen, along with brand and generic versions of Adrenaclick, are the remaining epinephrine auto-injectors available in the U.S.

Generics are just part of the solution

Generics typically save patients and the health care system money because they cost 15 to 20 percent of the brand drug they copy, with prices lowest when multiple generic options are available.26 Although EpiPen was first introduced in 1987, successive changes to the auto-injector have resulted in patent protections through 2025.27 However, under the provisions of a 2012 court settlement, Teva could have begun selling a generic version of EpiPen in June 2015 (or earlier, under certain circumstances), subject to approval by FDA.28 Nevertheless, with only a single generic competitor on the horizon, the effect of generic competition is likely to be limited—at least in the short term. Other generic developers would have to successfully challenge the EpiPen patents in court or, like Teva, settle with Mylan before they could bring a generic version of EpiPen to market.

Mylan has announced plans to release its own generic version of EpiPen for $300,29 which is equal to the price of the brand version two years ago. Other generic developers launching their products before 2025 are likely to set similarly high prices. For these reasons, policymakers who want to address the cost of epinephrine auto-injectors should not rely solely on the future availability of generics.

Competition from other auto-injectors, including Adrenaclick, has failed to drive down costs. To lower spending on epinephrine auto-injectors, policymakers could consider the following: