On August 26, 2016, President Barack Obama set a new standard for global conservation by announcing the expansion of the Papahānaumokuākea Marine National Monument to cover an additional 442,760 square miles (1.15 million square kilometers). Former President George W. Bush established the marine reserve in the Northwestern Hawaiian Islands in 2006. The enlarged borders mean Papahānaumokuākea covers four times as much area as when first designated and is now the world’s largest protected area on land or sea, at 582,578 square miles (1.5 million square kilometers).

The expansion adds waters with significant cultural and scientific value—from threatened marine species with historic links to Native Hawaiian communities to the remains of World War II’s Battle of Midway. Papahānaumokuākea’s waters host more than 7,000 species—a quarter of which are found nowhere else on Earth. That includes many that are threatened or vulnerable to extinction. The administration’s action guarantees the preservation of these gems for future generations. 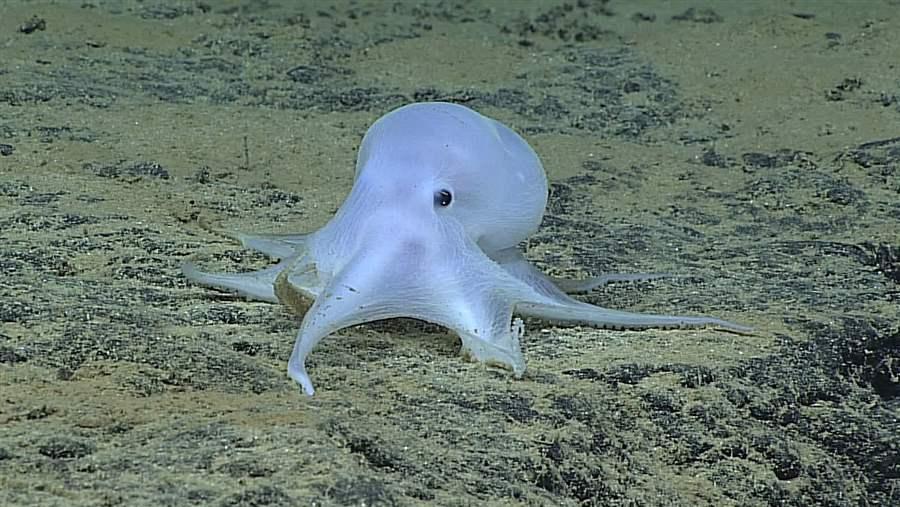 This ghostlike octopod—nicknamed Casper by scientists, after the friendly cartoon character—was discovered in Papahānaumokuākea on a 2016 expedition led by the National Oceanic and Atmospheric Administration’s Office of Ocean Exploration and Research. Scientific expeditions to the Northwestern Hawaiian Islands continue to lead to the discovery of new species of fish, invertebrates, and algae.

Hawaiian crews on traditional sailing canoes use a technique called wayfinding to navigate by observing the sun, moon, stars, and natural environment. The practice includes marking the sightings of migratory seabirds, leaping fish, and areas where marine life and birds are plentiful, and it depends on healthy ecosystems. 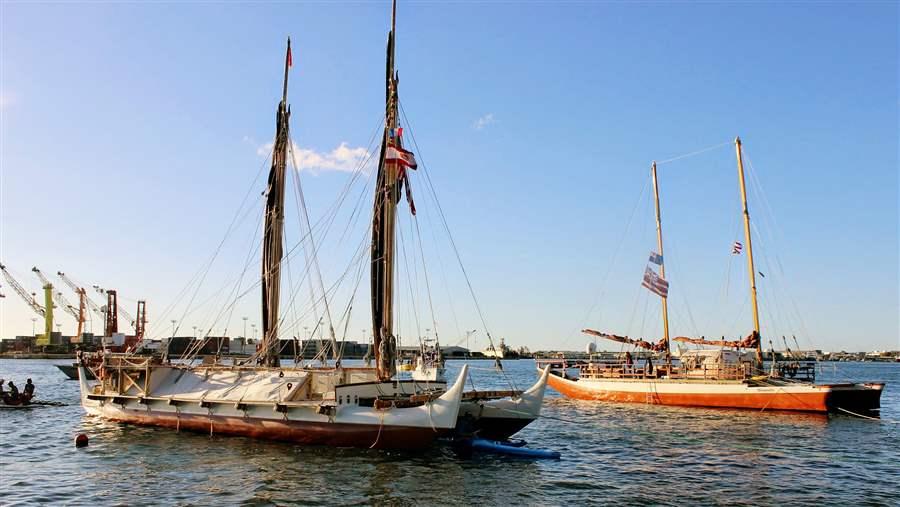 Papahānaumokuākea is the only intact ecosystem in the Hawaiian Islands and an important destination for those engaged in the ancient practice of Polynesian voyaging. The traditional, double-hulled seafaring canoes pictured—Hōkūle’a (left) and Hikianalia—departed Hawaii in 2013 for a four-year circumnavigation of the globe as part of a Polynesian Voyaging Society effort to promote sustainable stewardship of the natural world. 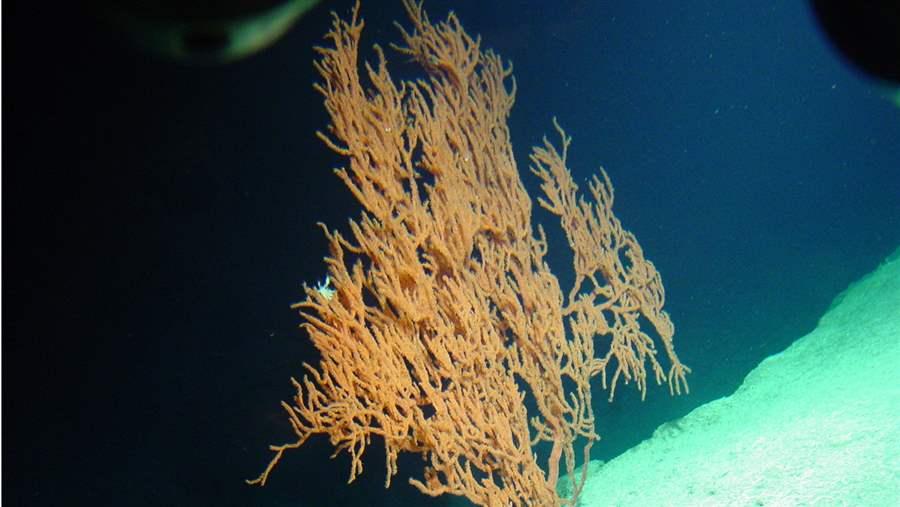 The world’s oldest living organism—the deep-water black coral Leiopathes annosa—is believed to be about 4,265 years old and is found exclusively within the waters of the Hawaiian Islands at depths of 305 to 488 meters (1,000 to 1,600 feet). The deep-water coral started growing around the time that the ancient Egyptians were building their pyramids.

More than 98 percent of the world’s Laysan albatrosses nest on the Northwestern Hawaiian Islands chain. The expansion provides increased protection for vital reproductive, nesting, and nurturing sites essential to the longevity of this and other bird species. 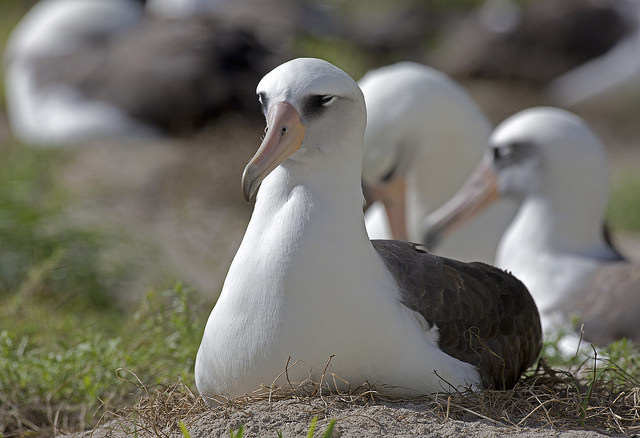 Papahānaumokuākea protects one of the largest groupings of seabirds in the world, with 14 million birds from 22 species. Wisdom, the Laysan albatross pictured in the foreground, is at least 65 years old and is thought to be the world's oldest bird. She returned to Midway Atoll in 2016 to successfully hatch a chick. 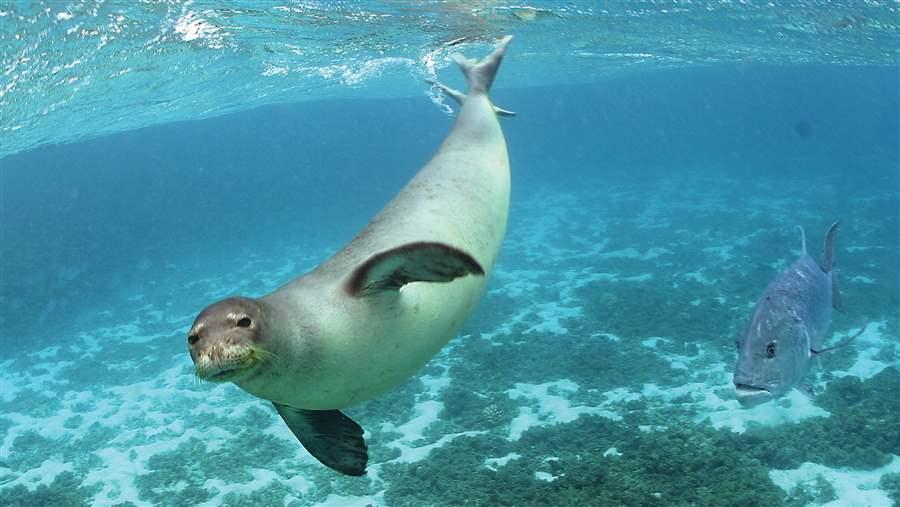 At least a quarter of the species in Papahānaumokuākea on land and sea are endemic—found nowhere else on Earth. Among those is the Hawaiian monk seal, one of the most endangered marine mammals in the world, according to the California-based Marine Mammal Center. Some places within the expansion area show what is known as 100 percent endemism—meaning that all species are found only there—at depths of 100 meters (328 feet).