Access to energy has always been vital to ensuring that the U.S. Department of Defense can carry out its broad portfolio of missions. From barracks to the battlefield, the U.S. military depends on uninterrupted power at its bases and a reliable supply of fuel for its aircraft, vehicles, and weapons platforms to maximize effectiveness and efficiency. But as operations have become increasingly dependent on computerized systems that consume greater amounts of electricity, the need for resilient, cost-effective, and clean energy has come to the forefront.

“Mission assurance is energy assurance,” James said. “In order for the mission to be accomplished, energy sources must be secure and electricity must be constant.” 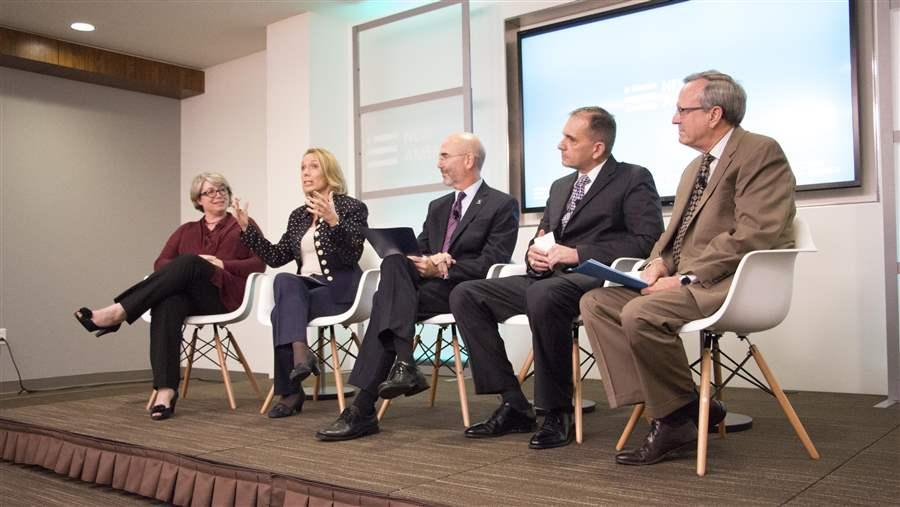 James and Ballentine detailed how overseas operations rely on cyber capabilities and stressed that the networks that enable aircraft to fly, weapons systems to deploy, and command centers at bases at home and abroad to operate 24 hours a day must receive a constant supply of electricity. Ballentine said the biggest advocates for clean energy solutions are generals and admirals who are increasingly concerned about key missions and operations coming to a halt in the event of a power outage. And as the threats in the cyber domain become more advanced, distributed energy technologies such as microgrids can make military installations more resilient by providing reliable, consistent power to critical base operations if the commercial grid fails.

A key component of the Air Force strategy centers on its new Office of Energy Assurance and leverages the experiences of the Army and Navy, which have also established dedicated energy offices. Ballentine emphasized the importance of coordinating with the other branches to identify and implement best practices for deploying clean and efficient technologies that strengthen energy security across the Air Force.

The discussion, in addition to presenting the new Air Force energy strategy, included representatives from each branch of the military as well as a member of Pew’s Clean Energy Business Network. The officials from the other services echoed James and Ballentine on the need for clean energy options. John Kliem, deputy director of the Navy’s Renewable Energy Program Office, and Michael McGhee, executive director of the Army’s Office of Energy Initiatives, outlined how their offices leverage private sector resources to secure cost-effective renewable energy.

The panelists also discussed ways that businesses can partner with the Pentagon to provide cleaner and more secure and efficient energy to military facilities. Larry Richardson, CEO of ReEnergy Holdings, explained how his company entered into a long-term power purchase agreement with the Army in 2015 to provide 100 percent of the energy needs at Fort Drum, New York. ReEnergy developed and operates a renewable biomass facility, which strengthens energy security at the base by ensuring uninterrupted electricity, even if the surrounding commercial grid loses power.

Additionally, McGhee said the service branches do not have the funds to make the capital investments required to provide the level of energy security that constant military operations require. He suggested that this is a key area that the private sector can assist with and profit from. Through his office, the Army works to capitalize on innovative companies that are willing to partner with the military and invest in new technologies and renewable power.

“For strategic war-fighting capabilities, we need strong partnerships with businesses,” Kliem concurred. “Our new mission is to focus on resiliency, and that’s important because our nation needs $10 billion in upgrades to our electrical infrastructure and the Navy needs major upgrades. The only way we’re going to get there is through partnership with industry and third-party financing.”

The panelists agreed that clean energy for the military is here to stay. They were adamant about the need for partnerships for large- and small-scale projects on bases and installations and encouraged businesses to reach out to their respective acquisitions offices and be patient and creative in overcoming sometimes complicated contracting processes.

“The enemy is at the gate,” Ballentine said. “There are two of them: One, the threat against our utility power grid has increased dramatically in the last five years. Second, the changing climate. We need a sense of urgency about solving these problems.”

Tom Swanson is project director with the clean energy initiative and oversees The Pew Charitable Trusts’ project on national security, energy, and climate.