This analysis has been updated to reflect the most recent information.

Fishermen along the southeastern U.S. coast report that after years of decline, red snapper are once again plentiful. That’s why anglers are stumped by the results of a new population study showing that this once severely overfished species still isn’t recovering sufficiently.

The analysis was conducted by experts from universities, state agencies, the National Oceanic and Atmospheric Administration’s Fisheries Service (NOAA Fisheries), and the South Atlantic Fishery Management Council, which governs fishing in federal waters from North Carolina to Florida’s East Coast. The study comes six years into a fishing moratorium designed to help the region’s red snapper population recover. It finds that although the species’ numbers are increasing overall, the population is still below a healthy level, with too few of the older and bigger fish that breed the best. And it notes that despite the fishing freeze, too many red snapper are still dying to keep the recovery plan on track.

But how can this be?

Cause of death: Incidental catch

Although managers made a limited exception to the moratorium—allowing fishermen to catch a small number of red snapper for a few days each summer from 2012 to 2014—the core problem is something else: bycatch. Too many red snapper are caught when fishermen target other snapper and grouper species that also live in deep water. Despite being released, red snapper often suffer such extensive organ damage from the rapid pressure change as they are pulled to the surface that even if alive when released, they can die within days.

The new population study reports that 38 percent of the commercially fished red snapper that are released die this way; for recreational fishing, it’s 28.5 percent. To calculate those numbers, scientists worked on board fishermen’s boats to tag and study released fish, analyzing fishing techniques, where fish were caught, and other factors. Although still too high, those percentages are lower than in the past, thanks to smarter fishing practices such as circle hooks and de-hooking devices that help released fish survive. 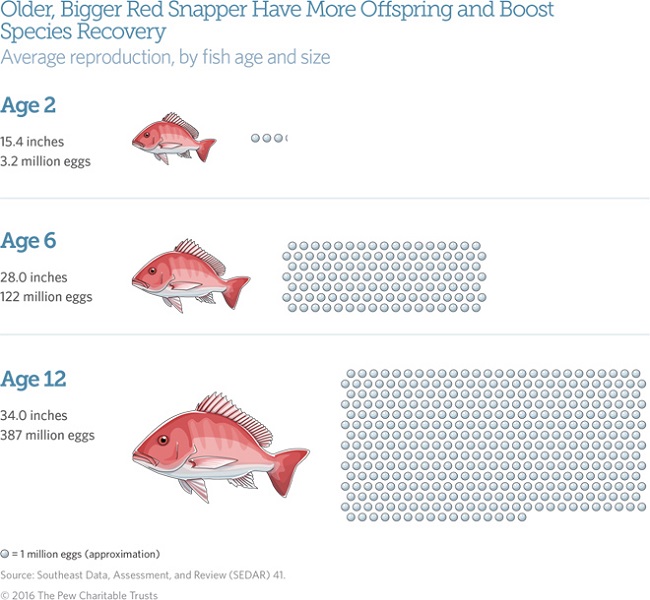 The new study included data collected from fishermen as well as scientific observations of fish primarily caught in traps used for research. Such population studies always contain some level of uncertainty, but a rigorous review process, including evaluation by a panel of independent experts, helps to ensure that they are based on the best available science.

Since the last population study almost six years ago, data collection efforts have expanded. This was particularly evident in Florida, where fishermen, working in cooperation with the Fish and Wildlife Research Institute—the science arm of the state agency that protects and manages fish and wildlife—helped provide information that was incorporated into the latest analysis. In addition, NOAA Fisheries extended its sampling range south to include more red snapper habitat in Florida. The results confirmed that the population still has too few older and larger fish, which are the best breeders.

Although some fishermen have objected to the findings of this and other red snapper research, others—some of whom serve on the South Atlantic council—have accepted the conclusions and offered a suite of ideas to better manage red snapper. The council is planning a stakeholder-driven process to examine the proposed solutions.

The public has a chance to help shape new fishing rules

Some of the suggestions are promising; others will require more study. Council staff members are analyzing the proposals and are scheduled to report back to members at a meeting Sept. 12-16 in Myrtle Beach, South Carolina. Public meetings are expected to be scheduled after that.

The ideas represent a shift in strategy in response to the study’s unexpected finding that too many fish are still dying. The rebuilding plan calls for full recovery by 2044, so it’s important to get it right in the early stages of the plan. Some highlights of the council’s proposals include:

A recreational deep-water fishing season would operate like a deer or duck season on land, consolidating the time frames for individual reef species and replacing them with a single snapper and grouper season. That would give fishermen the opportunity to keep whatever they caught up to allowable limits, rather than requiring them to throw back many fish that are likely to die. And during the months that the recreational deep-water fishing season is closed, the fish would get a break, theoretically reducing the number of red snapper that are caught incidentally. Council members want scientists to analyze the idea to determine how long a snapper and grouper season might last and the amount of red snapper that could be taken each year. They also want fishermen to weigh in about whether they would favor such a measure.

Now is the time for fishermen, scientists, and fishery leaders to work together to find solutions that keep the South Atlantic red snapper’s 2010 recovery plan on track and seek opportunities for people to enjoy their favorite catch.