This analysis was updated on Aug. 12, 2016, to more accurately reflect the workings of the European Union’s carding system for illegal fishing and how officials decide whether a country should be carded.

The European Union (EU) is the world’s largest importer of fishery and aquaculture products, in terms of value. With about 60 percent of fish consumption deriving from imports, the EU has a critical role to play in ensuring the health of global fish stocks. A key threat to the sustainability of global fisheries is illegal, unreported, and unregulated (IUU) fishing, which is estimated to account for about 500,000 metric tons of seafood imported by the EU every year, valued at approximately $1.2 billion (1.1 billion euros).

In recent years the EU has taken significant steps to address illegal fishing and unscrupulous practices in the seafood supply chain, beginning in 2010 when its legislation to combat IUU fishing and prevent illegally caught seafood from entering the EU market became law. 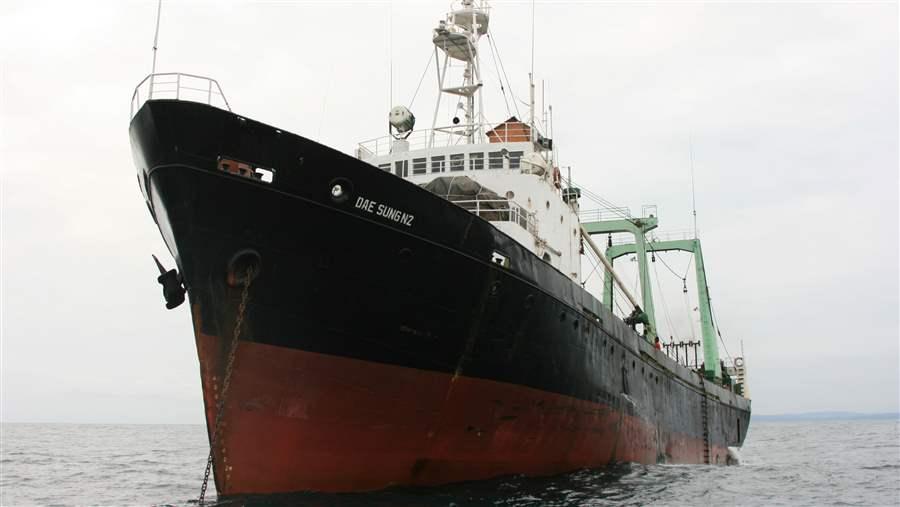 A South Korea fishing vessel off the coast of Gabon. South Korea was delisted from yellow card status in April 2015 after closing loopholes in its system and revising the legal framework governing its long distance fleet in line with international requirements.

In line with the EU IUU Regulation, the European Commission can enter into dialogue with non-EU governments to assess whether a country is combatting illegal fishing effectively and following international law. If a country is not, the commission can warn, or yellow card, that government. Countries with yellow cards that fail to reform sufficiently and promptly face a red card—that is, a ban on selling seafood to the EU. The Commission has carded 23 non-EU countries since 2012 using this system. It is most likely to remove a red or yellow card if a country’s government has demonstrated the political will to address IUU fishing in a timely manner

To better understand the Commission’s carding system, Pew and three other nongovernmental organizations analyzed 20 of the Commission’s carding decisions. The examination revealed the most commonly cited shortcomings of countries that fail to comply with international standards for fisheries management and outlined what States could do to make necessary reforms.

The Commission has cited the following issues repeatedly in its carding decisions. These areas should be the focus for countries seeking to better meet their international legal obligations and are considered minimum standards for effectively fighting IUU fishing. The extent to which these measures apply depends greatly on the specific characteristics of the country concerned.

When issuing a warning, the commission publishes all information relevant to the decision in the EU’s Official Journal, but there is no official resource that summarizes the main themes influencing commission decisions.

Pew and its partners set out to fill this gap by analyzing the EU cardings of 20 countries between 2012 and 2015. Although the findings of this examination are simply guidance, they should be used as a resource for countries in evaluating their fisheries management systems, identifying key weaknesses, and initiating required reforms.