Few states know this unfortunate pattern better than Oklahoma. The state’s General Revenue Fund (GRF) is supported in part by oil and gas gross production taxes and corporate income taxes, two especially volatile revenue sources. After contributing nearly $250 million to the state’s GRF in 2000, oil production taxes didn’t even meet the minimum requirement to allocate any funds to the GRF from 2001 to 2004. Similarly, gas production taxes contributed almost $700 million to the GRF in 2008 but less than $100 million in 2015. 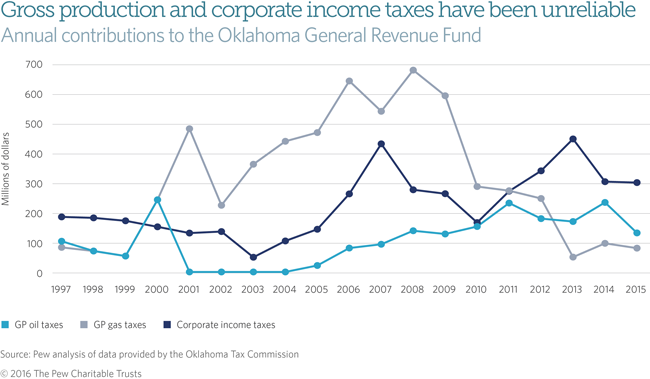 Tired of simply reacting to revenue changes, state policymakers opted for a more proactive solution by enacting House Bill 2763 during the 2016 legislative session. This bill allocates a portion of oil and gas production taxes as well as corporate income taxes to a new revenue-smoothing fund called the Oklahoma Revenue Stabilization Fund. While these sources will still support the GRF, any revenue above their average five-year GRF contribution will be deposited in the new stabilization fund.

Although Oklahoma already has a rainy day fund known as the Constitutional Reserve Fund, H.B. 2763 provides an important new budgetary tool to help mitigate volatility and soften future downturns. By saving above-average oil and gas production and corporate income tax revenue, Oklahoma joins 14 other states that tie savings to volatility—a policy that Pew has identified as a budgetary best practice. Linking deposit rules directly to extraordinary or unexpected growth makes saving a consistent, reliable practice during periods of growth. This allows states to save more when funds are available and to set aside less—or make withdrawals from the fund—in leaner years. By requiring the transfer of above-average revenue from these volatile sources into the Revenue Stabilization Fund, H.B. 2763 reduces the GRF’s reliance on the unpredictable sources and helps to promote a structurally balanced budget.

Saving is not always easy in the face of growing fiscal and economic pressures. Yet, as many states have realized, a failure to save results in deep cuts to vital programs and the prospect of tax increases when people can least afford it. The passage of H.B. 2763 provides Oklahoma lawmakers with another layer of protection against the booms and busts of their revenue cycle. It also makes the state a leader at managing volatility.

Robert Zahradnik is a director and Steve Bailey and Jon Moody are senior associates with The Pew Charitable Trusts’ states’ fiscal health team.