During the early 20th century, Americans could buy flood insurance from private companies, but flooding along the Mississippi River in 1927 caused massive damage and financially crippled many firms. That event highlighted the difficulties of insuring for flood risk: Predicting the cost of potential flood damage is challenging, and because a single flood event can affect whole regions, insurers with multiple policies in at-risk areas need significant reserves. In addition, only people most at risk typically purchase insurance, increasing the cost of premiums for buyers and the likelihood of large payouts for insurers.1 As a result, private insurers concluded that “insurance against the peril of flood cannot successfully be written.”2 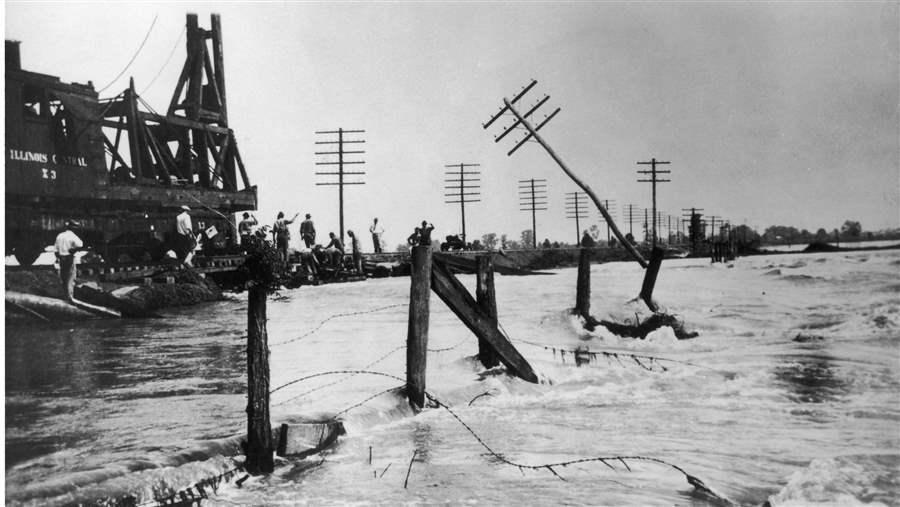 Crews from the Army Corps of Engineers respond to the Great Mississippi River Flood of 1927.

In 1968, to fill the resulting void, the government created the federally funded National Flood Insurance Program (NFIP), which aimed to control the costs of post-disaster relief to the federal government and to motivate state and local governments to restrict building in high-risk areas through their land use authority. Further, insurance would be available only to communities that adopted flood plain-development regulations that met the program’s minimum requirements.

However, this plan required creating risk-based flood maps before communities could participate, and within the first year of the program it became apparent that making the maps would take longer than expected. When Hurricane Camille hit the southeastern United States in 1969, only 16 policies were active nationwide and none of the damaged properties had coverage. Similarly in 1972, less than 1 percent of the damage from Hurricane Agnes in the Northeast was covered by the NFIP. Congress responded by allowing communities to join the program before mapping was complete on an emergency basis and by loosening deadlines and requirements for participation.

Since then, Congress has updated the NFIP multiple times in an attempt to increase the number of individual policyholders while holding down costs. At the beginning of 2016, the program included more than 22,000 communities and more than 5 million policyholders. However, rates do not fully reflect risk, so as losses have increased, the NFIP has become financially unstable. The program collects too little in premiums and relies heavily on support from the U.S. Treasury when major floods hit areas with large numbers of policyholders. In 2014, the Federal Emergency Management Agency, which oversees the NFIP, calculated that the program is $24 billion in debt.

Moving forward, Congress needs to consider further updates to NFIP because current policy is not adequate to the task of meaningfully reducing the effect of flood events on homes, businesses, communities, infrastructure, natural habitats, and the economy. To effectively address flooding nationwide, federal lawmakers must ensure that rates reflect actual risk, that the NFIP has sufficient financial reserves to respond to catastrophic events, and that communities improve the management of frequently affected areas.