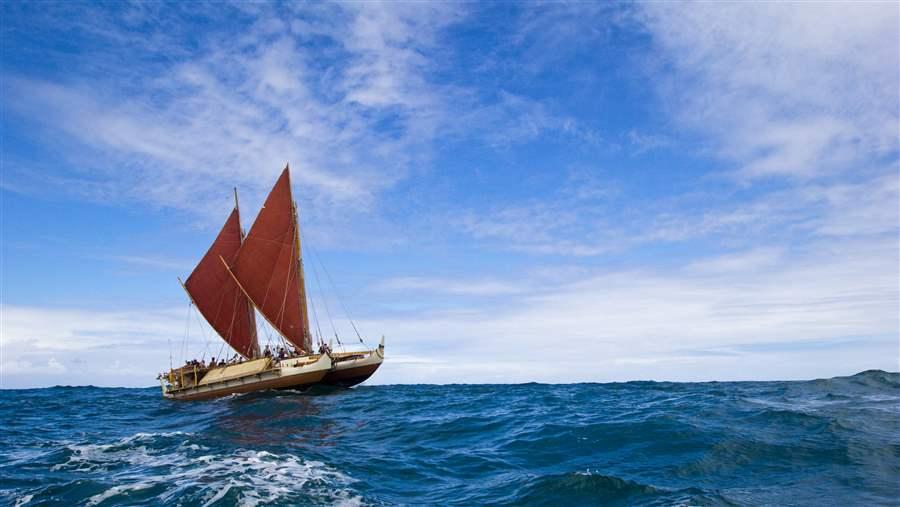 The Hōkūle’a, a traditional Polynesian voyaging canoe, will dock in New York as part of World Oceans Day festivities.

On Wednesday, June 8, an unusual craft will sail up the East River off Gantry Plaza State Park, in full view of the United Nations headquarters in Manhattan: The Hōkūle’a, a traditional Polynesian voyaging canoe, will dock in New York as part of the Mālama Honua Worldwide Voyage, which began in 2013.

Mālama Honua is Hawaiian for "taking care of Island Earth"— and, fittingly, the goal of the voyage is to use community engagement to inspire ocean conservation efforts around the world. When it ends next year, the trip will have covered more than 60,000 nautical miles, with stops in 100 ports and 27 countries. The crew of the Hōkūle’a is doing this using the ancient practice of voyaging, which relies on a technique called wayfinding to navigate the ocean by observing the sun, moon, stars, and natural environment.

The visit to the United Nations closes an important circle. In August 2014, at the canoe’s stop in Apia Harbor, Samoa, United Nations Secretary General Ban Ki-moon sailed on the Hōkūle’a and presented the crew members with an ocean conservation message in a bottle to take with them on the rest of their voyage. Renowned oceans advocate Dr. Sylvia Earle also joined that sail. At the United Nations this week, the boat’s crew will return the message, along with hundreds of other promises to protect the ocean — from citizens, political leaders, and others—that they have gathered along the voyage.

On the afternoon of June 8, Hōkūle’a master navigator and Polynesian Voyaging Society President Nainoa Thompson, along with Palau President Tommy Remengesau, will speak at the UN as part of an event hosted by the Republic of Palau, the Federated States of Micronesia, the Republic of Seychelles, and Grenada, four island nations that are actively protecting their ocean. Thompson, Remengesau, and other speakers will focus on how the UN can better advance its ocean agenda. This includes negotiating a new treaty to protect areas beyond national jurisdiction, which are known as the high seas, and which make up two-thirds of the world’s ocean.

Parts of the high seas are managed by international bodies that oversee fishing, seabed mining, or shipping, but there is no overarching mechanism to ensure that those organizations work together toward the same goals. Further, the existing management structure doesn’t take into account activities that might happen on the high seas in the future, such as energy development.

This sectoral management approach may have worked in the past, when human impact on the oceans was lighter than it is today and when the value of the high seas was not fully understood. But as commercial activities such as fishing, oil and gas exploration, and deep-sea mining continue to grow, the need for a protective mechanism is becoming increasingly important.

Negotiations on the treaty began in March of this year and will continue with a UN Preparatory Committee meeting in August and September. A new treaty could be finalized as soon as 2019 or 2020.

Thompson’s talk to UN member states is a prime opportunity for international leaders to hear from a powerful voice who can speak of the high seas and their wealth of biodiversity firsthand. The Hōkūle’a and its voyage are critical reminders of humankind’s connection to the ocean and why we must protect it for future generations.