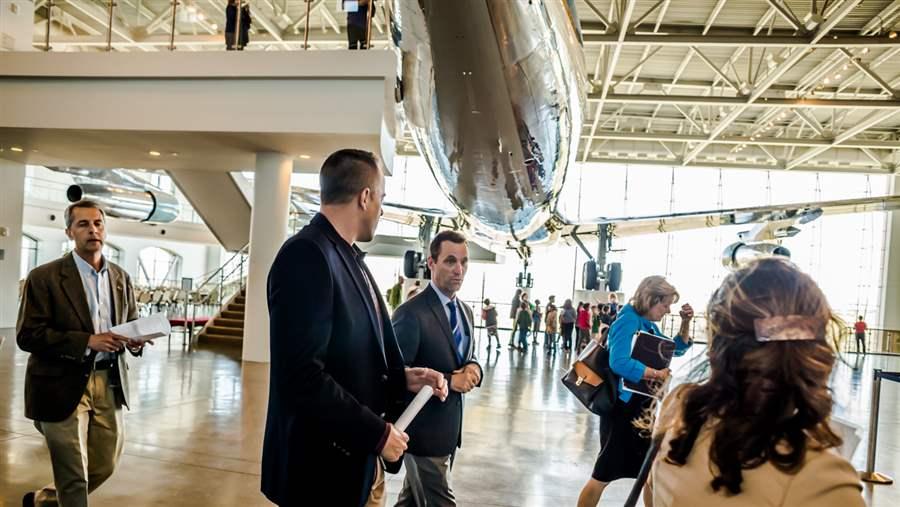 The Ronald Reagan Presidential Library in Simi Valley, California, is a tribute to the 40th president of the United States and a repository of cultural and historical artifacts. It houses a former Air Force One jet and a replica of the Oval Office and is the final resting place of Ronald Reagan and his wife, Nancy. More than 300,000 people visit the campus each year , but one feature that is not part of the typical guest experience is the 125,000-square-foot facility’s highly efficient combined heat and power (CHP) system, which generates 95 percent of the library’s energy on-site.

Recently, U.S. Representative Steve Knight (R-CA) toured the CHP facility to learn more about its benefits. During the tour, facilities manager John Lehne highlighted the environmental and economic benefits of CHP. He said the system has a total efficiency of 82 percent—compared with the 30 percent efficiency of typical grid power—reducing annual NOx emissions by nearly 23,000 pounds and CO2 emissions by nearly 4 million pounds, which is the equivalent of removing more than 400 passenger vehicles from the road.

The system uses 16 C60 microturbines, manufactured by Capstone Turbine Corp., to produce 960 kilowatts of electricity and to heat and cool the library and the Air Force One Pavilion. And since it was installed in 2005, it has been fully operational, with no disruptions, providing a reliable source of electricity for the library. 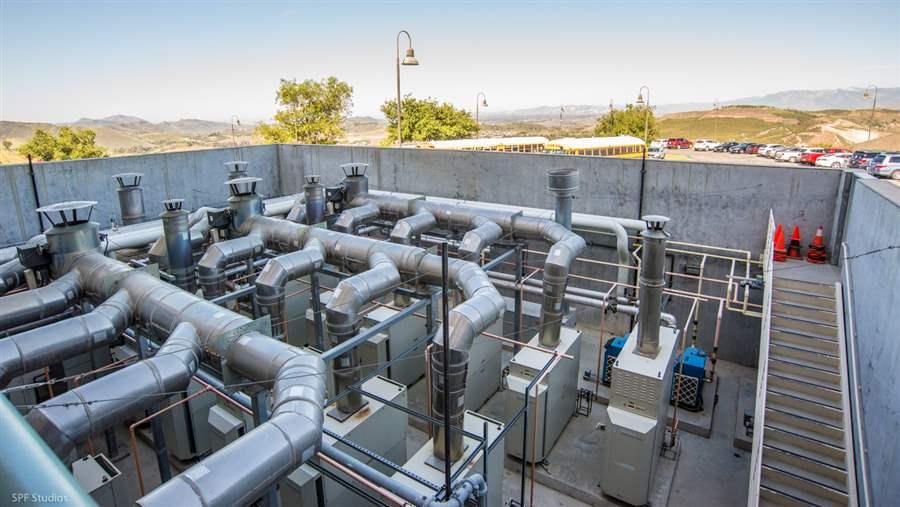 A microturbine array provides 960 kilowatts of power at the Ronald Reagan Presidential Library.

Capstone, founded in 1988, is headquartered in Chatsworth, California, and has two manufacturing plants just a few miles outside Rep. Knight’s district. The company has 200 employees in the region and continues to grow as new projects are commissioned: It has turbines installed in 73 countries.

The firm’s CEO, Darren Jamison, and distributor development manager, Chris Theriot, were present for the tour and discussed the crucial role of federal policy in supporting the continued growth of the clean energy industry. Capstone, along with more than 240 other businesses, endorsed the Power Efficiency and Resiliency (POWER) Act (S. 1516/H.R. 2657), which would increase the federal tax incentive—provided through the investment tax credit—for industrial energy efficiency technologies, including CHP.

The bill would provide parity with other power-generating systems that benefit from the credit and would allow large industrial systems to qualify for these incentives, helping to spur a movement toward more efficient energy technologies. The legislation also would encourage the deployment of more CHP facilities, help businesses reduce energy costs, and spur the growth of new industries manufacturing and installing this technology.

“I am very thankful to Capstone Turbine for providing such an insightful and interesting tour of their combined heat and power facility at the Ronald Reagan Presidential Library in Simi Valley,” Rep. Knight said. “Their operation is an example of how American ingenuity and innovation can be used to solve problems in communities across the country.”