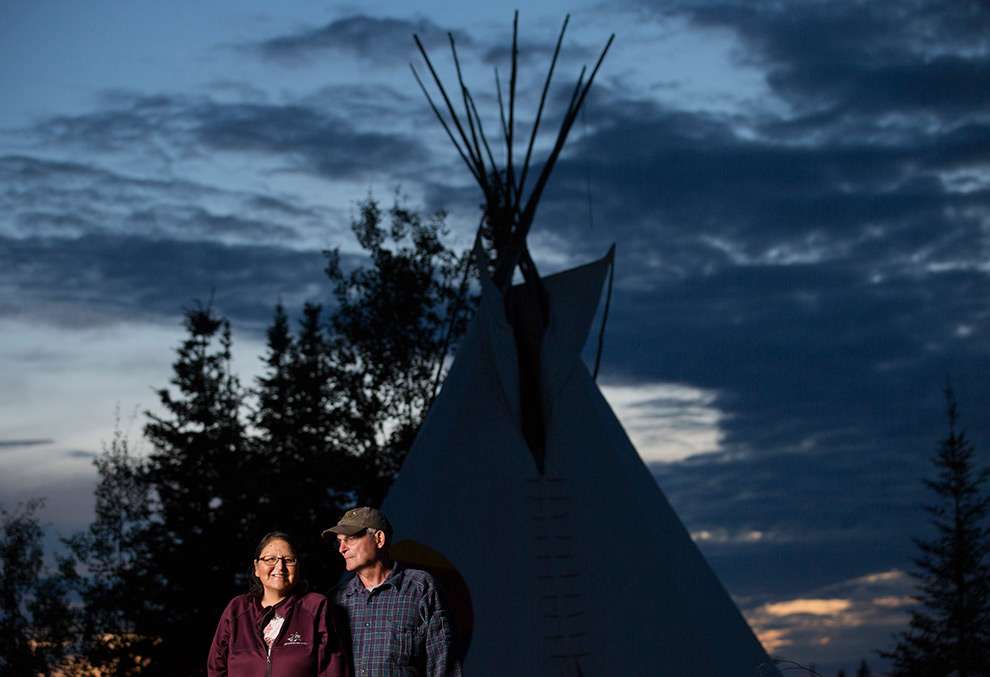 POPLAR RIVER, Manitoba—Sophia Rabliauskas strides briskly down a narrow dirt trail toward the rapids, sure and confident despite the steep descent and the rushing river just a few feet below. Her two grandchildren race past in a blur of swinging arms and legs, sending up tiny clouds of dust in their scramble to reach the rock ledges that offer a front-row seat for one of nature’s great aquatic spectacles.

“Be careful, don’t slip,” she calls out to them. But her worry quickly gives way to a smile as the water comes into full view, framed against a verdant backdrop of poplar and spruce.

Sophia has been coming to these rapids—called Nagayam Powitik—since she was a little girl. Her father would bring her, just as she and her husband, Ray, bring their grandkids now, to watch the Poplar River roar out of the boreal forest, clear and unpolluted, toward her village.

It is one of the places where Sophia feels safe, and at peace. “Listening to the wind and to the river, it brings some calmness and serenity into your being,” she says.

“When I need healing, I go to the land.”

Sophia is understandably reverent: She knows in ways spiritual, cultural, and scientific how important this forest is, not just for the survival of her people—the Anishinaabeg—but for the health of the planet.

Just a mile or so below the rapids, the river empties into Lake Winnipeg, the world’s 10th-largest freshwater lake, which covers more than 9,400 square miles in the Canadian province of Manitoba.

Upstream from these rapids, the Poplar River snakes deep into a wilderness region known as Pimachiowin Aki, ”the land that gives life.” At more than 8.25 million acres, the area is one of the largest undisturbed expanses of forest and wetlands remaining on Earth.

Pimachiowin Aki is part of the boreal forest ecosystem in Canada, which holds some of the planet’s largest stores of terrestrial carbon and plays a critical role in regulating climate.

This region may be wild and remote, but it is certainly not an empty wilderness. The boreal sustains more than 600 First Nations, whose people have safeguarded the landscape for millennia. 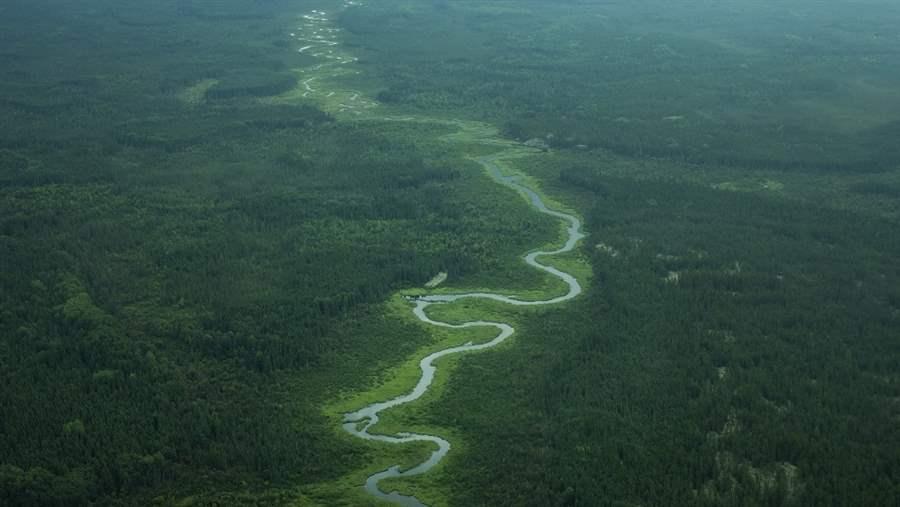 Protecting the land is a responsibility that Ray and Sophia take seriously.

Sophia, a fluent Anishinaabe speaker who was born and raised in Poplar River First Nation, has been a language teacher and led camps for both young people and adults to connect with their culture. Ray is a Lithuanian-Canadian originally from Kirkland Lake, Ontario. He came to Poplar River almost 40 years ago to help build houses but stayed after realizing that the community was the place he also wanted to call home. Here, the couple has raised four children.

“I love the land, and I love the people here,” Ray says.

“I don't know of any other place where you're reminded so much of the beauty of the creator and what he made,” he adds. Ray is now Poplar River’s representative to the Boreal Leadership Council, a coalition of First Nations communities, environmental groups, and companies working to ensure a balance of development and conservation in the forest.

The people of Poplar River have been trailblazers in Indigenous land-use planning. For more than a decade, Sophia and Ray have helped lead a campaign by the Poplar River First Nation and several other Indigenous communities—including Bloodvein, Little Grand Rapids, and Pauingassi—to have Pimachiowin Aki declared a UNESCO World Heritage site. The designation is reserved for places of cultural and natural heritage that are deemed to be of “outstanding value to humanity. 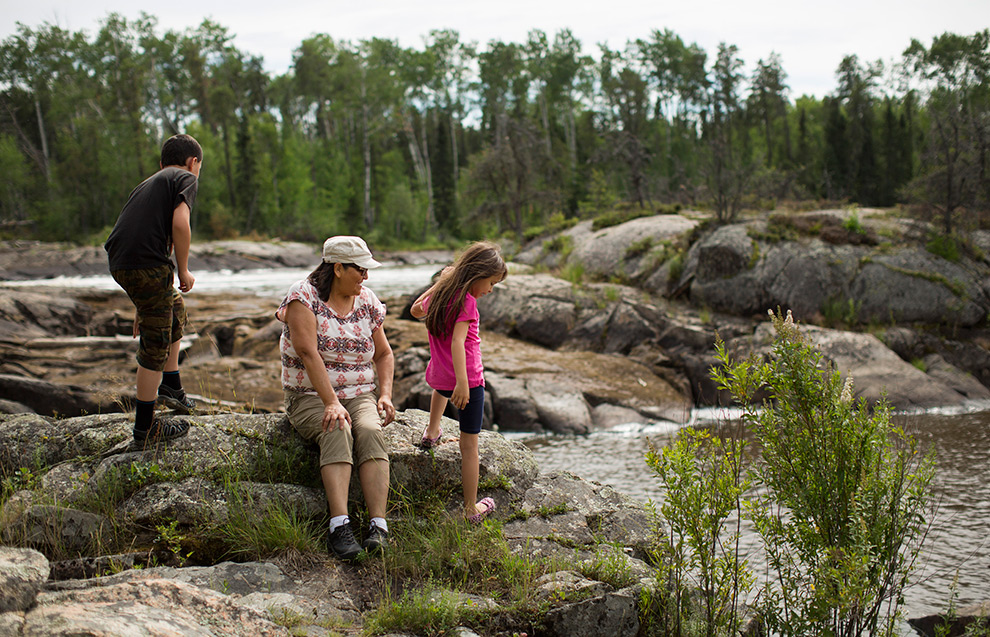 I love the land, and I love the people here. I don't know of any other place where you're reminded so much of the beauty of the creator and what he made.Ray Rabliauskas 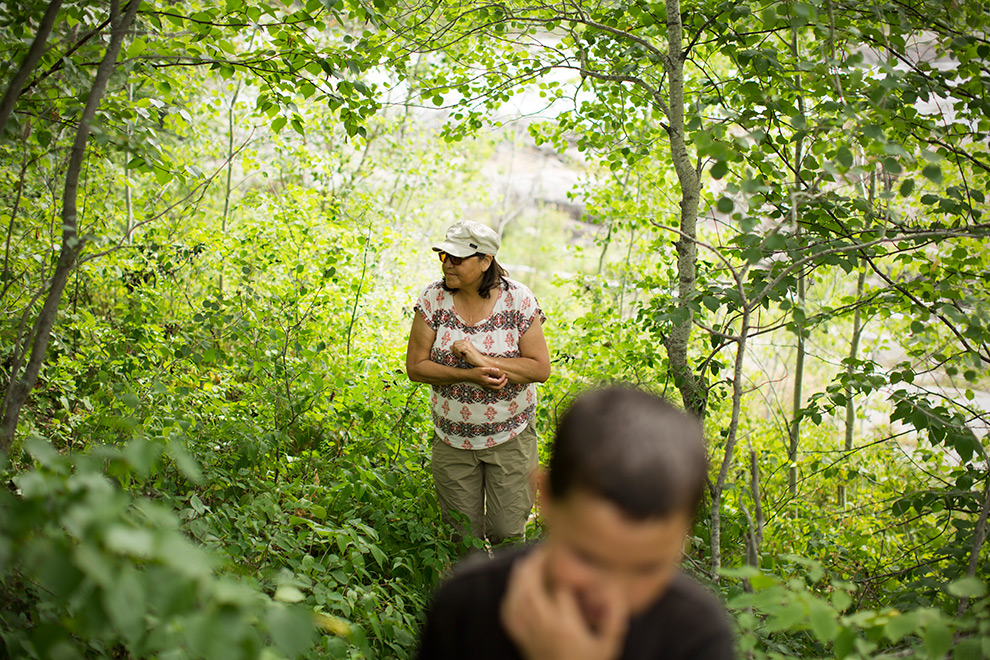 Most of the land included in the proposed World Heritage site has already been permanently protected from industrial development, due in large part to the work of Indigenous communities committed to keeping their traditional territories pristine. But securing an added designation from UNESCO would highlight the global significance of the broader boreal forest region, which in Canada stretches across 1.2 billion intact acres from Yukon to Newfoundland and Labrador, and would recognize the vital role the Anishinaabeg have played in protecting this land, while also drawing their sustenance from it, for more than 6,000 years.

“Anishinaabeg really believe that they're inseparable from the land because of their sacred connection, because of their sacred responsibility of looking after the land,” says Sophia, who in 2007 was awarded the Goldman Environmental Prize, an international award for grassroots conservation efforts, for her work to keep the forests surrounding the Poplar River intact.

Sophia and Ray say they are driven by a commitment to Anishinaabe elders and to honoring centuries of environmental stewardship. They want to show the international community the importance of recognizing Indigenous knowledge and rights in land-use planning. 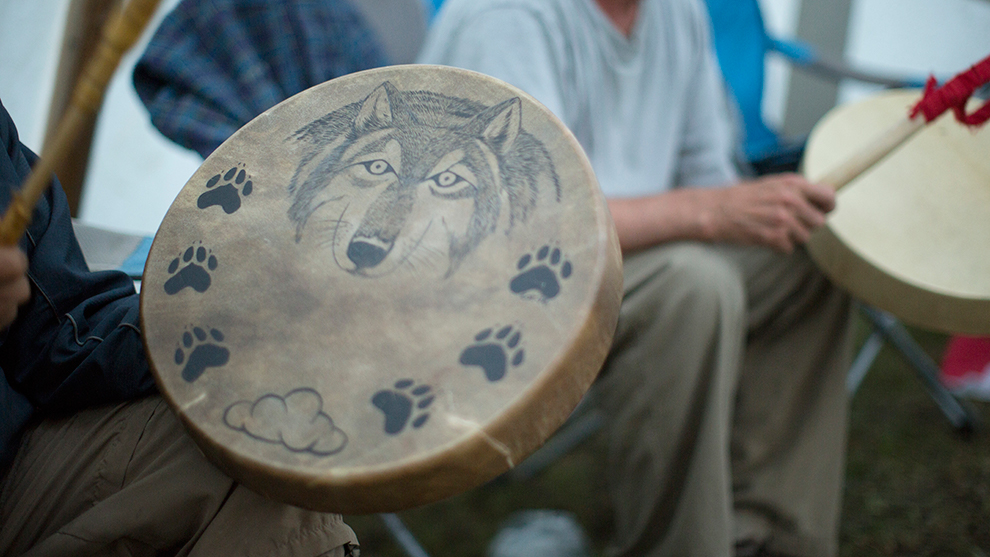 Anishinaabe elders “are always trying to educate,” Ray says. “That's what our land plan is, is to educate people about … how to care for the land and why it's important. And [people] need to understand that before it's too late, before they destroy everything.”

In seeking UNESCO recognition, Sophia and Ray say the elders are motivated by a desire to share their traditional knowledge with others about how to keep the environment healthy. The Anishinaabe conservation ethic is rooted in a simple concept that applies both locally and globally: Societies cannot survive if they ruin the land that provides them with what they need to live.

“By protecting the trees, we help protect the planet,” Sophia says. And, she adds, “it’s not by accident that the land is still pristine. It’s the way they kept it, and it’s the way they have taught us to keep it.”

"Archaeologists have discovered traditional hunting and cooking tools and have located ancient camps and pictographs on rock faces that date back 6,000 years."

For Sophia, the connection is personal: She says her father taught her countless lessons about “keeping the land” when she was growing up. “I remember taking a branch off the tree. And my dad said, ‘Why did you do that? You shouldn't be doing that. Maybe the tree needs that branch,’ ” she says.

Her father, Sophia says, “provided for his family without any help from outside. And that really gave him pride in who he was.”  In fall and winter, he would head into the bush to hunt moose and trap rabbits. In summer, he would fish Lake Winnipeg for pickerel. In the spring, he would shoot ducks and geese.

He never took more from the land than the family needed, she says, and hunting in different areas from season to season was to ensure that wildlife populations were never depleted.

“That was their understanding of conservation,” she says. “It was [based on the need] to make sure that there is something available for [other] people.”

This relationship between nature and Anishinaabe culture is so central to Pimachiowin Aki’s World Heritage site nomination that Poplar River’s elders entrusted Sophia and Ray with documenting the oral history of the people and their culture for the UNESCO team evaluating the proposal.

“It’s an honor. When an elder gives us a responsibility, it's not to do this work for a few years. How we look at it, it's our lifetime commitment to do what they asked us to do,” Ray says. “And we pray a lot to make sure that the work that we do with our elders is done correctly, that we don't abuse it in any way, or we don't belittle it in any way.”

The Anishinaabe tradition of storytelling has kept vibrant the memories of ancient burial sites, long-abandoned settlements, early travel routes, and age-old trap lines. The stories form the foundation of an Indigenous culture so connected to its natural environment as to be indistinguishable from it. 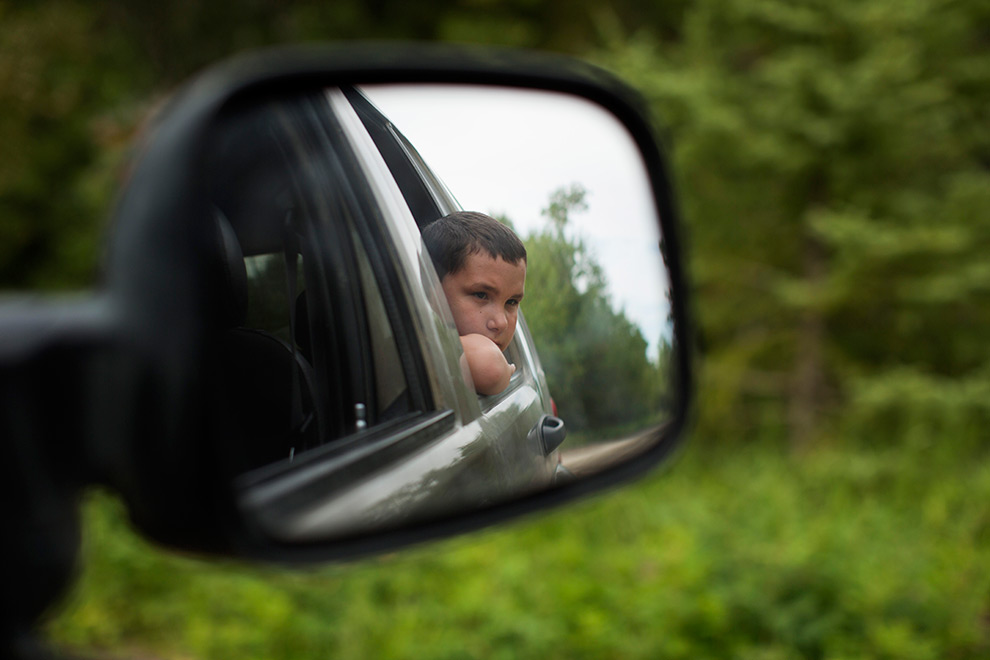 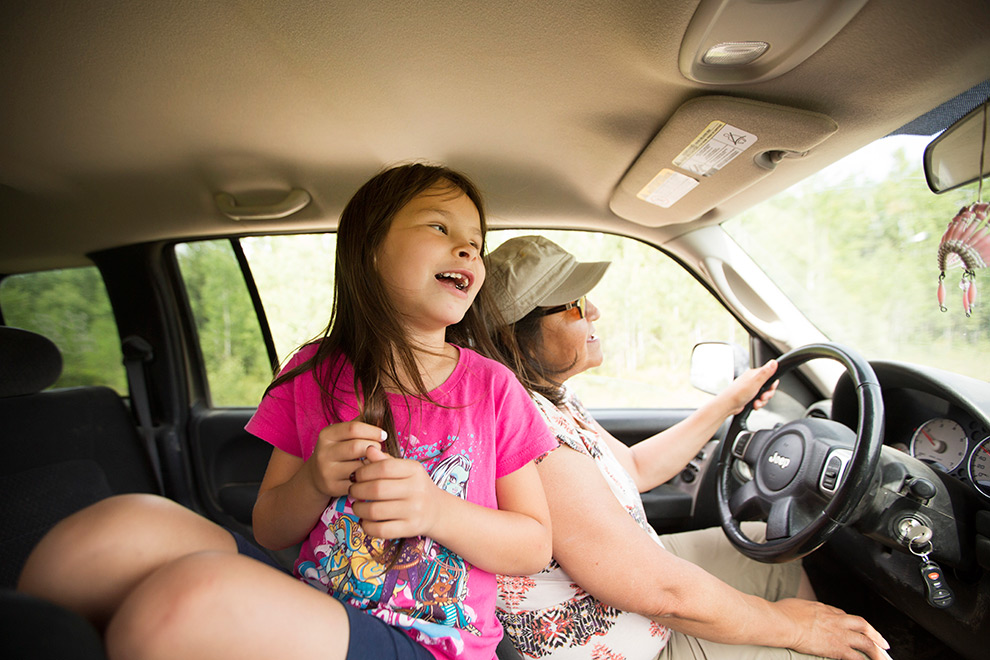 By any definition, Poplar River is an isolated place, largely cut off from the outside world. The community of about 1,300 is more than 250 miles north of Winnipeg, the provincial capital of Manitoba. For most of the year, it is accessible only by air or boat. An ice road opens for a few short months in deepest winter.

But an all-season road is under construction. While the road will help families lower their cost of living, Poplar River’s people worry about its potential environmental and cultural impacts.

“Every single person has mixed feelings” about the road, says Ray, who is working with Poplar River elders to limit potential impacts by identifying sensitive cultural and natural sites along the road’s path.

“I think it's a privilege to live in isolation,” Sophia says. “People [in the city] pay a lot of money to go stay at a cabin by the lake. And I just walk out my front door and out to the dock and swim in the water.”

By working to have Pimachiowin Aki recognized as a World Heritage site, Sophia says she is honoring her peoples’ past. She also feels a deep responsibility to the future, to her grandchildren. 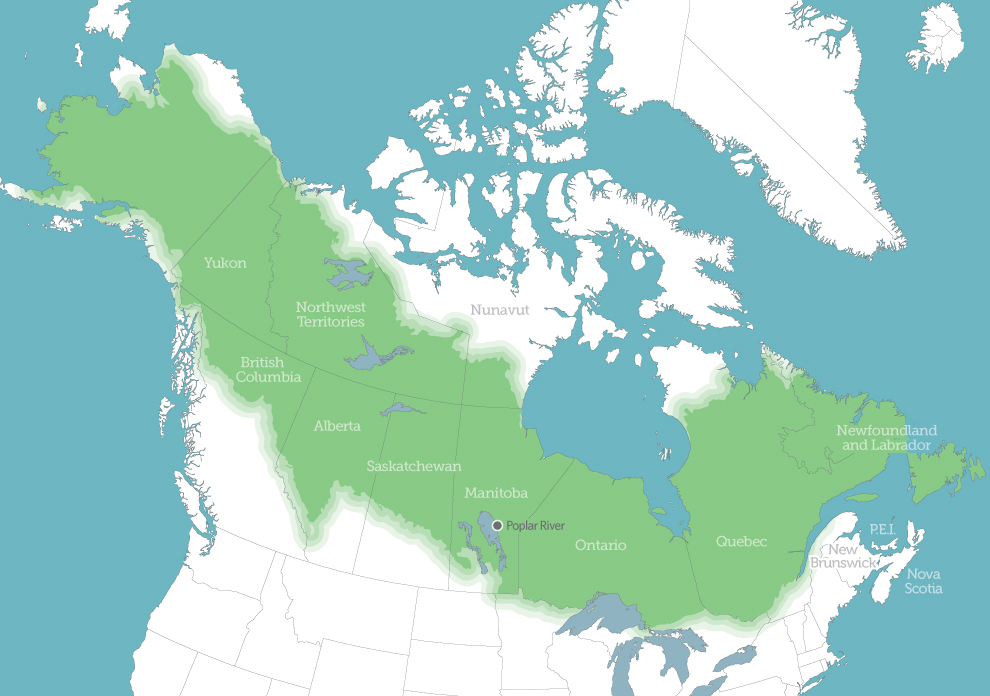 Sophia recalls her father urging her to teach her own children—and her children’s children—about how the land can heal and the value in sitting on the edge of the rapids, listening to the trees and watching the water flow.

“I want them to go out on the land, listen with their hearts … even just respecting who you are, respecting the land,” she says of her grandchildren. 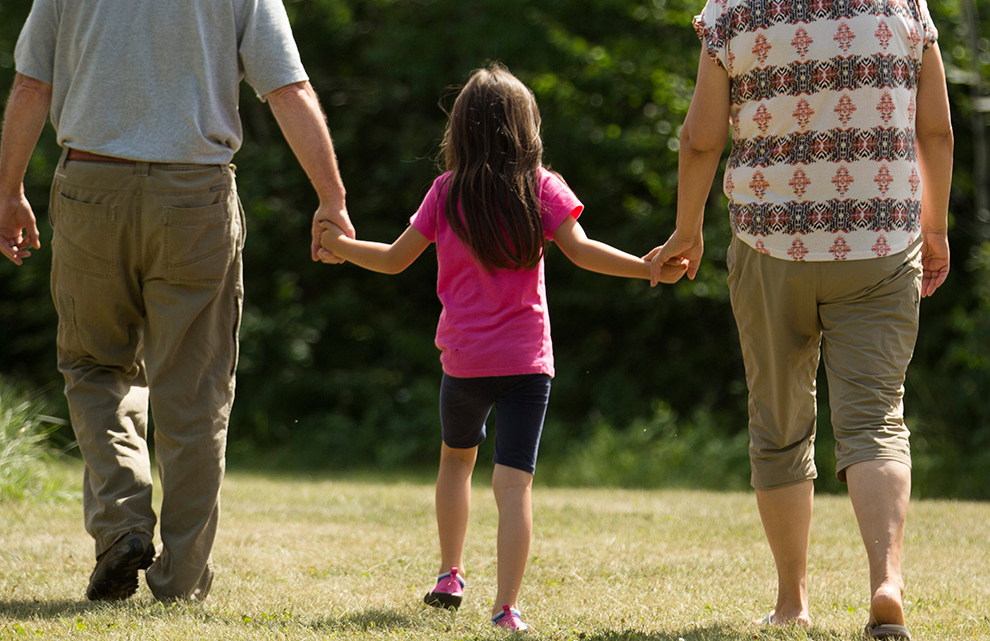 This article was updated Aug. 23, 2016, to reflect a revision in the list of First Nations communities supporting World Heritage site designation for Pimachiowin Aki.