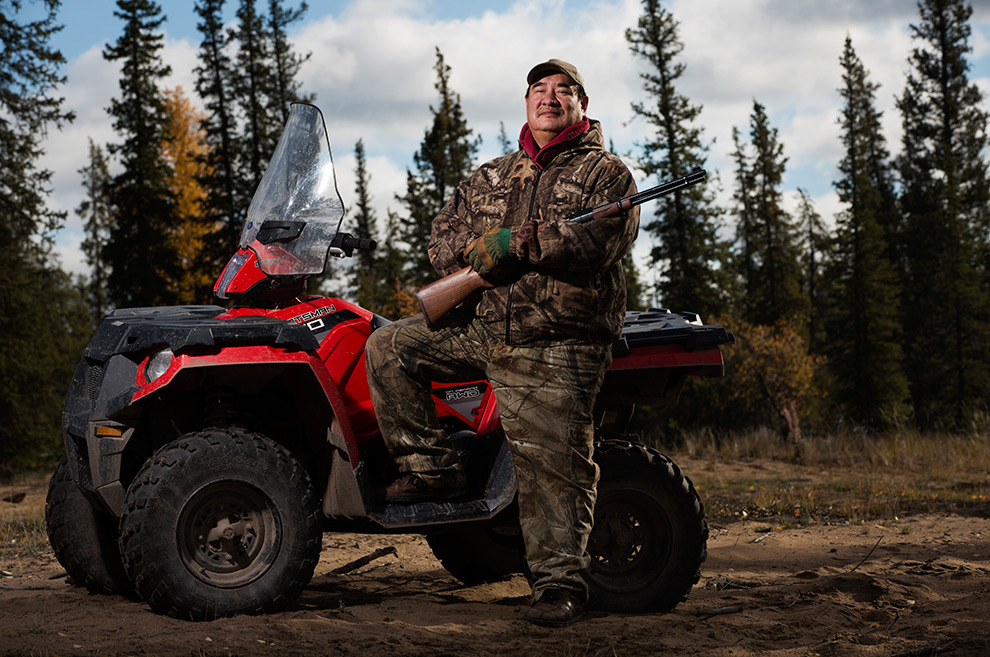 DUHAMEL LAKE, Northwest Territories—It’s a chilly morning in late September, as a raw north wind blows whitecapped waves hard against the shoreline of this backcountry lake in the northern reaches of Canada’s boreal forest.

Wisps of sand streak past the windows of James Marlowe’s cabin, making whistling sounds as they go. Frequent gusts bend the surrounding stands of tamarack and spruce. They announce the impending approach of another long sub-Arctic winter with a steady, booming howl.

But inside, protected from the elements, Marlowe is enjoying the comfort of a hearty wilderness lunch.

A pot of camp coffee simmers on the wood-burning stove near the cabin entrance. A batch of fried flatbread wrapped in tinfoil lies on the kitchen cupboard, next to a jar of jam. Steam rises from a bowl of hot moose and vegetable stew, cooked fresh with meat harvested after a successful hunt.

The cold wind has scuttled plans for an afternoon excursion on the lake—the waters are too choppy to launch a boat—but Marlowe is happy simply to be out here, in the thick of the forest.

“Just being on the land for a day, you know, it’s a good thing. It’s good for the soul,” he says.

Marlowe is a Dene hunter and guide from the Lutsel K’e Dene First Nation, a remote Indigenous community on the east arm of Great Slave Lake. He lives in the 350-person village of Lutsel K’e, about 115 miles east of Yellowknife, the capital of the Northwest Territories. But most weekends Marlowe makes the 30-minute drive deep into the bush, via a winding and hilly dirt road that ends in sand at the edge of Duhamel Lake.

His cabin, built by hand with about $5,000 worth of materials, and this territory, which his ancestors have occupied for thousands of years, are Marlowe’s little pieces of paradise. 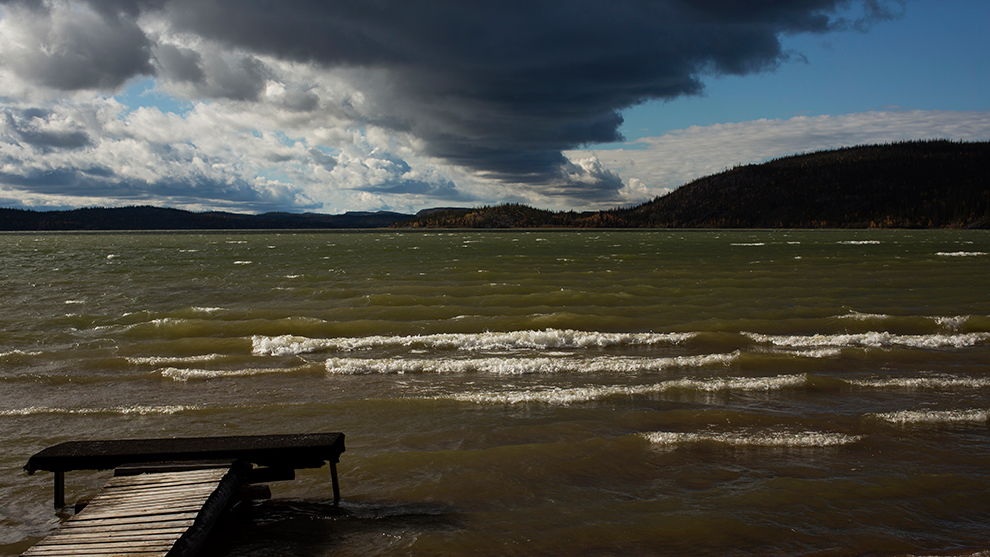 From his early teens, he has hunted, trapped, and fished the surrounding untouched wilderness. It is an area teeming with moose, ducks, geese, muskrat, beavers, pickerel, whitefish, and wild berries—all essential parts of the traditional Dene diet, lifestyle, and economy.

Marlowe gestures at a topographical map, which is pinned to his cabin wall, and then highlights the best spots for moose hunting and for fishing.

"The boreal forest region in the Northwest Territories covers 235 million acres, three times the size of Britain. About 206 million acres are intact."

But the lifestyle of the Dene in the Northwest Territories is changing, and so is the forest landscape, as demand for the area’s rich natural resources expands.

A diamond rush in the 1990s led to the opening of several mines in the territory, a burst of development that Marlowe believes has disrupted migratory patterns of caribou. Winter ice roads service the mines, bringing noise and traffic that also disturbs the caribou, a staple of the local diet and economy.

“Caribou don’t come around here since those mines come in place,” he says. “They closed off their migration routes. They made big holes in our land that the caribou are avoiding.”

While resource development holds the potential for employment and economic growth for residents of Lutsel K’e, community leaders have been adamant that the most ecologically and culturally sensitive areas within their traditional territories should be protected and must remain off-limits to development. 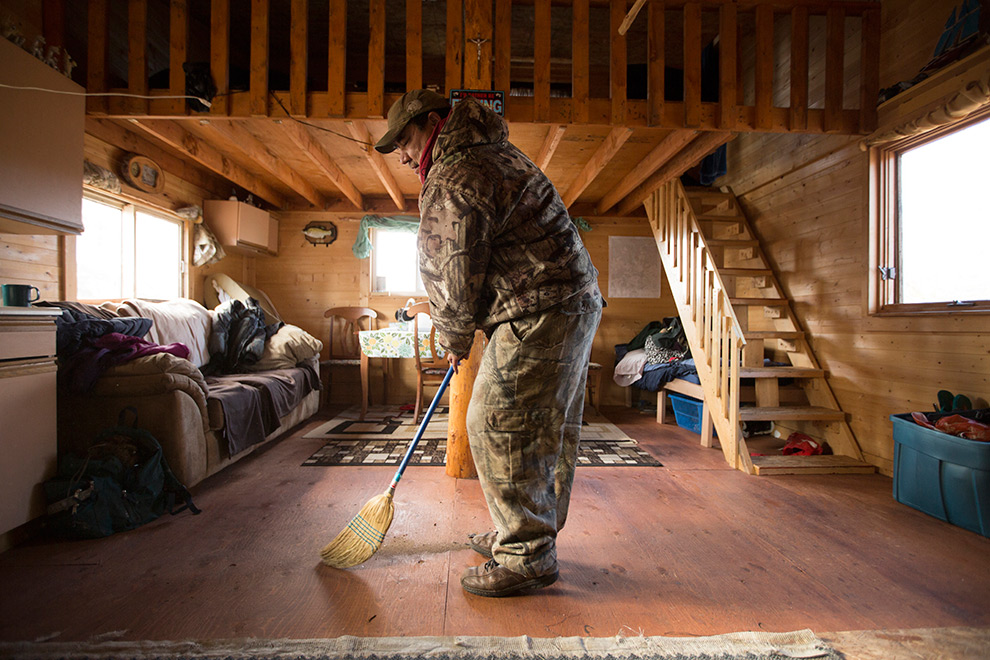 Caribou don’t come around here since those mines come in place. They closed off their migration routes. They made big holes in our land that the caribou are avoiding.James Marlowe 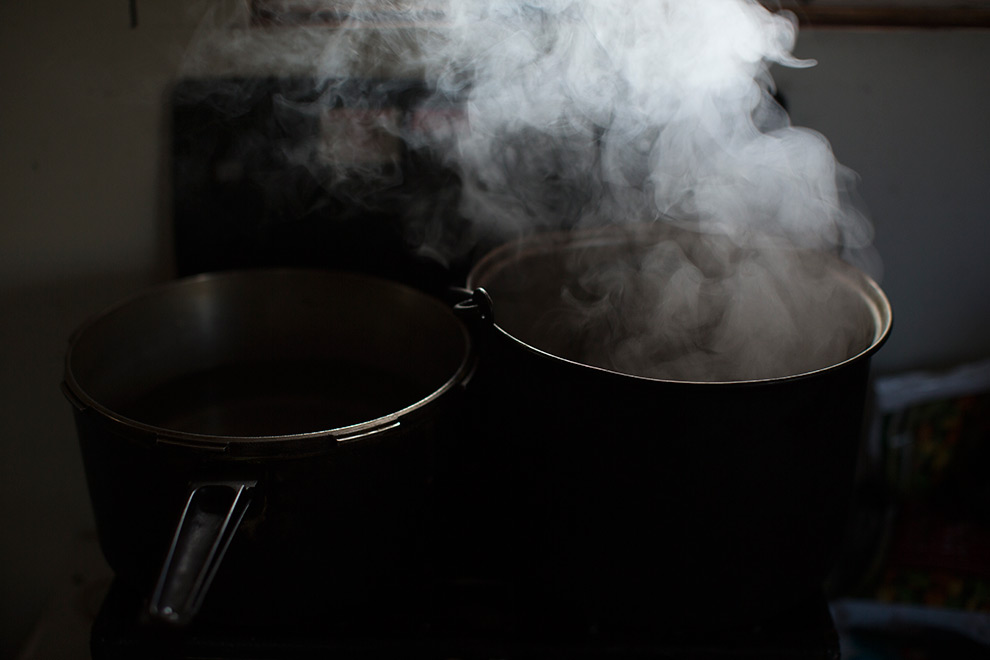 Marlowe serves on a committee advising negotiators on the creation of Thaidene Nene, a proposed national park reserve that would be co-managed by the Lutsel K’e Dene and Canada’s federal government. Traditional Indigenous activities, such as hunting, trapping, and fishing, would continue in the park reserve, but mining and other development would be prohibited.

Combined with another proposed territorial park, the conservation areas would cover nearly 6.5 million acres of boreal forest and tundra, once negotiated boundaries are finalized.

For Marlowe, these protections are vital. He is concerned that unchecked development could threaten the Dene way of life, which depends on maintaining thriving biodiversity and a healthy boreal forest ecosystem.

“This place is special because it provides food for us … wild food, natural food for our families,” Marlowe says. “If you look out the window, it’s like our grocery store.” 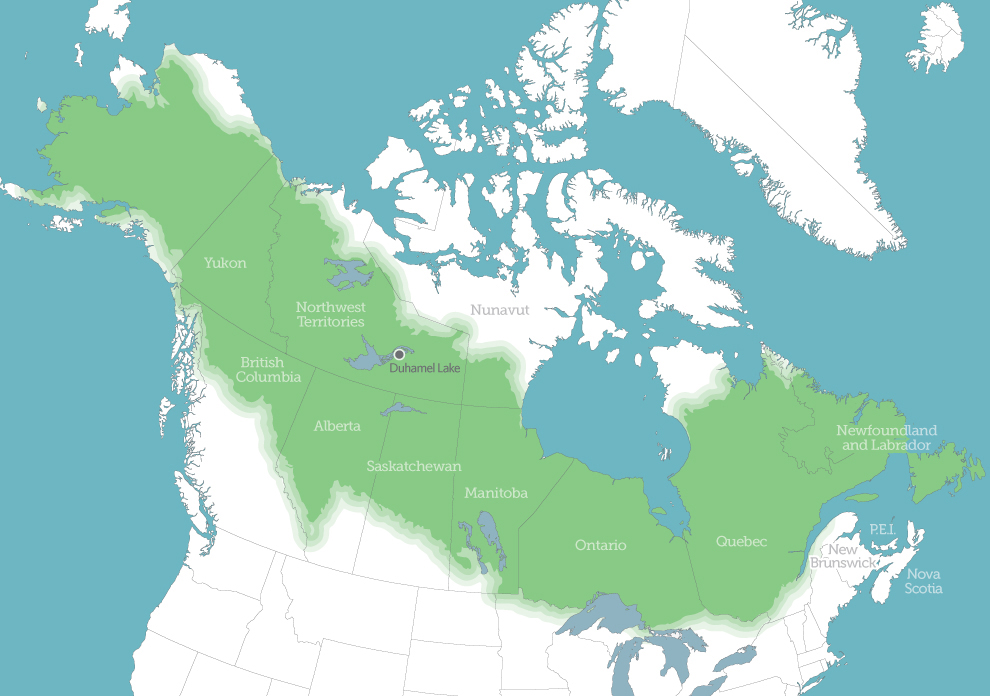 Duhamel Lake is located in the boreal forest near the Indigenous community of Lutsel K’e, Norhwest Territories.

After shooting a moose, Marlowe and other hunters will divide the meat equally among themselves. Then he will distribute packages to Lutsel K’e elders and single mothers in the community who can’t get wild meat.

“So the whole community has meat,” Marlowe says. “We share as part of our tradition. And at the same time, this creates good luck for us, the hunters.”

An intact boreal forest is essential for the survival of Dene communities, he adds.

“Our traditional food is the caribou, musk ox, moose, all the animals that are in this area, on our land. So we have to protect them. … If the wildlife is gone, we’re all dead, as good as dead.” 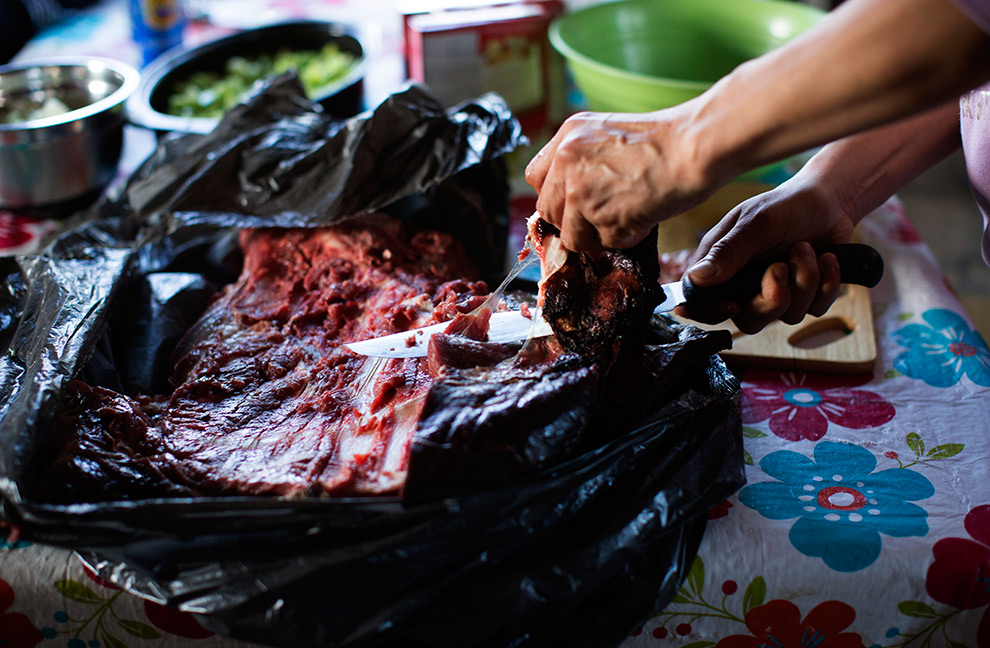 In addition to impacts from development, Marlowe says he has noticed climate changes affecting their territory. Lake ice that used to be 8 to 10 feet thick in the winter is now 4 feet thick. Musk oxen, the large, thick-coated mammals that have historically ranged in the Arctic tundra to the north, are increasingly spotted in the boreal forest near Lutsel K’e.

The threats posed by a changing climate—and by a changing economy—weigh heavily on Marlowe, who wants to teach his children the traditional Dene hunting and trapping lifestyle.

The water here is more fresh than the bottled water.James Marlowe 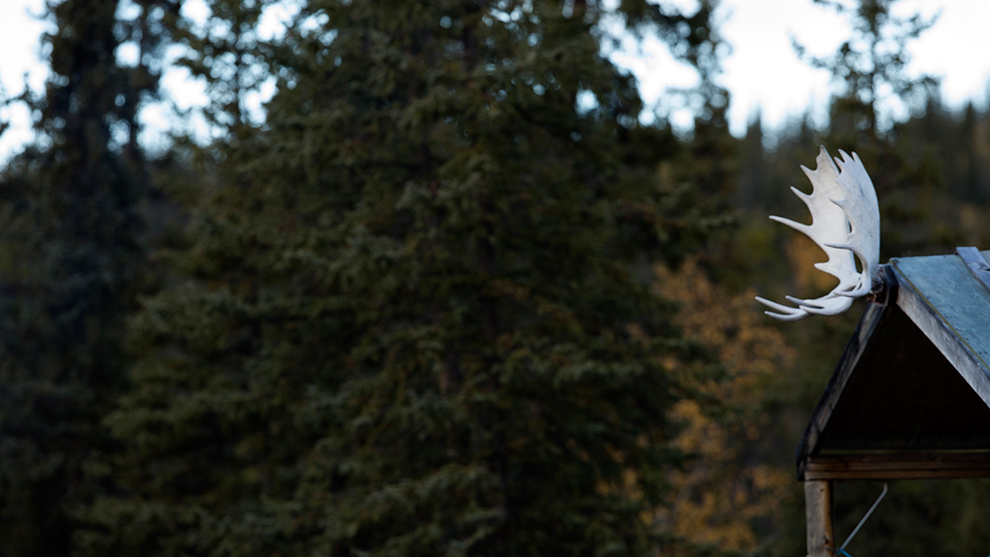 In addition to impacts from development, Marlowe says he has noticed climate changes affecting their territory. Lake ice that used to be 8 to 10 feet thick in the winter is now 4 feet thick. Musk oxen, the large, thick-coated mammals that have historically ranged in the Arctic tundra to the north, are increasingly spotted in the boreal forest near Lutsel K’e.

The threats posed by a changing climate—and by a changing economy—weigh heavily on Marlowe, who wants to teach his children the traditional Dene hunting and trapping lifestyle. 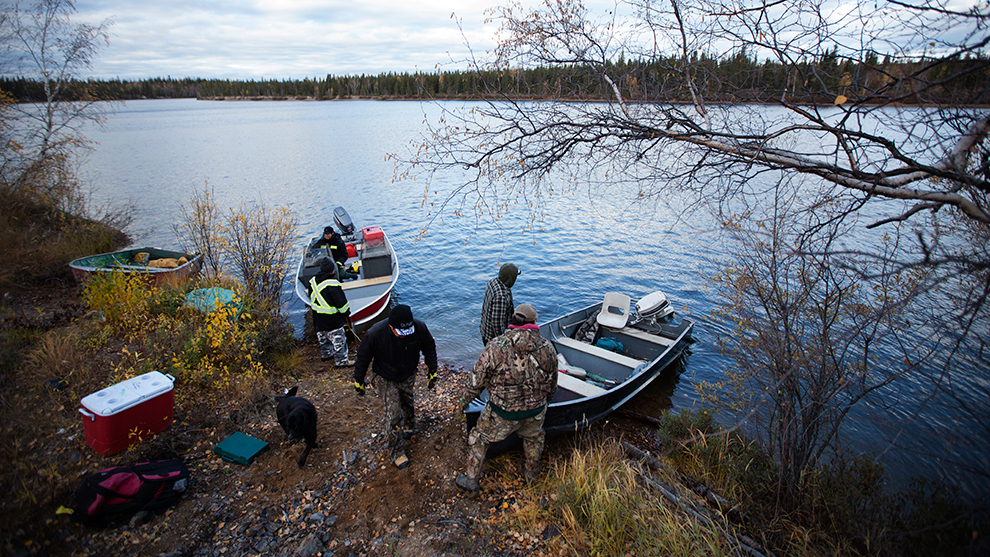 During the summer and into the fall, Marlowe’s wilderness camp comes alive with activity. He hosts moose-hunting and fishing trips for Lutsel K’e youth, where the kids learn how to hunt, build fires, cook traditional foods, and survive outdoors.

Lutsel K’e is a fly-in village with no road access to Yellowknife. But as isolated as it is, Marlowe says traditional education about how to live off, and protect, the land is becoming ever more important. He is concerned about the growing influence of video games and the Internet, and a decline of interest in Dene culture.

His dream is to establish a cultural camp at Duhamel Lake, where First Nation elders can teach youth Dene traditions and games, how to speak the Denesoline language, and hold healing workshops. 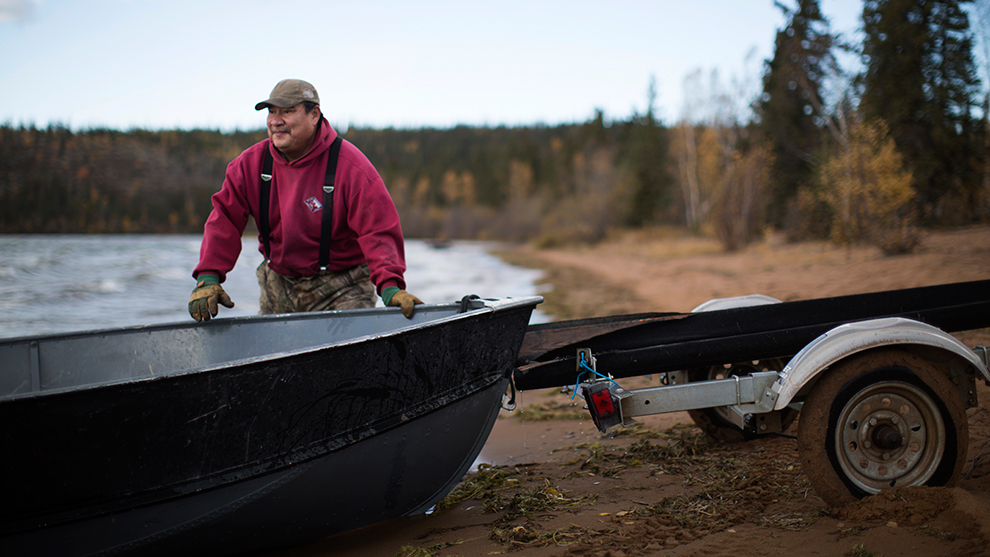 “We want the kids to have a future that they see today. In 100 years or so, we want them to live how we live, (with) fresh water, fresh air, good wildlife, an abundance of wildlife,” he says.

“We have to keep our land clean so that our kids won't be sick. And we want to keep it that way so that they can keep their culture. We want them to hunt, fish, and trap in the future. And also, to keep it as is, pristine, for as long as the Earth is here.”

Marlowe feels a deep connection to the land, though he doesn’t view himself as a conservationist.

“I don't consider myself anything. The only thing I consider is that I'm here trying to protect our land, our water, our animals for our future generations to use,” he says. “It's important for them to know who they are, where they came from, and also to learn the traditional activities of our ancestors.” 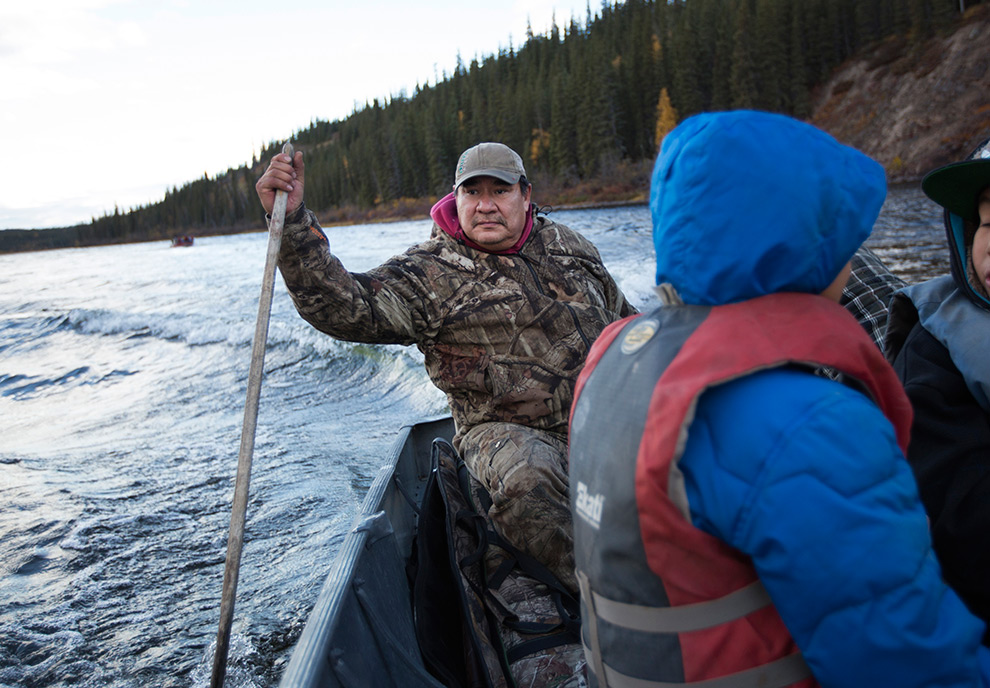 When Marlowe is at his camp, he rarely sits still. One moment, he’s chain-sawing wood to build a fire. The next, he’s sweeping the wood floor of his cabin. Then he’s outside again, paddling his fishing boat over the choppy waves to load it onto a trailer.

Because the lake is too rough, Marlowe hauls his boat to the nearby Snowdrift River, which is sheltered from the wind. A group of kids pile into the back of two pickup trucks for the short drive to the river and then depart for a late-afternoon boat ride.  Marlowe takes his rifle in case the group sees a moose. Instead, the kids catch a glimpse of musk oxen standing along the river bank.

It’s one of those moments that Marlowe cherishes, one that is only possible because he lives in a part of the natural world that is still whole.

“When I'm out in the bush, I like the quietness, the sounds of nature, and the beauty, and knowing that we're free,” Marlowe says.

Just as he shares what he hunts with members of his community, Marlowe says he wants to share his way of life with visitors who value the way the Dene care for the land.

“When people come to visit us, I want them to (see) there's Indigenous and First Nations people who live out here in the wilderness, in a clean, pristine area that has no pollution,” he says.

“We want visitors to feel happy knowing that there's an area that is being protected for the future, feel good that there's people living out here in the bush that are still practicing their way of life that the ancestors had provided for them.” 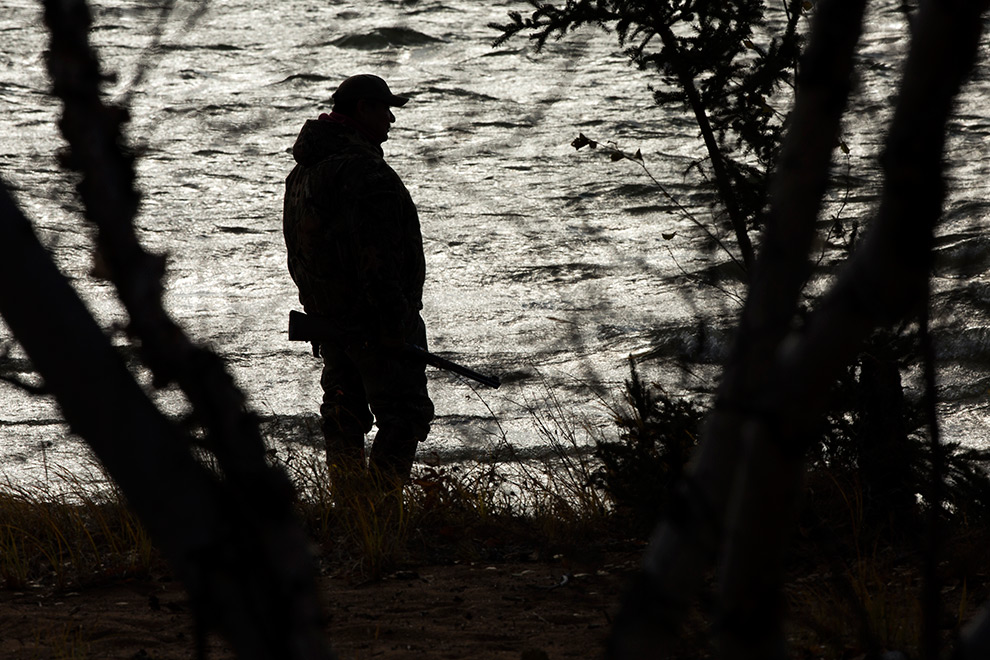