With the enactment of House Bill 2739 on May 17, 2016, Kansas joins 46 other states with a legally defined rainy day fund, creating a path for effective long-term savings. The bill received bipartisan support and was passed unanimously in both chambers of the state Legislature. The Senate Committee on Ways and Means, chaired by Senator Ty Masterson, and the House Committee on Appropriations, chaired by Representative Ron Ryckman Jr., championed the bill’s rainy day fund language.

Every state experiences revenue volatility, the unavoidable fluctuations that occur throughout the business cycle. These swings can undermine lawmakers’ efforts to accomplish budgetary goals such as reducing taxes, paying down debt, investing in infrastructure, or funding education. For that reason, states have rainy day funds to build reserves in good times that can be used during the bad. 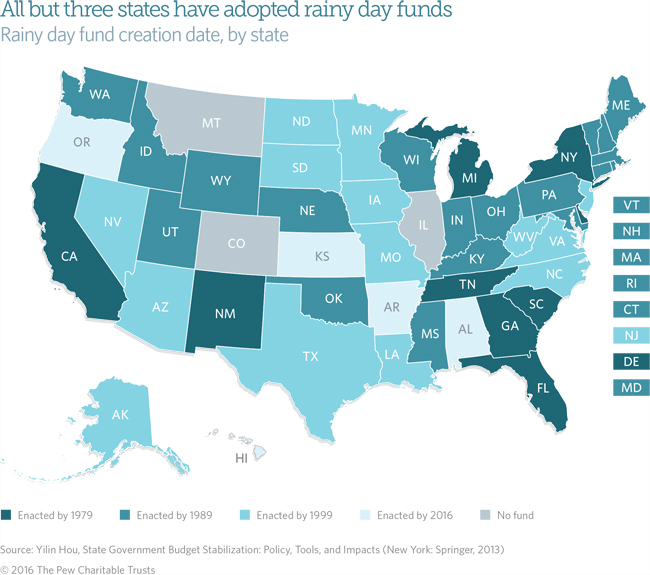 In the absence of a rainy day fund, when Kansas wanted to build reserves in the past, policymakers set aside extra money into the state’s general fund. While putting aside money in this manner can provide simplicity, it can be difficult to effectively manage reserves when a state’s spending account is the same as its savings account. Kansas’ law required an ending balance at a level equal to 7.5 percent of general fund revenue. However, the state has struggled to maintain that level, suspending the rule from fiscal year 2014 to 2017. In fiscal 2015, the state estimated that its general fund ending balance was just 1.2 percent of general fund revenue. On the other hand, a formal rainy day fund allows states to be clear—in law—about the purpose, funding levels, and objectives they try to achieve through savings.

At the time of H.B. 2739’s enactment, Kansas had more pressing budget needs before it started to rebuild savings. Recently, lawmakers proposed budget cuts to help fill an estimated $290 million budget shortfall. In May 2016, Moody’s Investors Service changed the state’s rating outlook to negative, citing “ongoing difficulties it is having restoring structural balance to its budget and getting on a path to sounder funding of its pension liabilities.” Once Kansas is in a position to save, however, a well-designed rainy day fund will not only provide a fiscal cushion during unavoidable revenue downturns, but will also be a tool that helps create a structurally sustainable long-term budget.

Recognizing the importance of the rules governing rainy day funds, H.B. 2739 further calls on the Legislative Budget Committee to review the best practices for rainy day fund design and make recommendations related to optimal risk-based practices. Kansas has a unique opportunity to learn from other states’ experiences and to establish the best fund rules regarding when to save, when to withdraw, and how much reserves are required to offset the risks posed by revenue volatility.

H.B. 2739 is an important step for improving Kansas’ long-term fiscal health. Although the state faces fiscal challenges, an effective savings framework will allow it to build reserves more strategically when the time is right. The enactment of this bill creates that framework and should be recognized as a significant policy improvement.