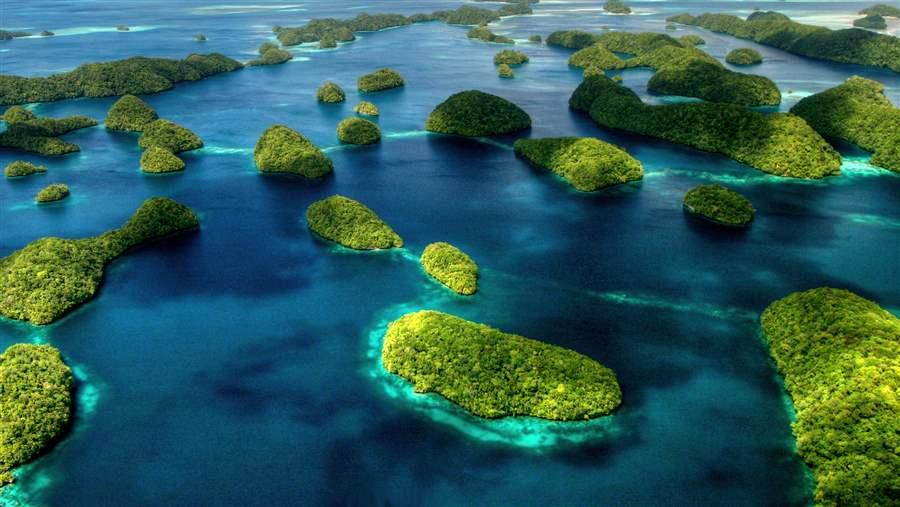 The plan will help protect the nation’s natural resources from illicit fishing and thwart other activities detrimental to its environment and the surrounding international waters.

This analysis was updated on May 23, 2016, to specify the role of the Pacific Islands Forum Fisheries Agency.

Palau President Tommy E. Remengesau Jr. has released a five-year monitoring, control, and surveillance (MCS) plan to fight illegal activities and manage emergency responses in the Pacific island country’s rich waters, most of which are included in a new national marine sanctuary.

The plan grew out of a yearlong collaboration among maritime surveillance experts from Australia, the United States, Japan, Palau, and the Pacific Islands Forum Fisheries Agency (FFA), who were brought together at a workshop in Palau in April 2015.

President Remengesau unveiled the plan April 14 as part of his State of the Republic address. It will guide Palau’s efforts to build the capacity and expertise to deter, detect, and stop illegal activities in its waters. That will help protect the nation’s natural resources from illicit fishing and thwart other activities detrimental to its environment and the surrounding international waters.

“If you come to Palau to steal our fish, we will find you and you will be punished,” President Remengesau said in his address. “To back up these strong words, we are strengthening our surveillance and enforcement system to better protect our ocean resources from poachers.”

To help build capacity, President Remengesau announced that the country will be working with Pew and the U.K.-based Satellite Applications Catapult to begin using Project Eyes on the Seas to monitor the country’s waters. This cutting-edge technology merges various types of satellite tracking and imagery data with other sources of information, such as fishing vessel databases and oceanographic data, to help monitor seas around the globe.

Palau has already seen benefits from enforcement assisted by an early version of Eyes on the Seas. On June 12, 2015, authorities burned four Vietnamese “Blue Boat” vessels that had been engaging in illegal fishing off the Pacific nation’s Kayangel Island. Officials wanted to demonstrate that Palau is willing to take an aggressive approach against poachers. The 17,000-pound haul seized from the boats included protected sea turtles, sea cucumbers, and reef fish species.

Palau also announced a partnership with the Japanese-based Nippon and Sasakawa Peace foundations to enhance enforcement capabilities. Under the partnership, the foundations will give Palau an additional enforcement vessel that can patrol more remote areas of national waters. They also will provide assistance with training and communications upgrades.

Officials face significant challenges in protecting Palau’s rich waters from illegal fishing, given the nation’s shared borders with Indonesia and the Philippines, as well as international water boundaries. As part of The New York Times' "Outlaw Ocean” series, reporter Ian Urbina described the threat that poachers pose to Palau’s waters, which have been described as an “underwater wonder of the world.” The nation’s exclusive economic zone (EEZ) is home to 1,300 species of fish and 700 species of coral.

“We have a simple message for those who try to steal Palau’s marine resources: We will not tolerate poachers in our ocean,” President Remengesau said last June after the vessels were burned.

The president signed the Palau National Marine Sanctuary Act into law Oct. 28, 2015, fully protecting an area of about 193,100 square miles (500,000 square kilometers), or 80 percent of the country’s EEZ. With this action, Palau dedicated a higher percentage of its waters for protection than any other country and created one of the largest fully protected ocean areas in the world. Under the law, local fishermen can continue to work in the remaining 20 percent of the EEZ for Palau’s domestic market.