The country’s century-old centralized power system is yielding to advanced, distributed-energy-generation capabilities, producing energy at or near where it is consumed. As this transition accelerates, efficient energy technologies—such as combined heat and power (CHP) and waste heat to power (WHP) systems—will play a crucial role in creating a cleaner, more secure, and resilient power grid.

How do CHP and WHP differ?

Compared with other generation options, CHP is a cheaper, cleaner, and more efficient method to produce electricity and heat simultaneously for industrial and commercial use. Instead of generating power and letting the waste heat escape, CHP systems harness the thermal energy for heating, cooling, and other applications. By integrating thermal and electricity production, CHP can deliver energy services 50 percent more efficiently than traditional systems that generate only heat or only power. In addition, CHP systems operate on-site, can use any fuel, and work well with other power options. The illustration below demonstrates how CHP systems compare with traditional generation. 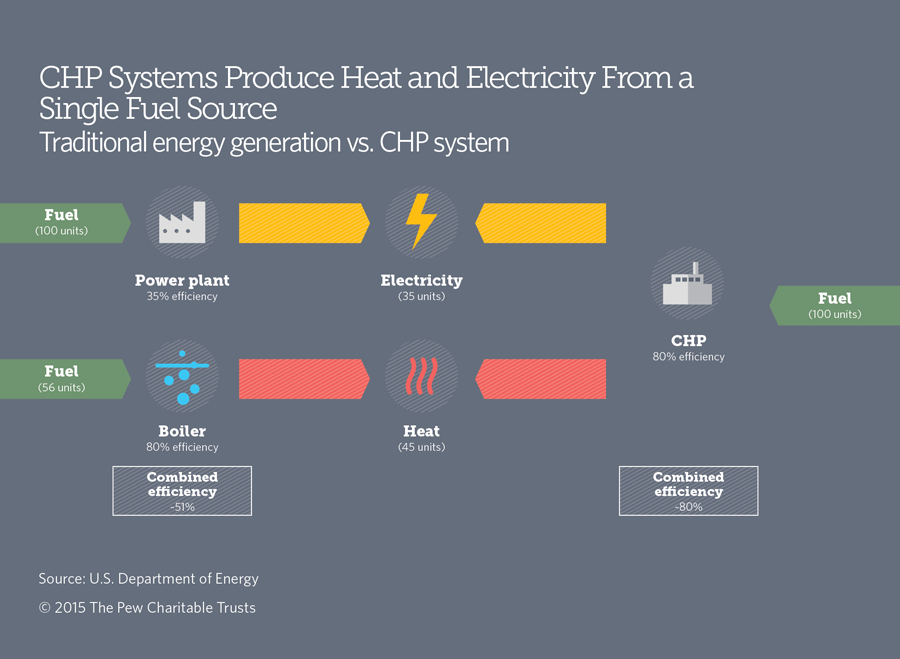 WHP, meanwhile, uses excess heat from industrial processes to generate electricity or mechanical power. Many industrial facilities discharge heat as a byproduct of their operations, sometimes as steam through vents and stacks. WHP systems convert the otherwise wasted heat into electricity, requiring no additional fuel and generating no further emissions. Like CHP, WHP generates power on-site, eliminating the need for transmission and associated losses. The illustration below demonstrates how WHP systems recycle waste heat into electricity. 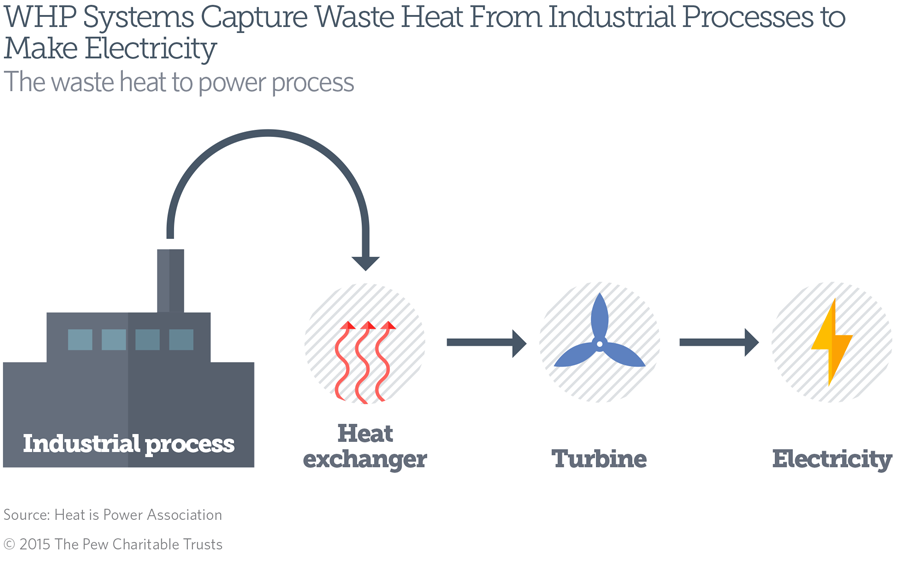 What are the benefits of CHP and WHP?

Constant supply. When weather or security events interrupt energy supplies, CHP is more resilient than large, interconnected grids. Facilities can come online quickly after outages and operate off the grid during a blackout, allowing businesses to keep the lights on, critical infrastructure powered, and operations running. This makes these systems ideal for hospitals, assisted-living centers, and other facilities that demand reliable, constant energy to power round-the-clock, vital systems—even in times of major grid disruptions.

Reduced costs. CHP and WHP can help businesses save money. Research finds that power costs make up as much as 15 percent of a typical firm’s budget. Energy-intensive U.S. industries, such as chemical, iron and steel, compete better in the global marketplace when they can lower operating costs.

Greater efficiency. These on-site technologies achieve energy efficiencies of up to 80 percent. Because they produce heat and power from a single fuel source, CHP systems are twice as efficient as central-station power generation. The Environmental Protection Agency estimates that the installed CHP and WHP capacity in the United States already has reduced energy consumption by 2 quadrillion British thermal units (2 percent)—equivalent to nearly 250 million metric tons of carbon dioxide emissions or the annual output of 66 coal-fired power plants.

Where are these technologies used?

For more on the recent rise of clean energy in the U.S., read our report America’s Electric Grid: Growing Cleaner, Cheaper, and Stronger.